If our Prime Minister is doing "God's work", it raises questions as to how much Scott's God cares about our sick and destitute, writes John Wren.

MUCH OF THIS WEEK’S political commentary has been around Prime Minister Scott Morrison’s Pentecostal faith and how that may influence his decision making and public policy formulation. The commentary emerged after a video leaked of Morrison addressing an Australian Christian Churches (ACC) meeting on the Gold Coast. The ACC is an umbrella group for a host of evangelical Pentecostal churches across Australia that includes Morrison’s Horizon Church that he attends in his electorate.

The video included footage of Morrison in prayer and included his admission of “laying on of hands” when visiting people in disaster relief shelters (most recently in WA after the cyclone). He also said he was doing “God’s work” as PM and that Australia needed more of the Church.

I wrote about how Morrison’s Pentecostal faith influences his decision making in January 2020. It seems Australia’s mainstream media is finally catching up. Since I wrote that article, many issues have arisen and Morrison’s actions (or inactions) can now be viewed through that Pentecostal prism. Much of what I (and others) warned about has come to pass. For example, Robodebt.

Morrison has always been the principal architect of the now illegal Robodebt scheme. As Social Services Minister, he created it. As Treasurer, he drove it and as PM, he promoted it. One of the tenets of Pentecostalism is their heretical Prosperity Theology. This doctrine suggests that the more godly one lives one’s life, the more prosperous/wealthy they will become. 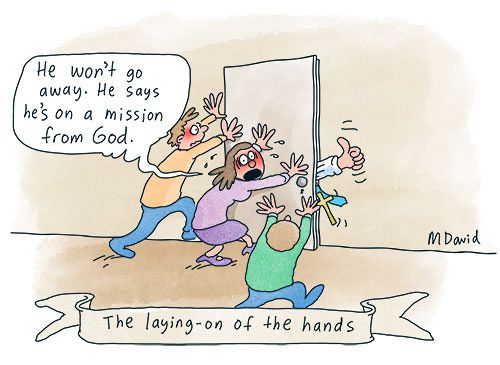 The corollary to that is the less godly one is, the poorer they will be. There is an offshoot of this warped thinking that also says the disabled are being punished for being ungodly and that faith can cure them (clearly if they aren’t cured, it’s because they haven’t been faithful enough). The disabled can’t win. Prosperity theology is the opposite of Jesus’s teachings and adhering to it leads many commentators, including myself, to conclude that Pentecostalism is a post-Christian cult — derived from Christianity, but no longer a part of it.

But back to Robodebt. If one follows the prosperity doctrine, then giving financial assistance to struggling people would be considered anti-doctrinal. It would only compel people to continue leading ungodly lives which is why they are poor in the first place, of course. In fact, the poor should be punished for being ungodly. This is the rationale behind Robodebt and is no surprise that Morrison’s Pentecostal party mate (and former Canberra housemate) Stuart Robert was appointed NDIS Minister and charged with punishing the poor and disabled. Robert is now Human Services Minister in charge of Medicare. If one is of the belief that faith cures illness and disease, you can see what’s coming with Medicare funding.

It should also come as no surprise to readers that the National Disability Insurance Scheme (NDIS) is being starved of funding. Disabled people and their carers are being severely adversely affected by the cuts. Again, this can be viewed through the Pentecostal prism — why fund care for the disabled when faith can cure them?

The disabled are being punished by God, apparently. How newborn Down’s Syndrome kids, for example, have led ungodly lives and can be cured through prayer leaves this writer scratching his head. Coincidentally, Labor’s NDIS Shadow Minister Bill Shorten delivered a blistering speech at the National Press Club this week on the failings of the Government’s approach to the NDIS. His speech left many observers ruing the 2018 Election result. Shorten may well be one of Australia's greatest PMs we never had. He still has plenty of time, of course.

But perhaps the most disturbing aspect of Morrison’s ACC speech was his commentary that he was doing “God’s work as PM”. Australia is constitutionally a secular state. That means we have a separation of Church and State (the use of the word “church” applies to all religions here, not specifically Christianity or Pentecostalism). He followed this statement with another line that Australia needs more of the Church (his church, of course, not others). As the PM of a secular state making these comments, he is actually undermining the Constitution he as PM should be upholding.

It should also be noted that Morrison’s understanding of the Australian Constitution seems tenuous at best. He has in the past year stated that quarantine and aged care are also not his responsibility, both after there had been major mishaps relating to COVID-19 breaches. Both are constitutionally his Federal responsibility.

Which brings us to Morrison’s COVID-19 responses and how Pentecostalism may have affected his actions.

If one believes that pestilence is an act of God rained down on humans to test their faith, then one’s first response would be to pray and let the virus run its course. The godly will, of course, survive and the ungodly will be punished. Was this why Morrison’s first instinct when the pandemic struck was to let the virus rip and “we have to learn to live with it”?

Was this why Morrison was so lackadaisical with his vaccine acquisition and roll out? If faith is all that is needed as a defence from COVID-19 then why bother with vaccines? God also gave Morrison the power to jump the queue and get the Pfizer vaccine. It would have been an insult to God to not make the most of that power. Hypocrisy much?

Many people have commented on social, independent and legacy media that Morrison is a “do nothing” PM. I would suggest he’s worse than that. He is not doing nothing. He is doing (his) God’s work — punishing the poor and disabled while standing back and deliberately letting COVID-19 determine who is worthy or not. He was elected to work for the betterment of the people of Australia. Ask yourselves — has he fulfilled that role?