In the lead-up to the election, John Wren takes a look at how the Liberals are using taxpayers' funds and also the George Pell trial.

IT'S ALMOST MARCH and the election seems an eternity away. If it is going to be in mid-May, then we can expect the benchwarmer PM to visit Yarralumla sometime towards the end of March or early April.

There has been much feedback from my column last week expressing dismay at how the Liberal Party have been able to get away with such obvious corruption for so long. It’s unfathomable, yet just in the last week, we saw still more evidence of it.

The first episode came with the Marchioness of Mayo, IPA droog, Georgina Downer presenting a giant novelty cheque to the Yankalilla Bowling Club. At first glance, this seems not unusual, but consider this; Downer is only the Liberal Party candidate for Mayo, she is not the sitting member (Centre Alliance’s Rebekha Sharkie). The grant was from taxpayers’ funds via the Australian Sports Commission. The only person who should have been presenting the cheque was Sharkie, who we understand helped with the grant application process.

Downer was rightly universally condemned for her actions, but think about what her action suggests. Firstly, she considered taxpayers’ funds her own to claim and present (the novelty cheque clearly said the Liberal Party on it and had her image printed on it as well). This betrays how the Liberals think about taxpayers’ funds — the funds belong to them, not the public. Which is why the Libs loathe welfare. Any welfare payment made is effectively less money in the pool for them to rort.

Secondly, under the media cover of wall-to-wall coverage of Cardinal Pell’s conviction of paedophilia charges, the Liberals quietly changed the rules around how sitting MPs can use their taxpayer-funded office expenses for political advertising in the lead-up to the election. Again, this rule change takes taxpayers’ funds and allows them to be used by the Liberal Party for political advertising, something in the past they’d have to pay for themselves. Given that in the Victoria State Election the Liberals ran much of their campaign claiming that the Victoria Labor Government was corrupt for accidentally using taxpayer-paid office staff for campaigning (the red shirts scandal), this is hypocritical in the extreme.

The PM-in-waiting, Bill Shorten, has expressed strong opposition to the rule change, stating that if Labor wins the election, they will make the Liberal Party repay the advertising spend. It will be interesting to see how reticent sitting members are to spend the money if they are going end up having to repay it. Especially if they lose their seat, as many of them will.

The next example was the accidental PM announcing that the Abbott-era “Direct Action” plan would be revived. Clearly, the Liberals are desperate. The polls aren’t shifting no matter how much of a hysterical scare campaign they run on refugees, medevac and franking credits. Voters aren’t listening and most are near universally disgusted at the corruption they now see flaunted in their faces on a daily basis.

Now the Liberals are using a taxpayer funded House Exonimics Committee inquiry for Liberal party adds. They have crossed the line again. https://t.co/bjINuYiZo6

Their internal polling has suggested that the Libs are suffering due to their stance on women candidates and climate change. As the Libs have no policies, all they can do is revive old failed ones and direct action is just such a policy. Direct action is insane. It pays polluters (hand-picked by the Libs) to not pollute. It is akin to a road safety campaign paying motorists not to speed. It is utterly ridiculous, further it simply doesn’t work. Australia’s emissions have continued to rise. The recipients of past payments are, of course, large multinationals, often Liberal Party donors. Yep, you can see where this is headed. Taxpayers’ money paid to polluting corporations, that is then donated back to the Libs. 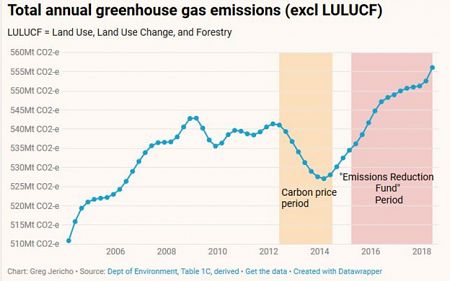 The amount spruiked by Morrison was 2 billion dollars over 10 years. $200 million per year, which is grossly inadequate to do anything. It is less than half the annual Paladin contract, or the amount handed over to the Great Barrier Foundation (another rort). In summary, it is pure tokenism to make it appear that the climate change denying Liberals are actually doing something. They’re not, they are stealing from us again and calling it climate change action.

And the Tim Wilson franking credits pity party rolled on. In enquiry meetings in Adelaide this week, the Liberal Party advertising team were there filming complainants with the obvious intention of using their statements for political advertising. They even had those being filmed sign disclaimers allowing the Libs to use them in advertising. This is all paid for by you, dear taxpayers. Are you angry yet? You should be.

We know the election is pending as the Government, mainly the Attorney-General Christian Porter, has been making wholesale appointments to various review boards. Almost all the recipients of these valued sinecures are Liberals or those associated with the Libs. He is stacking the boards knowing that the Libs will be out of power and through them will be able to retain some influence and, of course, future intelligence on the incoming Labor Government’s policies. However, one of those $250k per year appointments had just donated a campaign bus to Porter. Read into that what you will.

The biggest news of the week, of course, was the conviction of Cardinal George Pell for historical paedophilia charges. The uproar of the Right-wing Murdoch media led by Andrew Bolt and Miranda Devine is astonishing. They are actively defending a convicted paedophile, whose defence lawyer, Robert Richter QC, has shifted from denying the charges to playing them down as “minor” — they were “vanilla acts” with underage boys that only lasted six minutes. Defenders of paedophiles are paedophile enablers. Such people are little better than the paedophiles themselves. Further, we have the unedifying spectacle of a former PM, John Howard, acting as a character reference for a paedophile.

John Howard’s character itself is hardly unblemished. He was Australia’s most profligate PM. He sold the farm to pay off debt, leaving few income generating assets for future governments. Without these income generating assets, both the Labor and Liberal Governments that followed have had to borrow to pay for services, which is why we still have the debt and deficit issues even now. Our economic woes all stem from Howard’s policies. Further, Howard unleashed the racist genie into our culture through his deliberate children overboard lies that won him his final election. He then took us to war on the lie of Saddam Hussein’s WMD program. Many describe him as a war criminal for this alone. With a reputation as poor as this, it is unclear how his character reference could possibly help Pell. Time will tell.

We should also take some time to thank Julia Gillard again for her action that initiated the Royal Commission into Institutional Child Abuse. It was her strength of character and desire for justice for the victims that ultimately led to the conviction of Pell and others. Pell’s conviction is her triumph, as well as Pell’s victims. This is her legacy (along with many others).

remember Australia the Liberal National Party tried to shut this down, calling it a witch hunt. Thank you Julia Gillard for being the only PM to actually care ⚡️ “Cardinal George Pell found guilty of child sex abuse”https://t.co/6E8w9JTZXe

Sister of man who claims he was sexually assaulted by George Pell in a swimming pool fires back at powerful figures who argue the shamed cardinal isn't guilty of assaulting two choirboys #auspol #ausvotes https://t.co/wDRQDSH459