When Scott Morrison wasn't being useless at the G7 summit, he was showing support to the crippling Indue welfare card, writes John Wren.

THIS WEEK saw Prime Minister Scott Morrison photobomb the G7 meeting in Biarritz, France. He was there in Australia’s observer capacity and met with all G7 leaders, most notably though Boris Johnson and Donald Trump. It was notable that Canada’s Justin Trudeau avoided him.

Johnson was keen to meet with him as, post-Brexit, the UK will be desperate to re-establish formal trade deals with the colonies it abandoned in 1973 when it joined the EU. For the record, that abandonment plunged New Zealand into decades of recession and financial contraction. Pre-EU, the UK took almost all of NZ’s lamb and dairy exports.

To put this into context, consider what would happen to the Australian economy if China stopped purchasing iron ore and coal overnight. NZ has not forgotten that British economic perfidy, nor will it forgive. It did, however, force NZ to grow up and diversify so it is now a far more formidable international negotiator than it was in the seventies.

Scott Morrison, totally out of his depth, checks phone while other G7 summit leaders socialise
https://t.co/Re9wm8J5Ga

It is hard to determine what Morrison and Australia gained from his presence at the G7. According to Morrison, it was a great success, but as usual, he couldn’t quantify how. All talk as usual.

Attorney-General Christian Porter finally released his draft Religious Freedom bill legislation — legislation that Australia does not need. Apparently, even he has reservations regarding the need for the bill. It only exists because Morrison promised it to the RWNJ faction of his party as compensation for losing the same-sex marriage vote almost two years ago.

I have written about the bill in the past and pointed out that the result will be corporations simply going out of their way to not employ religious zealots. The religious will be near unemployable. They will never be told that, of course. There will simply be other candidates “who we feel better suit the role and our culture”. This is the opposite, yet unintended consequences of the legislation.

I’d like to also point out this troubling passage of the bill: 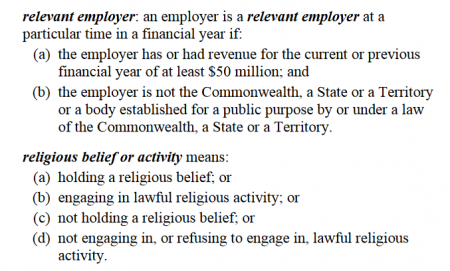 It seems to apply to those who practice a religious belief and also those who do not engage in religious activity. That is everyone.

The economy continues to flatline and the Government continues to do nothing about it. They have committed to a surplus and will do everything they can to deliver it, even if it means sucking so much cash out of the economy that it collapses. The NZ Herald wrote an excellent article outlining this lunacy. It is the sort of article that Australia’s mainstream media should be publishing every day but won’t, either because they are Murdoch partisans or too cowed to upset the Government by writing it.

The NZ media has recently been very good at filling this void. They can write it without fear or favour and publish digitally into the Australian media landscape. If I was Shayne Currie, Managing Editor of the NZ Herald, I’d be seriously considering a regular Australian edition to cover Australian issues, especially politics. The NZ media could become akin to the old Radio Free Europe when it used to broadcast into the old Eastern bloc countries.

Morrison also came out vociferously in support of the Government’s cashless welfare card, the Indue card, after supposedly positive results from a trial in Queensland. The statistics for its success appear to be heavily cherry-picked to support its case.

Questions from many for the full statistics have gone unheeded which should ring alarm bells to everyone. The reality of this card is that using it, producing it to make payments, is in itself humiliating. Having one of these cards basically says “I’m unemployed and reliant on Government-funded welfare”. To many, it’s a mark of shame. Make no mistake, this is definitely the Government’s intent.

High time Indue and the 'cashless welfare card' is exposed to rigorous audit & independent scrutiny. Who benefits financially? Who are the owners? How many former MPs are involved? What are the real effects, if any? Has Teehan lied? https://t.co/TV1NlgdK1k via @EddyJokovich

I’d like to remind readers of the words of the founder of the Liberal Party, Sir Robert Menzies on unemployment benefits:

‘People should be able to obtain these benefits as a matter of right, with no more loss of their own standards of self-respect than would be involved in collecting from an insurance company the proceeds of an endowment policy on which they have been paying premiums for years.’

This really demonstrates how far the Liberal Party had diverged from its roots. The Indue card seeks to humiliate — the opposite of what Menzies envisaged in 1944 when he stated these words. He would not recognise what his party has mutated into.

The other point about the thinking behind the card (apart from it being yet another vehicle to funnel public funds into the Liberal Party) is that it seeks to identify a section of the community to act as a scapegoat for society’s perceived ills. All fascist governments do this. Most separate the populace on racial or religious grounds. Somewhat uniquely, the Liberal regime seeks to scapegoat the unemployed and welfare-dependent. Being issued an Indue card is as humiliating to the recipient as the yellow star was to the Jews of Nazi Germany or the dreaded passbooks of apartheid-era South Africa.

I fully expect this Indue card to be rolled out further than just the unemployed. It will eventually be applied to anyone receiving regular payments from the government: old-age pensioners, military veterans, sickness-beneficiaries. As far as this Government is concerned, they are all burdens on progress and they should be labelled as such and treated like pariahs.

And finally, just to demonstrate that he has his finger on the pulse of the issues that affect all Australians, Morrison expressed outrage at signs on the toilets of the PM and Cabinet department offices that stated that his department welcomes diversity, is inclusive and that transgender people should use the toilet they feel most comfortable in. Seriously, the PM needs to get out more.

The Indue Card was incorrectly referred to as being 'owned by a host of ex-Coalition MPs and their cronies'. While the past Chairman was Larry Anthony, it seems that he no longer plays a part in Indue. As such, this assertion has been retracted.

Scott Morrison on gender neutral toilets- "I’ve been made aware of this... It’s ridiculous. It’ll be sorted out." #TheProjectTV https://t.co/eqypke8JTH