MANY OF US who have observed politics for decades are watching with both bewilderment and horror as nations with conservative political leaders in the U.S., the UK and Australia amongst others grapple with action to address both climate change and the COVID-19 pandemic.

Conservative political ideology stresses individual freedom and loathes collective action. At its heart is the old capital versus labour argument. Nations that truly prosper are those who have recognised that capital needs labour and vice versa. The two work together to advance everyone in society. This is the basis for the unquestionable success of the Nordic economies.

In these nations, it is the norm for unions to have a seat on the boards of corporations. Business owners and the corporations pay a fair share of tax that is then used in turn to fund social services such as education and health care. Sweden and Denmark, for instance, have cradle to the grave high-quality “free” (state-funded) healthcare and education.

They regularly top the world rankings for “happy populations”.

With the cultural acceptance of the Nordic welfare state model by all parts of their societies, these nations have also been able to make long-term commitments that benefit their nations for decades. Decisions are made in the full confidence that these will not be undone by successive governments. The Norwegian Sovereign Wealth Fund, established in 1998, based on the country’s North Sea oil revenue is a prime example.

But perhaps the most damaging aspect of conservative political ideology is its visceral loathing of collective action. Collective action is the primary tool of the union movement. It came about through the old capital versus labour debate. In industrial disputes, the only tool many unions had was to withdraw their labour, to strike. It then became a contest as to who could outlast the other party.

It was siege mentality: how big a loss could capital tolerate before they buckled to union demands, versus how long could labour last without incomes to feed their families and pay their rents before they returned to work.

Collective action has had many notable successes. Without it, we would still have children going down mines and up chimneys. In Australia, collective action gave us the eight-hour working day, paid sick leave, annual leave, weekends. It has led to safer workplaces and living wages. All of these things, of course, came at a cost to capital, to businesses.

At present, Australia has one of the most reactively conservative Federal governments the nation has ever had. From the day of its inception in 2013 under former Prime Minister Tony Abbott, it has sought to limit the ability of Australians to take collective action. The Liberal Party is the party of business: it is the party of capital. It seldom disputes this. Its focus has been on its business corporate backers, cronies and donors.

It believes implicitly in the myth of trickle-down economics: that healthy profitable businesses will then employ more people and everyone will be lifted up. This is of course marketing-spin. No business employs more people unless it has a need to do so. They don’t hire people out of charity. The Government loathes unions and has sought constantly to limit their power.

The Australian Federal Government has sought to limit its actions with regard to climate change. Strike-breakers are known colloquially as “scabs”. It is fair to say that globally Australia is seen by many as a climate scab.

The COVID-19 pandemic also requires collective action. The unrelenting attacks on Victorian Premier Daniel Andrews by the Federal Liberal Government and the media cartel backers is an expression of their loathing of collective action. 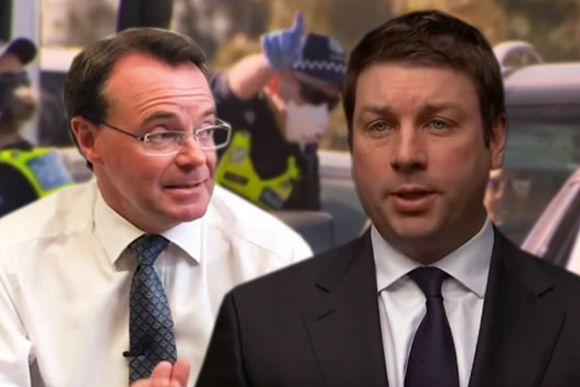 In Victoria, the vast majority of its citizens have taken collective action to beat the virus. Each Victorian has played their part. We have socially distanced, worn masks in public, worked from home where we can and largely abided by our curfews and 5 km restrictions on movement.

Like all successful collective actions, we have been ably led by Premier Daniel Andrews and his team of medical specialists and it is working. Regional Victoria loosened its restrictions during the week and Melbourne’s new infection numbers are now regularly below 50: the benchmark for relaxing restrictions in the not too distant future.

Those conspiracy theorists who have sought to undermine our collective action along with the appalling State Liberal Opposition are little more than scabs. Strikebreakers – those who seek to benefit from the collective action without being a part of it. As my trade union Father once told me, “there is nobody lower than a scab”.

As Victoria’s COVID-19 numbers have fallen the attacks on Andrews from Liberal Party politicians and its media cheer-squad have become more extreme. They are unhinged. A casual observer of the increasingly irrelevant "Sky News After Dark" squad, would see host after host – Peta Credlin, followed by Chris Kenny, followed by Paul Murray, followed by Alan Jones – all spouting the same rubbish hour after hour.

No wonder they are losing viewers by the thousands.

Most observers have concluded that the Liberal Party would actually prefer to see Andrews and our Victorian lockdown fail than to see Andrews and collective action win the battle. And with that desire, they demonstrate just how unfit they are for public office.

Keeping Australians safe is the primary directive of our political leaders. Scott Morrison and Victoria's Opposition Leader Michael O’Brien have failed that test completely. Andrews and the collective action of all Victorians will win the day.