Would Abbott bring back WorkChoices? 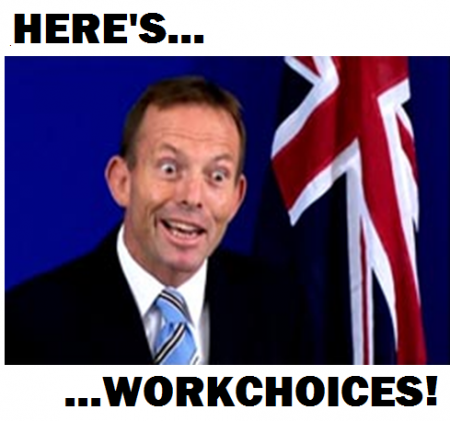 JUST BEFORE the 2007 Federal election, I was sitting in a hairdressing salon on a bright, brilliant spring day in suburban Brisbane. The salon manager who had previously voted Liberal told me she wouldn’t be this time because:

“The Liberal Party only looks after the rich.”

The election result is now history and, while the she didn’t say it, I felt like there was a clear subtext — WorkChoices.

The political risk of their workplace policy is clearly not lost on Tony Abbott. The Coalition’s industrial relations policies run the risk of not just WorkChoices déjà vu, but it also underlines the potential gap between their philosophy, the expectations of the business and the relatively egalitarian values of suburban and regional Australia.

Abbott timed his IR policy announcement brilliantly — just before budget week. This meant analysis of his scheme was limited too just a day or so in the media, leaving his most contentious claims only partially challenged and somewhat forgotten.

Needless to say, Abbott has been treading very carefully on industrial relations – with the help of some handy three word slogans – while he says Australia has a

WorkChoices, he assures us, is "dead, buried and cremated" and, therefore, he will undertake “cautious, careful, responsible change” of the Fair Work Act.

When Abbott announced his long awaited workplace relations policy – and, surprisingly, the magic number did not appear, nor did anything of much substance either – it has been difficult to know exactly Abbott has been planning on IR and today’s announcement doesn’t make things much easier.

One thing is clear — his main target seems to be unions.

"I want to assure all the workers of Australia – unionised and non-unionised – that they can trust their future in our hands. This policy will, however, make life more difficult for militant building unions and dishonest union officials who continue to abuse their position … we make no apology for that."

With the HSU corruption scandal and given that only around 18% of the public are union members (more than half of which are mainly non-Coalition voting public servants), I don’t think Abbott is going to make too many enemies with that one. He has also promised to crack down on union right of entry — a fringe issue, unlike wages, conditions and penalty rates, which were unfettered by Thursday’s announcement.

Is Abbott advocating a return to AWAs?

By-far the most controversial aspect to the Federal Coalition’s industrial relations policy announcement is their promise to expand the use of individual flexibility arrangements in enterprise agreements.

The move has prompted the ACTU to accuse the Tony Abbott of bring back “individual contracts to the heart of the IR system” thereby undermining the ability of workers to collectively bargain and potentially bring about a return to “WorkChoices-style individual agreements”.

So just how does Abbott’s flagged agreement-making changes compare to the Howard Government’s AWAs and the current IFA’s under the Fair Work Act?

Well, the first point to note is that IFAs were introduced by Labor in 2009 — at the same time they abolished AWA’s.

AWA’s were first introduced in 1996 by the Howard Government; it was an agreement between an individual (or group of individuals) and an employer setting out wages and conditions. The AWA was designed to promote individualism and flexibility. They could depart from enterprise agreement and award wages and conditions providing it left the worker at ‘no disadvantage’ (the No-Disadvantage Test).

Then WorkChoices came along and radically re-shaped the industrial relations framework, most famously by removing the No-Disadvantage Test. Instead, the Howard Government created a new, narrow, safety net that meant agreements had to abide by just five minimum national employment standards.

In this way, WorkChoices was criticised for ignoring the power imbalance in negotiations between many employees and employers.

After the ALP was elected in 2007, it introduced the Fair Work Act and ditched AWA’s. By the then Rudd Government’s Policy Implementation Plan,the Government reaffirmed its commitment to end statutory individual employment agreements, noting that

Because an IFA is part of an enterprise or award-based agreement, it is not a separate statutory contract (that is, it is not an individual workplace agreement) and therefore cannot be used on a ‘take it or leave it’ basis upon entering an employment agreement. It must be negotiated once the employment contract has already been secured.

Crucially, the ALP also introduced a ‘Better-Off Overall Test’ which means an employee on an IFA must be better-off rather than not at a disadvantage, measured against either the award or enterprise agreement.

The IFA also exists against a backdrop of ten employment standards that cannot be bargained down, rather than the five of WorkChoices — so the BOOT presents a higher bar on a number of levels.

Currently, IFA’s are used by more employers than AWA’s ever were (about one in ten) – commonly used in the retail and construction industries as well as by big employers.

Unlike pre-WorkChoices AWA’s, IFA’s do not need to be approved by an external body to be legally binding.

Abbott has promised to retain the BOOT, but he has said it will no longer be restricted to the terms of the enterprise agreement and will extend the employee termination notice period from 28 days to 13 weeks (as recommended by the Fair Work Act Review report).

As IFA’s will no longer be restricted to the terms of an enterprise agreement, they will now be able to cover a broader range of matters — a fact which can potentially cut both ways.   In this way, his reform suggests a soft return to AWA’s, but the other crucial elements – the BOOT and the national employment standards – look certain to remain in the short term.

Under the current Act, agreement making between an individual worker and an employee is prohibited and the Coalition have not said they would or would not change this. This change would determine whether or not an IFA could be offered as at term of an employment contract.

But as it stands, the Abbott proposal is really not much like the original AWA’s and nothing like WorkChoices AWA’s. However, as I will explain later, there is evidence to suggest there would be more changes under an Abbott government.

Muzzling the right to strike

Abbott also says the Act would be changed to ensure that if protected industrial action is to occur, the parties involved have been "talking first and striking later".

This is even more puzzling as strike options have been kept in check under the current legislation.  In order for the Commission to authorise protected ballot action, parties must show they have been ‘genuinely trying to reach agreement’ and requires authorisation by a majority of employees in a secret ballot (WorkChoices amendments, which were retained under the Fair Work Act). So really, ‘talking’ or negotiation is already a pre-requisite for taking industrial action.

The most likely change the Coalition would make is to re-introduce WorkChoices narrow ‘permitted content’ and ‘unlawful terms’ provisions, which limit the content of both enterprise agreements and the basis for a strike.

But it is worthwhile to note that WorkChoices restrictions, which significantly reduced the right to strike, were left largely un-tinkered with by the Fair Work Act. Below is a table based on DEEWR figures, which featured in the Fair Work Act Review. It shows the number of working days lost to strike per year per 1000 employees – indicating that despite reports of rising industrial disputes, a wider historical perspective cast some doubts on those claims. 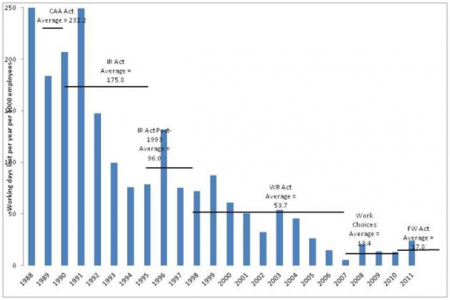 Indeed, the first quarter of the Fair Work Act's operation saw a lower level of industrial action than the last quarter of WorkChoices.

In a speech by the then Workplace Relations Minister Julia Gillard prior to the introduction of the Act, Gillard alluded to Labor’s commitment to uphold most of the WorkChoices’ restrictions on industrial actions, saying it was her Government’s determination to stamp out snap strikes or bans that "have devastating effects on employers with time-critical processes".

Indeed, as Ron McCallum – co-author of the Fair Work Act Review and Professor in Industrial Law in the Faculty of Law of the University – told the ABC’s PM program in 2011:

“The power of the employer to close and to disinvest is much stronger than any powers that employees have and I think we're seeing an increased corporatisation of labour law and using the corporations power is one step along that line…the Labor Government understand that in this globalised world, corporations, which are bringing in taxpayer's money to the government need to operate as a profit.”

In any event, it’s fair to say Abbott is no IR ideologue like Costello or Howard. Historically, Abbott’s passions lie in tradition, history and social values; it must be remembered he was once a Santamaria follower – an anti-Communist, who was also against the excesses of individualising capitalism. It’s fair to say he’s not as centrist as he makes out either and he will inevitably face pressures from elements within his backbench, who are much more zealous about the Liberal party individualist philosophy.

And there is an important caveat to all of this; while the Coalition have promised not to change the Act beyond what they have announced, they have also said if they win Government they will task the Productivity Commission with reviewing the laws,which begs the obvious question, what if the PC recommend (as they probably will) wide-ranging changes? This seems to be the most obvious contradiction in Abbott’s policy paper and a clear out-clause to allow him to pursue more fundamental neoliberal workplace reform in any future terms to come.

Abbott knows his IR policy is a litmus test for many swinging, somewhat egalitarian suburban voters on what kind of society the Coalition thinks we should live in — therefore radical change is likely; sneaky, incremental reform is a definite; and, despite the oft-repeated claims of the business lobby, arguably the pendulum has already swung.