Word games by US media after Afghan children massacred

Why did the US attempt to conceal whose forces were flying two helicopter gunships that brutally hunted down and slaughtered nine young Afghan boys as they gathered firewood on a hillside earlier this month? Dave Lindorff reports.

The people of Afghanistan know who was flying the two helicopter gunships that brutally hunted down and slaughtered, one by one, nine boys apparently as young as seven years old, as they gathered firewood on a hillside on March 1. In angry demonstrations after the incident, they were shouting “Death to America.”

Americans are still unaware that their “heroes” in uniform are guilty of this obscene massacre. The ovine US corporate media has been reporting on this story based upon a gutless press release from the Pentagon which attributes the “mistake” to “NATO” helicopters.

This terrible incident occurred in the Pech Valley in Afghanistan’s Kunar province, where US forces have for several years been battling Taliban forces, and from which region they are now in the process of withdrawing. Clearly then, it is US, and not “NATO” helicopters which have been responding to calls to attack “suspected Taliban forces”.

So why can’t the Pentagon say that? And if they won’t say that, why won’t American reporters either demand authorities clearly state the nationality of whatever troops commit an atrocity, or exercise due diligence themselves and figure it out?

There is a second issue too. Most publications appear to have followed the lead of the highly compromised New York Times and are going with the Pentagon line that the boys who were killed were aged 9-15, which is bad enough. It’s hard to see how helicopter pilots with their high-resolution imaging equipment, cannot tell a 9-year-old boy when they see one, from a bearded Taliban fighter. But at least one news organization, the McClachy chain, is reporting that the ages of the boys who were murdered from the air were 7-13. If that latter range of ages is correct, then it is all the more outrageous that they were picked off one by one by helicopter gunners. There is no way they could have mistaken a 7-year-old for an adult.

No wonder even the famously corrupt Afghan President, Hamid Karzai, refused to accept the apology proffered for this killing by Afghan War commander Gen. David Petraeus.

Calls by this reporter to the Pentagon for an accurate report on whose troops were flying those two helicopters, and for an accurate accounting of the ages of the nine victims, have thus far gone unanswered. This, I have discovered, is fairly standard for the Defense Department. If it’s a story about some big victory, or a new eco-friendly plan for a military base’s heating system, you have to beat the Pentagon PR guys off with a stick, but if you call them about something embarrassing or negative, you get passed from Major Perrine to Lt. Col. Robbins to Commander Whozits, and nobody give you an answer. Finally you’re given someone to email a question to, and that message goes into the Pentagon internet ether and never gets returned.

So let’s give an honest report here: Two US helicopter gunships, allegedly responding to a report of “insurgent” activity on a hillside in Kunar Province, came upon the scene of 10 young Afghan boys who were collecting brush for fuel for their families. The gunships, according to the account of a lone 11-year-old surviver who was hidden by a tree, systematically hunted down the other nine boys, hitting them with machine gun and rocket fire and killing them all--their bodies so badly damaged that their families had to hunt for the pieces in order to bury them.

This atrocity is being described as a “mistake,” but it was no mistake, clearly. The crews of the helicopters were shooting at fleeing human beings who made no attempt to return fire (obviously, because all the boys had were sticks, which they surely dropped when the first shots were fired).

They almost certainly saw that they were dealing with kids, because it would be hard to mistake even a nine year old for an adult, particularly in a country where young kids go around with their heads uncovered, and don’t have beards, while adult males generally wear head coverings, and have full beards. But killing kids is part of the deal in America’s war in Afghanistan. Even in Iraq, 12 year olds were being classified by the US military (in contravention of the Geneva Conventions) as being “combat age,” for example in the assault on the city of Fallujah.

Let’s also be clear that this slaughter of nine Afghan children is the ugly reality behind Gen. Petraeus’s supposed policy of “protecting civilians.” Here’s a number that tells the true story about that policy: since Gen. Petraeus assumed command after the ousting of Gen. Stanley McChrystal, US airstrikes in Afghanistan have gone up by 172%. That’s not counting attacks by remote-controlled, missile-firing drone aircraft, which are also up by a huge amount. Those airstrikes and drone attacks are notoriously deadly for civilians--far more so than ground attacks, but of course they have the advantage for our “heroes” in uniform of reducing the number of US casualties in this hugely one-sided conflict. 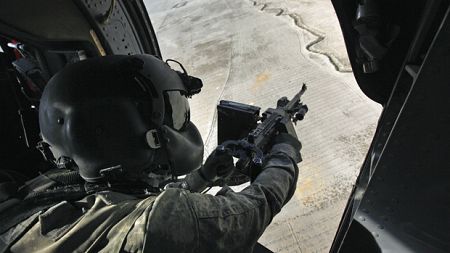 There are so many aspects to this story that are disturbing, it’s hard to know what’s worse. Clearly we are deliberately murdering kids in Afghanistan, and this particular incident is just an example we know about. The men who did this will hopefully pay for their crimes by living with their guilt, but hopefully there will be an honest investigation and proper punishment too by military authorities (I’m not holding my breath). Petraeus and his boss, Commander in Chief Obama, should also be called to account and punished for implementing a war plan that calls for this kind of brutal slaughter of civilians.

But the US media are also guilty here. How can Americans reach proper conclusions about this obscene war against one of the poorest peoples in the world if our supposedly “fair and balanced” media simply perform the role of Pentagon propagandist, running Defense Department press releases as if they were news reports?

The blood of these poor Afghan kids is smeared not just on the hands of Obama and the generals, and the soldiers who pull the triggers and push the buttons that unleash death, but on the desks and keyboards of American newsrooms that cover up their crimes.

This was originally published in the online journal This Can't be Happening on March 3, 2011 and is republished with full permission.)
INTERNATIONAL Afghanistan NATO Taliban US US Defense Department US Forces
Recent articles by admin