After an intensive social media campaign including protests and blockades at Wilson sites across the capital cities, the company has announced it is bowing out of running Australia's detention centres.

ON THURSDAY this week, Wilson Security  announced they will no longer be running Australian detention camps as of 2017. This followed a grassroots campaign to ‘Boycott Wilson’ which ran over several months, and involved protests and blockades at Wilson sites and car parks in capital cities across Australia.

Public outrage about Wilson Security really exploded after the release of “the Nauru files” — over 2000 leaked documents containing damning reports of physical and sexual abuse of asylum seekers by Wilson Security guards in Nauru.

In a media release, Wilson stated:

‘The provision of security services at Regional Processing Centres (RPCs) is not in line with Wilson Security’s long term strategic priorities.’

Wilson Security Has Washed Its Hands Of Offshore Detention Following Months Of Protests https://t.co/xfkGV2gusD via @po_st

In addition, Ferrovial (previously Broadspectrum and before that Transfield Services), which is also involved in operational, welfare and security services on Nauru and Manus Island, has expressed the desire to end detention centre operations as early as possible. They are, however, being held to their contract with the Australian Government until October 2017.

The PNG Government’s Supreme Court has ruled Manus Island detention centre illegal and unconstitutional, as it is in breach of the right to personal liberty.  Immigration Minister Peter Dutton has confirmed the centre will be shut down “as quickly as possible”. The asylum seekers are most likely to be resettled in PNG, as the Australian government continues to refuse to accommodate them.

The Turnbull Government’s asylum seeker policy is looking less and less viable, given that the two major companies involved in running the centres, have caved in to public pressure to close the camps. The question that remains is, how long will it take for the Turnbull Government to follow suit? Pressing their lips together in stern silence will no longer suffice as explanation for the horrific abuses of innocent people.

There are currently 1,577 asylum seekers in Australian detention centres, including 49 children. Australia plans to resettle approximately 13,750 asylum seekers in the 2014-2015 financial year. However, asylum seekers who arrive by boat are not resettled, and are instead detained indefinitely, due to the government’s "No Advantage Policy", which aims to punish asylum seekers for attempting to flee for their lives.

The decision to flee by boat is for some the only option because they lack the funds or the time to organise other travel arrangements.

Rejecting asylum seekers will not mean there will be any fewer people fleeing danger. Reports of less refugees coming to Australia by boat are due to stepped up security by the Australian navy on our borders. Asylum seekers simply fled elsewhere.

Since we have the capacity, the Australian Government should contribute to the international effort to accommodate asylum seekers who arrive by boat in countries such as Italy and Greece. This is necessary, as the number of displaced people has hit a record high in 2015. 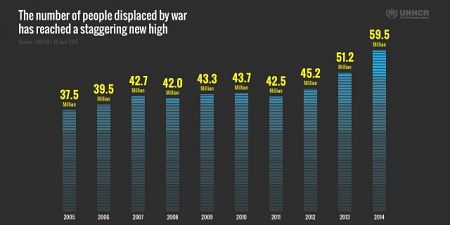 The amount of money spent on the Government’s border protection policy reached $1.2 billion in one year. This is more than five times the United Nations refugee agency’s budget for all of South-East Asia. It would be far cheaper to simply resettle the asylum seekers here.

In addition, providing refugees with work rights means they can contribute positively to society. Instead of cutting the budget for essential services, welfare and science, the Turnbull Government could reduce its debt by no longer funding a cruel and expensive policy.

Detaining just one asylum seeker offshore for a year costs more than $400,000. If they were instead settled in Australia receiving a Newstart payment or equivalent, it would cost the government less than $20 000. And this is a worst case scenario. Asylum seekers would be highly motivated to work and integrate into Australian society, as they have no country to return to.

There are countless success stories of asylum seekers boosting economies.

In 2017, when Wilson and Ferrovial abandon detention centre operations, the Federal Government will need a plan for resettling the asylum seekers in detention at that time. If they choose to find another company to run operations, the budget for the centres would most likely be even higher.

Australia has damaged its international reputation with its cruel policy and detention centres with inhumane living conditions. So, it is unlikely that security companies will be jumping at the opportunity to run detention centres others have turned their backs on.

This shows that corporations can be held accountable through public pressure, boycotting and divestment campaigns.

The lowest-common-denominator approach taken in Tony Abbott’s “Stop the Boats” campaign shows what the Government thinks of people’s opinions. They need to be proven wrong. The efforts of Boycott Wilson campaigners and others who stand up for refugees have gone part way to achieving this.

Hate-pedaling tactics by governments will not work in the long term, once the public wakes up to the truth behind their claims — that the cost is human rights abuses, public disappointment, controversy, division, crimes committed by our government and billions of dollars wasted.

Boycott Wilson and other campaigns will not be letting up the pressure. They are calling for Wilson Security to admit to the harm they have caused to asylum seekers by taking on detention centre security. The camps cannot remain open forever. They are damaging to the reputation of companies and governments for that matter, involved in their operations.

The United Nations Committee against Torture has condemned Australia’s treatment of refugees. More asylum seekers are being traumatised and killed in the camps the longer they are open.

If the Turnbull Government has any sense, it will take the less expensive and more humane approach — close the camps and bring the asylum seekers here.

The foundations of the offshore processing regime are crumbling. #BringThemHere https://t.co/40SNzxeXRE