This Coalition Government’s policy is not only cruel and inhumane but, as Scott Morrison admitted, will never actually work. Mr Morrison is quoted as saying the Government would “never” declare victory over asylum seekers arriving by boat as

This is in direct contradiction to a trophy on display in his office, which declares: ‘I stopped these’, on a model of a refugee boat.

Scott Morrison's office features a trophy of a model migrant boat with the words 'I Stopped These' on it and a cabinet adorned with a Jesus shrine and a biblical proverb to 'Trust in the Lord.' https://t.co/UJ3a2qYmRg pic.twitter.com/wYcGGnO4Xv

The admission by the Prime Minister that the boats would never be completely stopped suggests that the current punitive policy, for which the only rationalisation is to deter asylum seekers arriving by boat, is both ineffective and unnecessary. It also points to a disturbing form of politics that has developed within the Liberal Party, where the aim is to appear as tough as possible on disenfranchised minorities singled out as targets. Asylum seekers coming to Australia by boat are sitting ducks to be used to the political advantage of the Coalition, with its agenda of demagoguery.

This contradiction highlights what has always been apparent if you look beyond first glance, which is that "Stop the Boats" has no real meaning or grounding in any rational policymaking. This is impossible when there has been continued secrecy around any asylum seeker boats that attempt to enter Australian waters and, therefore, no way for the public to gauge the truthfulness or otherwise of statements by politicians about whether they have, in fact, "stopped" the boats.

Morrison began the tradition of Liberal Party immigration ministers refusing to tell the media details of any asylum seeker boats as they arrived. Therefore, there is a clear lack of reporting on boats that arrive in or near Australian waters. There is a recorded sharp decrease in the number of unauthorised maritime arrivals after Scott Morrison became Immigration Minister. However, the shroud of secrecy that surrounds "Operation Sovereign Borders" makes this information suspect. 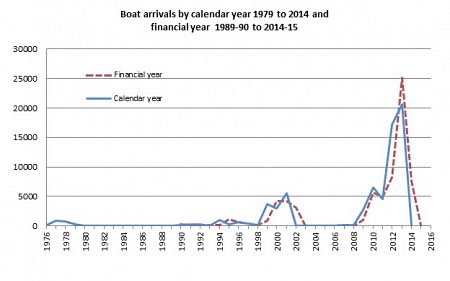 When referring to a Senate request for information surrounding Operation Sovereign Borders, in 2014 Scott Morrison was quoted as saying,

"The way we manage information is an important part of this operation. To comply with the request, would impede the continued success of our operations… [The approach] has been developed so as not to give tactical advantage to people smugglers."

However, he did not provide any argument as to how this would assist people smugglers.

Surely, reports that no boats have reached the Australian mainland are not evidence of success. The Coalition Government’s initial claim was to stop asylum seeker boats from even attempting to reach Australia, with the reasoning of preventing asylum seekers from embarking on "a dangerous journey" and drowning at sea. This leaves the obvious question of how can we know how many boats have made their way to Australia when all of them are turned back? Turning back the boats is not the same as stopping the boats. Lack of information on the number of boats journeying to Australia means the current Government cannot claim to have "stopped the boats".

Peter Dutton says the "boats have stopped" but his own department's data shows that isn't entirely truehttps://t.co/kfbxMbIMGe https://t.co/uXB5pBKdWB

Surely we cannot be satisfied with knowing that people on a journey across the ocean were turned back in the other direction when usually they only had enough fuel to reach Australia to begin with? The only outcome of this that doesn’t end with people dying is for them to be forced to go to another nearby country, such as Indonesia, or be put in offshore detention. The decrease in recorded boat arrivals marks an equal magnitude increase in the number of people in a terrible situation about whose welfare we have no information.

Australians need to know, what methods are being used to turn back boats? There are reports many asylum seekers on boats headed to Australia were transferred to lifeboats, taken to Indonesian waters and left with only enough fuel to reach Indonesia. In one year alone, the Australian Government ordered a dozen asylum seeker boats to be turned back to Indonesia. Scott Morrison was forced to apologise to the Indonesian Government after the Australian Navy, on at least six occasions, entered Indonesian territorial waters, breaching the United Nations Convention on the Law of the Sea (UNCLOS).

Scott Morrison was correct when he said there will always be asylum seekers who attempt to come to Australia by boat. This will be the case as long —as there are people fleeing for their lives who cannot afford to get on a plane to come to Australia, or to wait for their claims for asylum to be processed. The problem, then, becomes how to deal with those who try to come to Australia by boat in an efficient and humane way. Moreover, the only humane way of reducing the number of people who come by boat is by providing a better alternative — to accept more asylum seekers through legal channels so that claims can be processed and they can come here by a safer method.

In short, the Government’s offshore detention policy makes no rational sense and therefore we must look at the political reasons for its existence. It then becomes clear that asylum seekers are simply being used for political gain and are political prisoners of the Australian Government.

Are Australians satisfied with innocent people being imprisoned in their name? Is this what we want in a government? If the Government thought Australians did not want them to put asylum seekers in offshore detention, then they wouldn’t, since their reasons for doing so are purely political. Therefore, we should ask ourselves whether we want to let the Government continue believing that this is what Australians want, effectively sending a message to the world that we are a racist country? Do we want to live in a society that collectively abuses the human rights of asylum seekers?

If you do not want this, it is your responsibility to let politicians know. Otherwise, they will continue to appeal to the racists. And win votes for it.

"We have military forces at the cost of a billion or more a year to stop the boats. In other words, holding these children and their families is not the deterrent." @GillianTriggs says Scott Morrison admitted under oath that offshore detention doesn't save lives at sea. #TheDrum pic.twitter.com/I1xifiRyV1

“@davrosz: Stopping the boats: A graph for lazy journalists https://t.co/MRYqalpDrM @australian @smh @TelegraphNews check it out