Sampson makes documentaries and is currently developing a show about social media’s wide-ranging effects on society.

I was invited to contribute with an interview and to possibly source guests or research for the project, because one of the topics they planned to look at was far-right radicalisation, and I know a lot about that. I was told by the producer I spoke to that they were interested in interviewing reformed ex-fascists about what radicalised them and how they eventually got out.

I know even that kind of coverage can be risky. White supremacists in Australia have used softball media coverage as a reputation-laundering mechanism or get-out-of-gaol card. There are also figures in the "countering violent extremism" (CVE) space who have made a lucrative career out of performing hand-wringing over their former "politics of hate", but actually they’re still neo-Nazis looking for a buck. 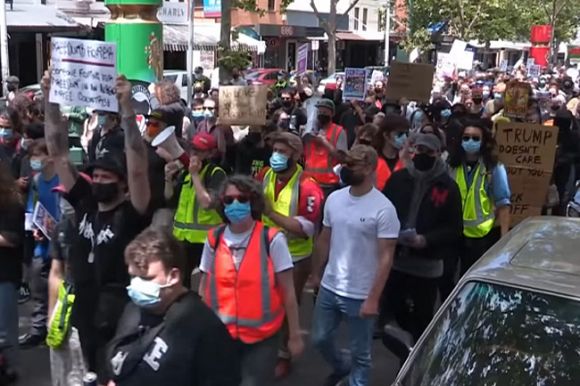 Dr Martin Hirst attended the Stop the Far-Right rally in Melbourne on 20 November, organised to counter the fascism seen in anti-vax rallies.

A lot can go wrong when the media steps into a minefield of far-right liars for content.

That’s why I was happy Sampson's producer had reached out to myself, White Rose Society, the legendary "slackbastard" and other knowledgeable anti-fascists. I couldn’t assess the integrity of their project yet but I thought if they had us on board we could steer them in the right direction.

Then I received a follow-up email from the producer I’d spoken to.

Suddenly the "reformed ex-fascists" criteria had shifted a bit:

“I’d really appreciate your help in finding an extreme right-wing radical who would be willing to be interviewed (even if it’s in disguise). I think it’s important for the audience to understand the level of hatred, bigotry and danger posed.”

Can I clarify whether you're interested in speaking to former white supremacists or current ones?

If it's the latter I need to know. Reformed ones are fine if you can vet their honesty, but current white supremacists shouldn't be incorporated into media projects of any kind, in my view. They are savvy media manipulators and they use this kind of platform to mainstream their own interests or include coded messaging for trolling and political ends.

Researchers or anti-fascists can tell you all you need to know about them without you risking mainstreaming them, in my view. Let me know if you do intend to include them, as I wouldn't participate in a project like that.

They only replied that they "understood". I had planned to bring it up again before our planned phone interview, as that condition is non-negotiable for me.

It turns out that the entire time they’d been discussing this subject matter with me, they’d already filmed an interview with Tom Sewell.

Cottrell and Sewell posted about it at around the same time on their Telegram channels. This is a dance I’ve seen many times before with media tourists in this space, so I took their coordinated posting as a possible threat to Sampson. Maybe they had doubts that it would release in a form they’d appreciate, so they wanted to show him they’d make a spectacle out of it anyway.

Cottrell posted that he only took a photo with Sampson and was never interviewed by him. Sampson only sat down to speak to Sewell. This is actually worse.

What, Sampson’s just out there palling down with Australia’s most known neo-Nazis? Gosh, how intrepid of him.

Tonight we found out on Telegram that @toddsampsonOz is working on the documentary with two of Australia's most hateful and violent neo-Nazis, Blair Cottrell and Tom Sewell. pic.twitter.com/cWZHzxgkq8

Sampson is no Louie Theroux. Theroux himself acknowledged the modern discussion on platforming in a recent Guardian article, as someone with a storied history of interviewing fringe elements including fascists.

He points out that the figures he tackles can wield a great deal of power and influence all their own nowadays, on platforms that exist specifically to protect their rights to peddle hate speech. It makes traditional discussions on what constitutes a "platform" a little outdated. The concept is fluid; it also isn’t inconceivable that this fraught subject matter could be tackled effectively by the right program with the right guests.

These two particular people could never be "the right guests". Sewell runs an active extremist neo-Nazi group called National Socialist Network (NSN). Their accelerationist goals involve concocting stunts, for Australian mainstream media to broadly decry, to bring young men to their Telegram channel for radicalisation. That’s their stated goal and they did that very well last year. They are also alleged to have assaulted lots of people while doing it.

Sewell once tried to recruit Brenton Tarrant to NSN predecessor group, the Lad’s Society. These men are cut from the same cloth. They both believe in the fantasy that the end is nigh for white men and that violent action must be taken to prevent it. Sewell teaches this to the young teenage boys who join his group.

Excellent examples of recent Australian coverage of neo-Nazism do exist, so it's surprising that Sampson doesn’t understand how to do this better.

Nick McKenzie’s brilliant 2021 work, ‘Nazis Next Door’, involved an infiltration of the National Socialist Network. It’s often salacious enough to make Todd Sampson drool, but crucially it came at a heavy cost for the neo-Nazis involved, many of whom lost accommodation and employment in its aftermath.

That’s the kind of work media should undertake with active neo-Nazi groups that still pose a threat to the community.

As soon as I saw the Sewell and Cottrell posts, I messaged the producer:

I imagine you understand we don’t have anything to talk about anymore, given I already told you I wouldn’t be involved in anything including current fascists.

That’s the bare basics of integrity when you’re navigating this dangerous, fraught space. Todd’s obviously interested in doing the polar opposite.

I expect that anyone involved in anti-fascist research – really the only people who can actually tell you the truth about these compulsive liars, because they never will – will now shut their doors to the project. Nobody with integrity would participate in this.

This project is being produced for Channel Ten locally and for the Paramount+ streaming platform internationally. I hope these media outlets will at least reconsider hosting the "salacious far-right tourism" component of Sampson’s project.