The most startling feature of Abbott’s budget reply speech, says Benjamin Thomas Jones, was the incredible emphasis on the Howard years and the economic success of Peter Costello. 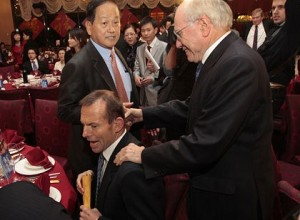 Tony Abbott once joked that he was the political love child of John Howard and Bronwyn Bishop. While Bishop, turning 70 this year, is still watching over Abbott in the House of Representatives, it is clear from yesterday’s budget reply that the Opposition leader misses his Daddy. The most startling feature of Abbott’s speech is the incredible emphasis on the previous Howard government and the economic success of Peter Costello. It is, of course, reasonable to contrast one government with another, but in-between Abbott’s reverential praise of the Howard years and the deafening silence on his own policies and costings, one could be forgiven for thinking Howard and Costello were still running the show at Coalition central.

In 1992, Paul Keating famously ridiculed John Howard for looking back at the Menzies years as a golden age. Abbott has taken a leaf out of father’s book by yesterday declaring that ‘the Howard era … now seems like a lost golden age of prosperity’.  We were reminded of the Howard Government’s ‘consistent surpluses’, that ‘the Howard government achieved growth of 26’ and simply that ‘John Howard’s policies worked’. The funniest moment in the reply was when Abbott compared Wayne Swan’s modest $1.5 billion estimated surplus to that of his predecessor, Peter Costello. Abbott pondered, ‘is it any wonder that he seems to be suffering from surplus envy’. Almost as an afterthought, Abbott placed himself and his team in Howard and Costello’s reflected glory, reminding us that ‘sixteen members of my frontbench were ministers in the government that delivered the four biggest surpluses in Australian history’.

Abbott’s budget reply was certainly a glowing apologia for the former Howard Government, but you have to wonder if he still sees himself as Howard’s loyal attack dog rather than an alternative prime minister. Could you imagine Kevin Rudd in 2007 trying to ride the coattails of Hawke-Keating, or Howard in 1996 summoning the record of Malcolm Fraser? The Coalition’s reputation as good economic managers has been severely tarnished under Abbott’s watch, not least owing to the unprecedented failure to submit costings to Treasury prior to the last election. Again, there were no costings provided for the Coalition’s promises, or any reference to the $70 billion black hole in the alternative budget. Abbott is clearly attempting to capitalise on Labor’s scandals and leadership uncertainty but crucially — he is attempting to sell the previous Coalition Government, not the present Opposition.

Predictably enough, Abbott went to town on Labor, condemning the carbon and mining taxes. He deferred to the standard play of America’s Republican Party by accusing the government of being raging commies, ‘who calculatedly plays the class war card’. The carbon tax was, he insisted, ‘socialism masquerading as environmentalism’. This is pretty standard stuff from Abbott. He has become more disciplined since taking the reins off Malcolm Turnbull and knows how to stay on song.

The reply revealed a real timidity in Abbott. The budget has received generally favourable reviews from economists, but it was not perfect. The single most consistent criticism of Swan and Labor was their stubborn insistence to return the budget to surplus so quickly. If the estimates turn out to be correct, this will represent the fastest budget turnaround since World War II. A surplus, of course, is generally considered a good thing; however, finding over $30 billion in spending cuts in a single year can be a recipe for slowing growth and shrinking the overall economy. Abbott could have been courageous and called for a deficit. He would have had no shortage of economic experts to back him. That would have required a deviation from the simplified message he still clings to — surplus good, deficit bad, Labor waste, Liberals save. Already comfortably ahead in the polls, Abbott was not willing to rock the boat.

Astonishingly, Abbott’s entire reply included just one, singular, new policy. When he was finally though decrying the carbon and mining taxes and the general failures of the ALP and espousing his lengthy hagiography of the Howard years, Abbott revealed a plan to increase foreign languages in schools. Abbott lamented that language study was in ‘precipitous decline’. He was particularly concerned that only 300 non-Chinese students were studying Mandarin. There certainly would have been one non-Chinese Mandarin speaker in the House who would support this measure — although he would support even more heartily a chance to take Abbott on as Labor leader, one suspects.

As things stand, Abbott is on track for a landslide victory next year. Being so far ahead in the polls, there is little impetus for him to bother with more alternative policies or an explanation of costings. Former Liberal leader John Hewson famously claimed Abbott was ‘innumerate’, with no ‘interest’ or ‘feeling’ for economics. Peter Costello, was once asked if he endorsed Abbott, to which he immediately replied: ‘not on economic matters’. With Joe Hockey proving himself eminently likeable but equally uncertain on economic matters, the Coalition are desperate to keep their reputation as the better fiscal managers. The strategy from the budget reply is clear. Abbott will go to the next election selling Howard and Costello, just minus Howard or Costello. 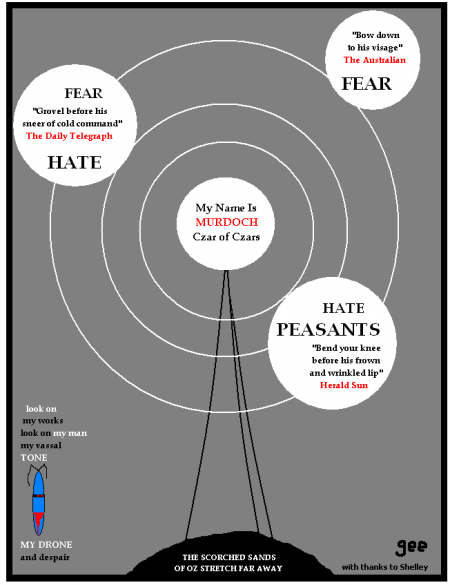