Where the political becomes personal: Inside immigration detention

As a child of apartheid South Africa, another regime that was “sick of being lectured by the UN”, Vanessa Dodd says she knows one day she'll be asked what she did to fight for refugee rights. Here's a insight into one of her regular visits to the MITA detention centre at Broadmeadows, Victoria.

THE OFFICER examines each visitor’s ID and paperwork while we all wait. The forms run out and progress stops while more are copied. People who didn’t book their visit according to the new system are turned away. They walk out slowly with disappointed faces. Officers walk into reception and collect radios at the start of their shift. “Are the cutting down tools here?” one of them asks, as if looking for a stapler. The radio crackles with summons to the visiting room; people are identified by “detainee” and room number.

Eventually, it’s my turn and the officer peers at me over the tall counter.

“Do you know your table number?”

She examines the food I’ve brought, checking for contraband beneath the mangoes, tags me with an orange wristband and gives me a locker key for my bag.

Then, when she’s ready to buzz me through the first set of yellow doors, I can go inside. At the second set of doors I ring a bell, and the officer in the visitors’ room lets me in. There are hugs and smiles, conversations in many languages.

In the time I’ve been visiting, a lot has changed and some things have stayed the same. There are fewer people than there used to be. Some families with young children did get released, as promised. They have dispersed into far-flung suburbs where rents are cheaper and factory work might be found. But they are the lucky ones. They have gone outside.

Those men, women and children, superfluous to Scott Morrison’s amendments to the Migration Act being passed in the Senate, remain and others arrive. I meet women who are here from Nauru, waiting for medical treatment. The wait has been long and the treatment, for injuries suffered before they fled for these shores, severely needed. But they are glad to be in a place where children go to school, where they can take a shower, and where visitors come to see them. 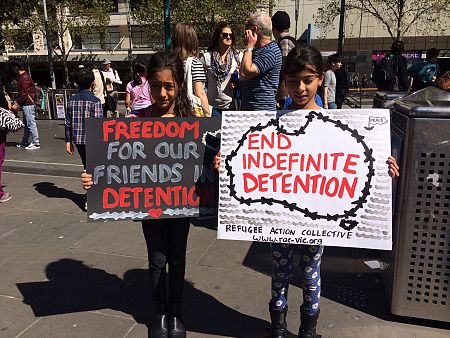 There is a new “enhanced” visits process. Visitors now have to book a two-hour timeslot more than 24 hours in advance, nominate the people they will visit and be assigned a table number. No one in the detention centre can enter the visitors’ room unless they have been nominated. This means the new arrivals from Nauru don’t get many visitors, as no one knows their names. No one hears their stories; perhaps that is the point. Before the process changed, people in detention were free to access the visitors’ room when they wanted to. In this way, friendships were formed that extend beyond the fences. Now, people are worried they will be forgotten.

My friend N, whom I met a year and a half ago, is still inside. He marked five years in detention on Human Rights Day last year. It was not possible to visit that night because another detainee had climbed onto the roof, prompting a lockdown. The man spent almost 24 hours up there in the wind and rain, contemplating a bleak future in indefinite detention versus the alternative, before he came down.

About thirty refugees are indefinitely detained because of negative ASIO assessments. Some have been locked up more than six years. Most of them are Tamils who fled the oppressive Sri Lankan regime. None of them has ever been charged with a crime, yet they don’t know if or when they will be released, and remain unable to challenge the unknown judgements against them.

They don’t know when they will see their families again. N’s friend had to leave his wife and baby behind six years ago. Now he checks his son’s homework by email. No longer able to cook for his family as he loved doing, he keeps himself busy preparing food for visitors, moderating the heat of his traditional curries to Australian tastes.

N tells me he doesn’t like to complain or blame anyone. He likes meeting visitors. It makes him feel like a human being, reminds him there are people who don’t believe he is a bad person. A simple hug gives him so much.

Most days, he sleeps until the afternoon. Visiting time starts at two; the sun comes out then. If his name has been put down, N talks to his visitors until the last ones get sent home at eight o’clock. Then he goes back to his room and the dark clouds descend again. The loneliness, the worry. The processes that have to be followed in order to do anything. The endless negotiation over a few meaningful activities that keep them going — temple and home visits, indoor cricket. The feeling that every officer is watching him, all of the time. 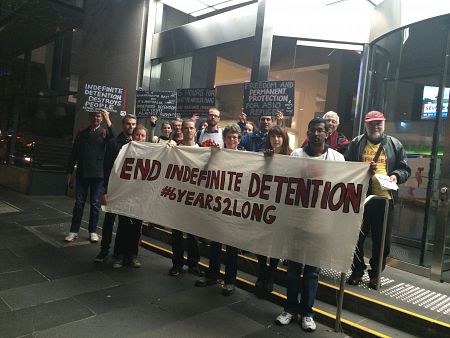 Walking for Freedom: 30 hr protest walk organised by the Refugee Action Committee, 8 May 2015.

I worry about how much worse things will get for my friends inside if Peter Dutton’s “Maintaining the Good Order of Immigration Detention Facilities” amendment to the Migration Act is passed. This Bill would allow minimally-qualified security guards broader use of force, with less oversight, than state and federal police officers. It could lead to a refugee being beaten to death, if a guard “reasonably believed” this to be necessary for some reason.

When eight o’clock strikes, S, whom we used to visit, departs with us now. How we celebrated last September when he received his security clearance. And then we waited. His release wasn’t granted until December, after the new legislation had passed. S was told he would be free to leave on the Monday before Christmas. He packed up the contents of his room; everything was inspected and ready for his new home in the outside world. But when the time to leave came, he was told the forms had not been signed by the minister’s office. So he went back to his empty room and spent his seventh Christmas in a detention centre.

Since he eventually got out, S has returned each week to check up on everyone inside — “they are my brothers”, he says. As he travels to his job unpacking containers, S likes giving money to beggars and buskers. It gives him a good feeling. A new feeling. The part of his mind that is still in detention gets overwhelmed by tall buildings and wide vistas. In his previous life he was a photographer, before his camera was destroyed. He was not allowed a camera while in detention. On his release, a friend lent him one and he seems to come alive as he looks again at the world through its lens instead of a prison fence.

Could a journalist ask Tony Abbott where exactly is the front door for Rohingya refugees? http://t.co/nxZxigDVFG

But his view of the future is bleak and uncertain. He has been told the new migration laws will exclude him from permanent protection, even though he was found to be a refugee six years ago. “I respect the law,” he says, “but the law does not respect me. People are playing with my life.” He can’t go back to Sri Lanka, nor can he call Australia home. He gets “big angry” when he talks about it. “This is a new kind of torture,” he says. They have taken six years of his life, which no one can give back. All he is asking for now is a future.

Back outside, the personal becomes political again. A lot of people are “big angry”. The struggle for refugee rights is going to be a long one, with many protests and phone calls ahead. As a child of apartheid South Africa, another regime that was “sick of being lectured by the UN”, I know that one day I’ll be asked what I did to fight this injustice.

There will be actions around the country today (Friday 22 May), calling on Australia to rescue the Rohingyan refugees and end the practice of turning back boats:

For stories you don't find in mainstream media, subscribe to IA for just $5.

Where the political becomes personal: Inside immigration detention

22 May 2015, 10:30am As a child of apartheid South Africa, another regime that was “sick of being ...
Join the conversation
comments powered by Disqus
News updates