Wedge proofing our fire services: A solution to the CFA dispute

Fire fighter, EBA Truth, suggests the way to wedge-proof our fire services is a return to the geographical and bureaucratic split between urban professional and rural volunteer services.

PLAYING WEDGE politics with an emergency service is reckless in ways that should be obvious to anyone who thinks about the possible consequences. The safety of the community depends on the harmonious cooperation of all components of every emergency service. The Victorian Coalition have shown that creating and inflaming division in the Victorian fire services can pay handsome political dividends, but at what cost?

Newspapers from the first week of 1889 were loaded with recriminations over the events of December 28th, 1888. On that day, long-standing tensions between volunteer and paid firefighters had boiled over into all-in brawls at two fires in succession.

The immediate cause was the refusal of the volunteers to heed calls to minimise water damage, issued by Superintendent Stein of the insurance industry brigades. Melbourne's Mayor reacted the very next day to demand that should Stein have command of all fires and authority over the use of fire hydrants.

The government’s response was slower, because the dispute had been politicised. Metropolitan MPs and the press strongly favoured fully professional brigades for Melbourne, while country MPs had thrown their weight behind the volunteers. Six firefighters would lose their lives at fires over the course of 1889 while debate continued, but finally in 1890 decisive action was taken, establishing two government-controlled fire services: a fully professional brigade for the metropolitan area (the Metropolitan Fire Brigade), and a Country Fire Brigades Board with control of country volunteer brigades.

as a lesson to those grappling

with the present CFA dispute'

The events of 1888-90 ought to serve as a lesson to those grappling with the present CFA dispute. That fiasco shows the dangers of allowing divisions to go unchecked and it shows a possible way of dealing with a divided service: geographical and bureaucratic separation between professionals and volunteers. One might hope that reverting to the extremes of the 1890 clean split was unnecessary in 2017. On the other hand, unlike Victoria, all other states and territories retain this split and none suffer from the spiralling animosity that has developed in Victoria.

Of course, the setting of volunteers against professionals did not emerge spontaneously. It was deliberately provoked by the Coalition as an election strategy. In the CFA dispute, they had found the perfect opportunity to wedge Labor.

For months, Victorian Labor Minister Jane Garrett had dug in against the union’s demands in the proposed Enterprise Bargaining Agreement (EBA). By prioritising managerial prerogative ahead of workplace and community safety, Garrett offered the Coalition no opportunity to wedge. However, on 1 June, in the midst of the federal election campaign, the Fair Work Commission handed down recommendations that largely supported the union position. When Garrett and CFA senior management refused to adopt the recommendations, Premier Andrews intervened, replacing the the CEO and Board of CFA, and the minister, in order to progress the EBA in line with the Fair Work findings.

Suddenly there was a chance for the Coalition to wedge on the issue. In particular, there was an opportunity to exploit public esteem for CFA volunteers as fuel for a gigantic political firestorm. To accomplish that, the Coalition needed to establish a propaganda narrative that portrayed volunteers as somehow disadvantaged by the proposed EBA. 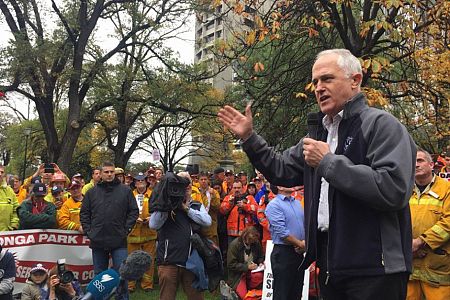 The Coalition, assisted by Volunteer Fire Brigades Victoria (VFBV), and by saturation coverage by the Herald Sun and 3AW, ran a deliberate campaign to incite mass panic. It achieved this through “fear-mongering, misinformation, downright lies”, to use new Minister James Merlino’s accurate description. (Months later, after the election, the emptiness of the Coalition’s rhetoric was exposed at length in a spectacular interview of Michaelia Cash by David Speers.)

Many volunteers accepted the Coalition propaganda uncritically, and rallied together under the Liberals’ “Hands off the CFA” banner (which also served as a fundraising vehicle for Liberal election campaign coffers.) In short order, angry volunteers were appearing daily in the media, lending their legitimacy to the Coalition’s misleading narrative. This continued for weeks and most likely contributed to Labor’s poor election performance in Victoria.

Where did that leave professional and volunteer firefighters?

The CFA is now a deeply divided organisation. Many volunteers are seething with unjustifed angst, and adamantly support the ongoing efforts of the VFBV and the Coalition to deny career firefighters the safety protections afforded by the EBA.

The tensions that previously simmered in certain locales have exploded and have torn asunder the fabric of the integration of volunteers and staff. Professional firefighters and their families have faced harassment and verbal abuse, and at least one death threat has been made. Career firefighters in some areas face intense hostility from volunteers they are expected to work with regularly, and all of us fear the reception we may receive if we are deployed to remote areas for bushfire response.

The toxic division of the 1880s is with us again, as are the dangers caused by that division. The anger the Coalition has incited among volunteers is intense. It will not subside any time soon. Indeed, it seems inevitable that the Coalition will continue to inflame it, having discovered how effectively the incitement of division can serve their political self-interest.

Perhaps the way forward is to wedge-proof our fire services, by returning to a geographical and bureaucratic split between urban professional and rural volunteer services. Place all career firefighters under the auspices of a statewide urban fire and rescue service, and let the volunteers have the CFA to themselves, safe from any imagined threat from paid firefighters.

This is the type of reform Daniel Andrews must find the courage to undertake. Without it, the Coalition will simply continue to inflame dangerous divisions for its own political gain, indefinitely.

Gee, thanks @theheraldsun. You smear and bully us all year, to the point of genuine despair, then make a fake show of appreciation. @tminear pic.twitter.com/EmGTwPIB0l

Senator, would you let volunteers run a hospital?
No, of course not.
Stop trying to grub votes off firefighters https://t.co/ZeZjzHJcgW

Stand up for the underdog. Subscribe to IA for just $5.