It is common knowledge that Melbourne's Herald Sun is a Liberal Party front, but now, after a social media gaffe, it's all out in the open, writes EBA Truth.

EVERYONE KNOWS the Herald Sun is written and authorised by the Liberal Party, but how often do they admit it? Until last week, never, that I can recall. A Facebook slip-up has now changed that.

Discussing the Herald Sun’s publication of a false claim that a new workplace agreement offers firefighters up to 196 days off every year, Victorian shadow emergency services minister Brad Battin referred to the Herald Sun in the first person: 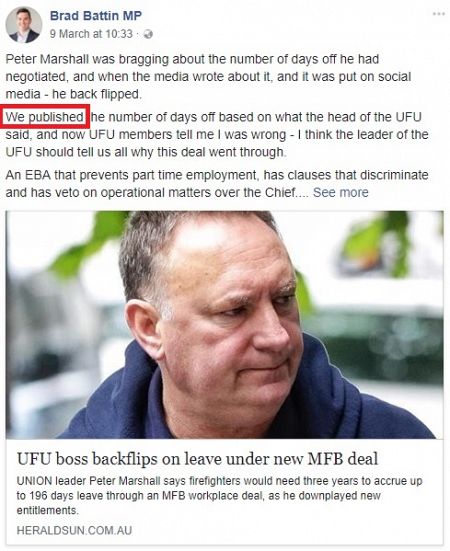 The byline for the March-6th front-page Herald Sun story lists News Corp writers Matt Johnston, James Dowling and James Campbell. No mention of Brad Battin, nor any other Coalition MP. Not in the byline, not in the body nor anywhere else. No attribution of the claim to Brad Battin or any Liberal spokesperson. No sign of any prior publication of a media release or social media statement on the topic by the Liberals. Yet there it is: Battin’s pronouns betray his direct involvement in the story, which is clearly designed to take skin off the Premier’s nose by demonising firefighters with lies and, most assuredly, to set up a bogus narrative for use in the upcoming election campaign.

Oh and by the way, the rest of Battin’s post is rubbish: the United Firefighters Union (UFU) made no comment about the (yet to be ratified) Enterprise Bargaining Agreement until after the Herald Sun published its false claim and dozens of other outlets mindlessly parotted it without doing any fact-checking. The false claim of 196 days off did not come from the UFU. According to lead author Matt Johnston, he came up with the 196 days figure himself. He even outlined his method by Twitter direct message, thereby revealing gross errors that inflated the figure by a total of 94 days:

By disseminating false political propaganda in a form that looks superficially like the journalistic output of a genuine news outlet, the Liberal Party managed to generate an entire "news" narrative that achieved prominence for several days across numerous outlets. You might think, like I did, that for decades no-one has believed that the Herald Sun is a reliable news outlet. Unfortunately, media workers at other outlets don’t share this understanding. The "196 days" claim appeared right across the commercial broadcast media and, perhaps most worryingly, on the ABC. Clearly none of them decided to fact-check it, or even attribute its source: putatatively, the Herald Sun — and, as we’ve since learned, Brad Battin and the Liberal Party.

In fact, almost two weeks after being proven false, the claim still appears in the online story penned by ABC writer Richard Willingham.

Yeah there are a few errors. Hardly slander though.
We disagree on this but writing about what is in and out of a public sector EBA is not an attack on the important work you do.

Despite being held in higher esteem than other outlets, the ABC has clearly abandoned any commitment it once had to journalistic ethics. On the topic of the fire services, Willingham is probably the least ill-informed of any "journalist". Through his interactions on social media, he is fully aware of the mass testimony heard by Victorian Parliament on the creation of serious morale and mental health crisis among firefighters and firefighting families through politically-motivated lie-based media vilification. If even Willingham is willing to serve the Coalition election agenda by telling lies that publically vilify and psychologically assault firefighters, then that’s it for me. In my opinion, the Victorian media have no integrity and appear to me to be fully owned by the Liberal Party.

Massive social media pushback by firefighters – including a Facebook post that went viral, shared over 7000 times – means that, with any luck, the Liberals’ new anti-firefighter narrative will fail to launch at election time. But the way this saga unfolded sheds further light on how the Coalition stole the 2016 Federal election, with the help of a media that was complicit at best and most likely directly conspiratorial.

The "Hands Off the CFA" campaign was central to that election victory, according to Herald Sun editor Damon Johnston.

In comments made to Media Week, Johnston stated that

"Labor and Liberal strategists accept that it cost the Labor Party two to three seats in Victoria."

There is no doubt that saturation Herald Sun coverage – 19 front pages in June 2016 alone – played a key role in that four-seat election victory.

Johnston himself boasted that "our coverage probably swung the overall election result in favour of Malcolm Turnbull" quickly adding that that "wasn’t our intention".

Battin’s slip-up draws Johnston’s assertion of wholesome intent into serious doubt. The way the CFA campaign unfolded strongly supports the possibility that the Herald Sun coverage in 2016 was directly orchestrated by the Victorian Liberal Party, with the collaboration of the volunteer association, Volunteer Fire Brigades Victoria.

Here’s how it unfolded:

April 19: Malcolm Turnbull confirms he will request a double-dissolution election.

April 20: The Herald Sun launches an entirely new narrative of the proposed CFA Enterprise Bargaining Agreement as an attack upon CFA volunteers, including false claims around the deployment of seven professional firefighters and the handing of "veto" powers to the UFU. Neither the volunteer angle nor these specific lies had featured in coverage of the EBA prior to this.

April 23: VFBV organises volunteers to rally at Parliament. CEO Andrew Ford says the EBA would "destroy CFA volunteerism as we know it".

May: CFA coverage bubbles away quietly, away from the front page.

June 3: Herald Sun announces that Michaelia Cash intends to intervene to block the EBA, if re-elected.

"... an extraordinary assault on fundamental Australian values of community service, of volunteerism."

Saturation campaigning and Herald Sun coverage continued until the day of the July 2 election, including repetition of false claims in columns by Matthew Guy, Tony Abbott and Michaelia Cash. 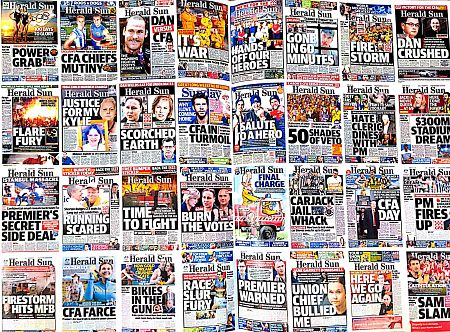 Media reporting at the time framed the Coalition’s intervention as a response to a pre-existing issue that had been bubbling away at grassroots level and in the media for weeks. The public were asked to believe that the Coalition had no involvement with the matter until their good conscience was triggered by the last straw — the prospect of Andrews endorsing the EBA with the blessing of the Fair Work Commission.

This story is highly questionable, given the timing of the April 20 Herald Sun article, with its radical re-framing of the CFA issue. It came out literally the day after the announcement of an election. But who would have put two and two together at the time? After all, surely no-one would make a Federal election campaign out of a State issue? Little did we suspect. We should have.

The parallels between the 2016 media campaign and the "196 days" saga are clear. In both cases, we have the Herald Sun making sensational false claims about a leaked draft EBA, ostensibly off their own initiative. In both cases, we have a headline lie – ‘wait for 7 firefighters’ and ‘196 days off’ – that was immediately refuted but uncritically parotted across the entire media landscape, long after it was disproven. (It would take until August 2016 before any major media outlet would confirm ‘7 fireys’ was a lie.) In both cases we have the electoral fortunes of the Liberal Party being anti-democratically furthered by the fallacious demonisation of professional firefighters.

But what we now have with "196 days" that we didn’t have with the 2016 coverage is this: admission from a Liberal MP that the Liberal Party was directly involved in the Herald Sun reporting that generated the media narrative. What appeared to be a genuine news story was, in fact, false political propaganda generated by the Liberal Party.

After the 2016 election, Herald Sun ‘journalist’ James Campbell – a former Liberal staffer – won an in-house News award in for his

‘... agenda-setting reporting on the ongoing union bid to take over the CFA.'

In 2018, public trust in the media is lower than ever and firefighters are more savvy on social media than they were in 2016. God knows we can’t rely on our pathetic media to call out the further lies the Liberals will tell about firefighters in the lead-up to the election.

They’ll continue to let the Liberals set the agenda through their outlet, the Herald Sun. But perhaps this time the lies will be defeated by the democratising power of social media. We’ll do our best.

The truth about the MFB EBA. The lies behind the media smear campaign. The evidence supporting the graphics I've been tweeting. It's all here👇. #springst #auspol https://t.co/sLHxvLshP2