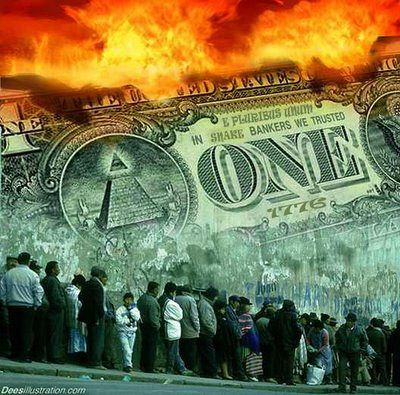 Travis Waldron from Think Progress says Wall Street banks received huge secret payments from the Federal Reserve in the lead up to the GFC that dwarfed the amounts doled out in the TARP bailout.

In the lead-up to the financial crisis that crippled the American economy and plunged the country into a recession, the Federal Reserve made trillions in undisclosed loans to struggling banks and financial institutions, according to official documents obtained by Bloomberg News. Six of the country’s largest banks then turned those loans into more than $13 billion in previously undisclosed profits.

The total cost of the Fed loans amounted to $7.77 trillion, and unlike the funds made available by the Troubled Asset Relief Program (TARP), the loans came with virtually no strings attached for the banks:

The amount of money the central bank parceled out was surprising even to Gary H. Stern, president of the Federal Reserve Bank of Minneapolis from 1985 to 2009, who says he “wasn’t aware of the magnitude.” It dwarfed the Treasury Department’s better-known $700 billion Troubled Asset Relief Program, or TARP. Add up guarantees and lending limits, and the Fed had committed $7.77 trillion as of March 2009 to rescuing the financial system, more than half the value of everything produced in the U.S. that year.

“TARP at least had some strings attached,” says Brad Miller, a North Carolina Democrat on the House Financial Services Committee, referring to the program’s executive-pay ceiling. “With the Fed programs, there was nothing.”

In one month, Morgan Stanley — one of the most vulnerable financial companies at the time — took $107 billion in secret loans, enough to pay off a tenth of the nation’s delinquent mortgages. The loans, like those made to other institutions, were never reported to Morgan Stanley’s shareholders or the taxpayers who subsidized them.

Other banks drew similar loans without disclosing them. Bank of America, for instance, held $86 billion in public debt on the day then-CEO Ken Lewis declared his company “one of the strongest and most stable major banks in the world.” Bank of America’s Fed borrowing peaked at $91.4 billion in February 2009; at the same time, it benefited from $45 billion in TARP loans.

And even while members of Congress were working to overhaul the nation’s financial regulatory system, the banks and the Fed kept them in the dark about the loans. Rep. Barney Frank (D-MA), one of the architects of the Wall Street reform act that eventually became law, and former Sen. Judd Gregg (R-NH), the GOP’s lead negotiator on TARP, told Bloomberg they were unaware of the specifics of such loans.

Had Congress had such information, members of both parties would have changed their votes to favor Wall Street reform, Sen. Sherrod Brown (D-OH) said. Former Sen. Byron Dorgan (D-ND), meanwhile, said knowledge of the loans could have led to a push to reinstate the Glass-Steagall Act, which prohibited banks from owning investment companies and vice versa, thereby limiting their size and vulnerability to such crises.

The secret nature of the loans, however, instead helped Wall Street work to “preserve a broken status quo” that allowed its biggest banks to grow even larger than they were before the crisis. The nation’s largest banks have turned more in profit in the last 30 months than they did in nearly eight years preceding the crisis, all while spending millions to derail significant reform legislation. And since the Dodd-Frank Act became law, they have spent millions more to weaken its rules and prevent certain regulations from taking effect. Bank lobbying, in fact, is now on pace to reach a record high this year.


(This story was published in Truthout on Monday 28 November 2011 and has been republished under a Creative Commons licence.)