One Nation's WA election campaign has all the hallmarks of a cynical moneymaking venture rather than a genuine quest for power, writes Sydney bureau chief Ross Jones.

And the winner of the WA election is ... One Nation!

One Nation’s effort in WA is probably the most cynical political campaign ever mounted in Australia. In fact it has all the hallmarks of a scam.

The victims will be all those who forked over their hard-earned for the right to be a Pauline Hanson One Nation (PHON) candidate as well as ultimately, via the Western Australian Electoral Commission, all WA taxpayers.

The essence of a good con is to convince the mark you are fair-dinkum before fleecing them dry.

Let’s start with the lower house Legislative Assembly candidates, babes in the woods one and all.

They have been roped in and paid out good money on the grounds they might get elected.

In fact, none of them have any chance; PHON will not win one lower house seat.

The party’s on-the-ground campaigning is worse than abysmal, it is non-existent. Candidates are faced with non-arrival of promised campaign material, an absence of any strategy advice, denial of access to social media and a host of other handicaps.

WA election poll shows One Nation vote on the slide https://t.co/ziVv4F1zCS via @theage
I've been told they won't win a single seat.

PHON has, though, bought in an expert to help out the Assembly candidates: Aidan Nagle, son of Paul Nagle from Yeppoon. Paul Nagle was the one to whom Ashby, back in 2012, entrusted a thumb drive detailing the inner workings of his plot against Slipper. The whole truth of Ashbygate is probably still in Nagle senior’s safe. Aidan is about 19 and reportedly close to James. Now he is PHON royalty.

Potential candidate interviews were mostly conducted in early January 2017. Each potential candidate paid a $150 interview fee for their chance at the big time. The lucky winners were summoned to a meeting in Perth on 19 February, when they were verbally informed they would receive a bill from PHON for between $3,000 and $5,000 on top of the expenses listed above.

For, you know, campaign shit.

Additionally, each candidate was required to staff the new South Perth office a day a week:

'Sean Butler ... has confirmed arrangements for a South Perth office. Please organise volunteers from Monday onwards to help out in the office.'

Then, in a piece of total bastardy, PHON threw its Assembly candidates under a bus when it announced, without consultation, it had done a preference deal with the Liberals.

It did not go down well.

On 7 February, one candidate advised others:

You should all think twice about being part of this party all your preferences will just be going to the liberal party the terms and conditions of the contract are ridiculous and smartest ones so far were Paul Young who pulled out, and Dane Sorensen who said she was going to get the contract checked by a lawyer, the endless fees and threats of non- endorsement are a joke no other party does this, don’t you all know when your being ripped off, only a handful of you will get in if that the rest of are just being used.

Hope everyone is well.

Some may not like what I have to say here...

Many people are angry regarding preference deals with Liberals, myself included.

I feel like I have just received a kick in the fangs by our own party.

I did sign up to do what is best for One Nation. But if this is how it is aside from some unsolved issues, (Colin I am still waiting for a call from you and response e-mail since Wed 8th) then why should I be exerting myself and preparing to do hundreds of kilometers to gain votes if the party is selling me and the constituents out so to speak.

'A number of you are getting smashed on the perception that “a vote for One Nation is a vote for Liberal”. I will tailor the information for our lower house candidates.'

► The Big Deal: the Liberal Party in WA does a preference deal with One Nation over the Nationals. #insiders #auspol pic.twitter.com/L7Ve1NtQtZ

Aidan explains the Assembly how to vote cards should read:

Aidan "tailored" the lower house HTV cards because preferences for the upper house, the Legislative Council, were cast in stone.

Seems all was not well with the Assembly HTV cards, however.

I understand you have spoken to my graphic designer about the how to vote cards template.

Can we move forward and sort this today 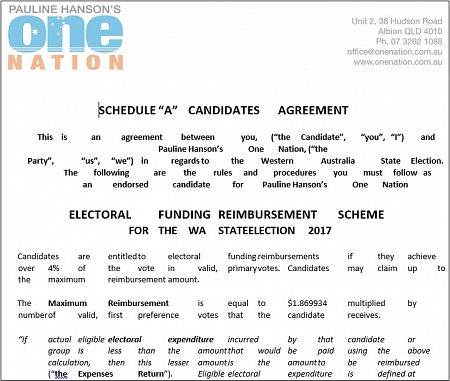 It becoming increasing apparent you are either jointly or singularly attempting to interfere or put undue influence and or emotional pressure, and stress on me with my election campaign, I draw your attention to the fact you have not supplied as promised, corflute, flyers, and or banners as stated in the initial meeting with Senator Hanson.  Now Aiden is refusing to give me how to vote cards or at least a template so I can get them printed.  I have now lost 2 volunteers at early polling due to this.

So, the whole WA lower house campaign has cost PHON not one jot except for Queensland salaries. The entire cost of everything, including Perth office staff, is borne by the candidates.

There are 33 PHON Assembly candidates remaining so, at $3,000 a pop, Queensland head office and its associated businesses will receive a tidy $99,000. That should help pay for the bar fridge.

No doubt the poor sods who signed the agreement were cheered by its first paragraph:

'Candidates are entitled to electoral funding reimbursements if they achieve over 4% of the vote in valid, primary votes. Candidates may claim up to the maximum reimbursement amount.'

Upper House candidates, of which there are 17, won’t fare much better, but because of the preference deal with the Liberals, three do have a chance of getting up: WA PHON party leader Colin Ticknell, Jerramungup farmer Rod Caddies and ex-cop Charles Smith. (It is strongly rumoured that Smith will immediately defect to the Nats is he is elected.)

As for the others, they would be better off standing under the shower ripping up $50 notes.

To achieve its goal of a few upper house seats, PHON is exploiting its candidates financially, physically and morally — some to the point of despair.

When the dust has settled, it may come back to bite them.

Live in the real world. Subscribe to IA for just $5.