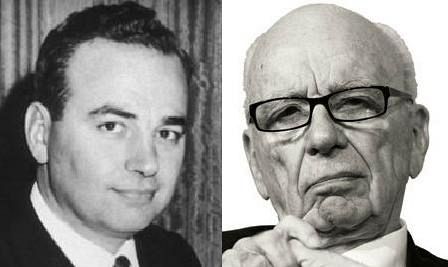 Murdoch's influence hasn't waned over his many years in the media.

American author and historian Eric Zuesse has launched a blistering attack on international newspaper proprietor Rupert Murdoch for using his once highly respected Wall Street Journal as a propaganda sheet to promote the US Republican Party.

Zuesse claims there are rational comparisons between Murdoch and the World War II German dictator Adolf Hitler, saying the two “would have got on famously,” except for a few personal differences:

“Murdoch is more modern and he’s no anti-Semite.”

Both Murdoch and Hitler are accused of over-reaching: Hitler leading to his own ultimate downfall by opening simultaneous wars on three fronts.

Murdoch, he writes, is engaging in similar over-reaching with controversial political activities in Britain, the US and Australia that could bring his own empire crashing down.

Murdoch’s Wall Street Journal is the major promoter of Wall Street and its ruthless banking and investment practices.

“When push came to shove in the financing of the 2012 US Presidential campaign,” Zeusse declares, “Obama certainly wasn’t helped by the very bankers that he had bailed out and refused to prosecute for their heinous crimes that collapsed the global economy.”

Virtually all the top contributors to the Romney campaign were Wall Street firms.

Obama’s campaign received most of its money from employees of universities, technology companies and ordinary citizens and those working people who could afford donations.

Zuesse writes of Murdoch’s attitude to black Americans and to women:

“Not a lot different to Hitler’s.”

He also writes of a secret meeting late last year in the White House seeking campaign support from the very Wall Street bankers he had helped to save.

“My administration is the only thing between you people and the pitchforks.”

On January 27, 2013, Murdoch’s Wall Street Journal ran a headline “Treasury Gets a Citibanker” over an editorial that attacked Obama’s appointment of Jack Lew as his new Treasury Secretary, reporting that he had been a high executive at Citigroup when the company approved the purchase and marketing of worthless mortgage-backed securities.

The US Federal Deposit Insurance Corporation had wanted to put Citigroup into receivership as an alternative to the George W. Bush administration’s bailout using taxpayer’s money.

Zeusse claims the Wall Street Journal blatantly lied: it implied that the paper had opposed the bailout by a Republican administration when it was signed into law by Bush on October 3, 2008.

Records show that the Journal had never opposed or criticised the taxpayer bailout.