Clint Eastwood's conversation with an empty chair at the RNC was the perfect visual summary of the entire 2012 Republican campaign, writes Eric Stetson. 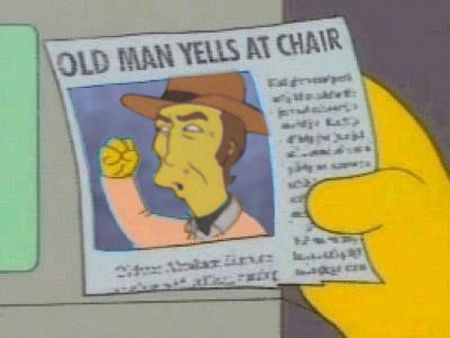 WHEN Clint Eastwood got up on stage at the Republican National Convention and proceeded to have a conversation with an empty chair, it was supposed to represent Barack Obama. Indeed it did — but not in the way the actor-turned-politician intended.

Many pundits and observers have said that Eastwood's antics seemed out of place and difficult to understand. They are missing the obvious. Eastwood's bizarre presentation fit right in with the rest of the convention, since the only Obama that the Republicans are running against is an imaginary one. In fact, it was the perfect visual summary of the spirit of the entire 2012 Republican campaign, the candidates and their supporters — an old white man who spent much of his life pretending to be a cowboy, talking smack to an imaginary president occupying the chair of his feverish imagination.

There are several aspects to the pitch-perfect symbolism of Clint Eastwood's rambling dialogue with a non-existent president he imagines occupies the White House:

1. An elderly white man lecturing someone who cannot respond because he literally is not there.

This represents the way so many of today's Republicans do not even want to engage the real Barack Obama in dialogue about real issues, because they do not respect him enough to give his words, ideas, and actions a chance to penetrate into their minds for objective consideration. To many on the right, Obama is only somebody to be denigrated, and who doesn't deserve the opportunity to respond to their attacks; hence they express such outrage when his campaign releases its own ads defending his record and criticizing the policies of Mitt Romney and Paul Ryan. Men like Clint Eastwood, and the millions of other Republicans who envision themselves as noble cowboys of a bygone era, are loath to see Barack Obama sitting in the real chair of the Oval Office because, in their eyes, a man like him – young, black, from humble origins – doesn't belong there. He only belongs in an empty chair, invisible, unable to speak. His place is to "serve his betters" and be silent, not to lead the country.

2. An elderly white man putting "ghetto words" in Obama's mouth, even though our president is a dignified speaker.

It is not insignificant that Clint Eastwood pretended that the imaginary Barack Obama he was talking to responded to him with vulgarity. On multiple occasions, he pretended that Obama cursed him with the f-word as a response to his political criticisms. The real President Obama would not do this, of course, because he is a gentleman who speaks in a dignified manner. Republicans like Clint Eastwood cannot stand that. The Obama of their imagination is ghetto trash; the kind of person who would cuss and make his points using vulgarity rather than well-reasoned arguments. They literally imagine him as their image of the stereotypical young urban thug, because the reality of a young black liberal gentleman is too difficult for them to comprehend or accept.

3. An elderly white man talking about an Obama who doesn't even exist, by lying about everything he is, stands for, and has done.

The Romney-Ryan campaign and the Republican Party in general have become defined by a series of lies about Barack Obama. Among them are:

Quite literally, the president the Republicans are running against doesn't exist. They are running against an empty chair, and that chair is filled with everything they fear, hate, and disdain, which has emerged from their own obsolete imaginations.

They are running against an imaginary president who simultaneously worships Allah and does a terrorist fist-bump with his wife, attends a too-liberal Christian church, is an atheist, wants to turn all of America gay, studies the works of Karl Marx from his pompous ivory tower and plots to make America a socialist paradise — an America he was never even born in and hates with a passion, even though he wanted to be its president.

Like Clint Eastwood and the cowboy movies of old, they live in a mythological America where white guys with firearms were the heroes and everyone else knew their place. The women retired to their fainting couches, the blacks tilled the fields or served cold beverages to the big men with cigars, the lands of the west were kept clear of "injuns" and Mexicans through the barrel of a Caucasian man's gun and everything was right in the world.

That is the America that today's Republicans are yearning for. And they wish – they wish so badly – that the real Barack Obama – and everyone who knows him for the dignified, decent president he really is – would, in the projected words of Clint Eastwood, "shut up" — dismissing us to the status of a mere empty chair that powerlessly curses their rightful reign.

(This piece was originally published in the Daily Kos.)