ECHOING THE PROTESTS of civil society organizations and social movements around the world, a panel of United Nations experts on Tuesday issued a stark warning about the threats that secret international "trade" agreements such as the Trans-Pacific Partnership (TPP) pose to the most fundamental human rights.

The statement lists the following concerns:

'Our concerns relate to the rights to life, food, water and sanitation, health, housing, education, science and culture, improved labor standards, an independent judiciary, a clean environment and the right not to be subjected to forced resettlement.'

In particular, the officials raise the alarm about the 'investor-state dispute settlement' (ISDS) systems that have become the bedrock of so-called 'free trade deals', included in 3,000 agreements worldwide, according to the count of The New York Times. Popularly known as corporate tribunals, ISDS frameworks constitute a parallel legal system in which corporations can sue state governments for allegedly impeding profits, thereby superseding democratic laws and protections.

The UN experts warn that

'ISDS chapters are anomalous in that they provide protection for investors but not for States or for the population. They allow investors to sue States but not vice-versa.'

Under this framework, states have faced penalties for

'... adopting regulations, for example to protect the environment, food security, access to generic and essential medicines, and reduction of smoking, as required under the WHO Framework Convention on Tobacco Control, or raising the minimum wage [resulting in a] chilling effect.'

Notably, the experts declare that:

'All draft treaty texts should be published so that Parliamentarians and civil society have sufficient time to review them and to weigh the pros and cons in a democratic manner.'

The recommendation comes amid heightened controversy over the administration of President Barack Obama's refusal to publicly disclose basic information about three mammoth pacts currently under negotiation: the TPP, the Transatlantic Trade and Investment Partnership and the Trade in Services Agreement.

Furthermore, the call was issued the same day WikiLeaks took the unusual step of announcing a bounty of $100,000 for the full text of the TPP, declaring

'... the transparency clock has run out.'

Ultimately, the officials conclude, the human rights stakes are too high to keep these deals secret:

'There is a legitimate concern that both bilateral and multilateral investment treaties might aggravate the problem of extreme poverty, jeopardize fair and efficient foreign debt renegotiation, and affect the rights of indigenous peoples, minorities, persons with disabilities, older persons, and other persons leaving in vulnerable situations.'

The full UN statement may be seen below: 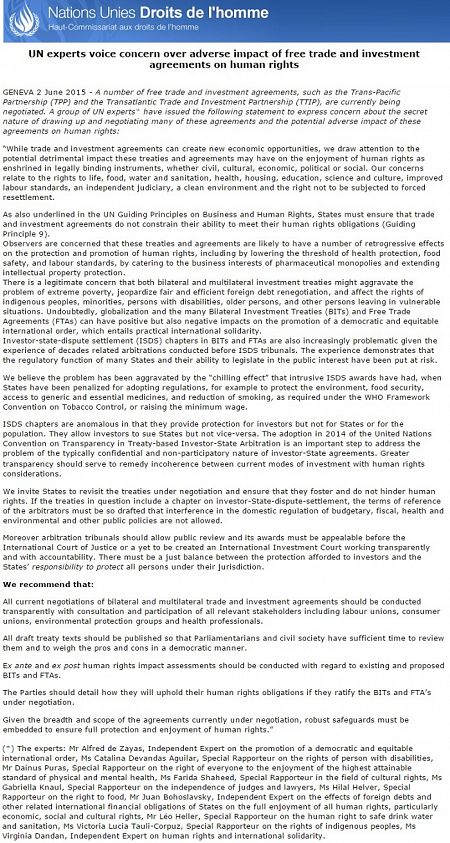 This story was originally published by Common Dreams under the title 'Food, Water, Health, Life: UN Experts Warn of Threats Posed by Secret "Trade" Deals' and has been republished under a Creative Commons licence.