WHAT DO YOU GET when you mix hardworking truck drivers with an American multinational company well versed in union-busting?

Staples is a U.S. office supply giant with a global revenue in 2014 of USD$2.4 billion. Its global CEO Ronald L. Sargent raked in over $12 million in wages and bonuses in the same year.

Truck drivers who deliver Staples packages here in Australia don’t have incomes like that. Far from it, in fact.

In Sydney, Staples contracts its delivery work to trucking owner drivers, "mum and dad" businesses who have invested up to $130,000 to start their businesses — not to mention the day to day costs of maintenance, fuel, registration, tolls and so on.

These are hardworking truck drivers who know how the business world works but they also know what it costs to keep a business running.

The surge in online shopping and home delivery has proved a boon in the parcel and courier industry, but the majority of the financial gains have not trickled down to the workers on the front lines.

For the 46 owner drivers working at Staples in Sydney, the boom in online shopping has actually become a major problem. Paid approximately $2 per home delivery parcel, some drivers are earning just $8 per hour. That doesn’t even cover the fuel, let alone provide a living wage for the drivers to support their families.

Drivers spent months attempting to raise these problems with Staples management at their main warehouse in Erskine Park, all to no avail. So, at the end of April, drivers made a decision to take action to try and get management to listen. 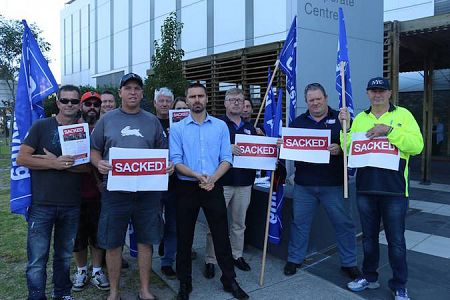 For three days, these drivers held a peaceful protest outside the gates of the Staples warehouse at Erskine Park. The company refused to meet with the drivers over the entire period. Staples, instead, responded by SMS ;— sacking all drivers and telling them to individually reapply to get their jobs back.

These drivers have families to support and businesses to run but Staples managers made a decision to throw them all to the wolves.

The company has clearly imported U.S. union-busting methods, because their next move was to further target the drivers who were active on the Transport Workers Union drivers’ committee.

While economic desperation has forced some drivers to return to the company on even worse contracts, Staples has continued to blackball members of the drivers’ committee.

The company’s decision to terminate the contracts of all 46 drivers has left drivers out of pocket up to $100,000 each. That’s because they have demolished the “goodwill” in the contracts — the amount paid to initially buy a contract that can be resold at a later date.

Staples owner driver Hugh Crowther has been without work for more than four weeks after putting over $130,000 into his business.

“My goodwill is what it cost me to set up this business and it was my nest egg for when I retire — but Staples has ripped this away from me and my family.”

Sacked drivers waiting to speak to @StaplesAust management over their jobs and their goodwill #auspol #ausvotes pic.twitter.com/n1Kbbl7aRB

The TWU has taken a number of legal cases on behalf of the drivers to the NSW Industrial Relations Commission but to date there has been no legal recourse for these drivers.

While this fight is ongoing, drivers took the fight to the company headquarters in Mascot last week. Twenty drivers and other union members converged on Staples head office to demand a meeting to discuss the drivers’ contracts and their goodwill. Drivers were eventually able to sit down with the transport manager, but to date he’s done nothing for these drivers.

All of this raises important questions in the context of the upcoming federal election.

Malcolm Turnbull likes to spruik the fact he has a crew of "Turnbull’s Truckies",but what will he do for these drivers and their families who have been thrown on the scrapheap by a heartless American company? Will he stand up for these owner drivers who are facing financial ruin? Or will he continue to use Liberal National Party members in the transport industry as a convienent prop in an ongoing battle against unions and the ALP?

For Hugh Crowther and the other drivers left on the scrapheap, the U.S. multinational’s attacks have had a devastating impact on their lives.

“We’re all desperate. This is our business and our ability to support our families is on the line.”

The fight goes on for the drivers at Staples and their families. We need a government that will stand up for hard working truck drivers. Seeing that the Turnbull Government recently abolished road safety laws set up to protect truck drivers and save lives, I wouldn’t hold my breath about Malcolm Turnbull standing up for them any time soon.

Richard Olsen is the acting secretary of the Transport Workers Union NSW.

Wow Van! How did you escape being trampled by that *huge* crowd in support of Turnbull's Truckies? #auspol https://t.co/u4q90jXA5U

RSRT established to ensure Truckies were paid a wage that allows them to operate safely@johndory49 #auspol @TWUAus pic.twitter.com/x9jNBboBE6