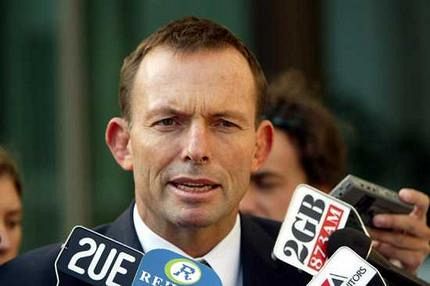 “The truth is so precious, she should always be attended by a bodyguard of lies."

It raises an interesting question: is it desirable for a Prime Minister to always be honest, or is it better to have a national leader pragmatic enough to lie in the national interest?

Whatever your attitude is towards that debate, one thing we do know about Opposition Leader Tony Abbott is that he does not always tell the truth.

Abbott admitted quite plainly that he had a casual approach towards conversational veracity on national television earlier this year on the ABC’s 7.30 Report:

So, Abbott wants to only be held entirely accountable for the statements he makes that are scripted—taken from a read speech or a press release perhaps. In the “heat of battle”, as he calls his unscripted public discourse, Abbott has given himself the debater's dream—a licence to make stuff up.

This attitude was in evidence late last year when, after giving a speech to a hall full of climate skeptics in rural Victoria, Abbott told them that he also did not believe in the science behind climate change:

"The argument is absolute crap. However, the politics of this are tough for us. Eighty per cent of people believe climate change is a real and present danger."

The next day, after the predictable media storm caused by this statement, Abbott adjusted his message, saying that when he said climate change was “absolute crap”, well, this was just “hyperbole” and not his “considered position”.

The effect of all this is that it is now entirely impossible to know what Abbott really does think about climate change. Could it be that he really doesn’t believe in the science, but is saying he does because he has carefully “considered" just what line suits his political purposes? This seems likely, but it is now impossible to be fully sure.

Abbott got himself into hot water again this week while on tour in Birmingham, when he was forced to explain why he had decided to go to the UK rather than accept Prime Minister Julia Gillard’s invitation to accompany her to the Afghan war-zone.

“I thought it was important to do this trip justice, I didn't want to get here entirely in a jetlagged condition,” said Abbott initially, when asked.

This caused another storm of negative publicity, especially from the families of soldiers.

The next day, Abbott claimed to have misrepresented himself:

Abbott almost seems to be saying the problem was that he had caused offence, not that he had made a poor decision. If only he had told a convenient lie, perhaps he wouldn't have caused offence to any soldiers. Telling a lie seems to be okay for Abbott, but poor publicity must be avoided at all costs.

Taking all this together, it might appear that the solution to the problem of finding what Abbott really believes – the ‘real Tony’ – is to simply ignore anything he says off-the-cuff and only believe him if he is reading from notes, has made a written statement, or has made a formal commitment.

Unfortunately, Abbott has shown himself able to get around such written statements or agreements with similar verbal dexterity.

After the election, Abbott was finally forced to provide the Coalition’s costings to Treasury to aid the Independent’s deliberations on who would form Government. Treasury revealed that there was a Coalition budgetary "black-hole" of between $7.5 and $11 billion. Independent MP Bob Katter was furious, and accused Abbott of refusing to reveal the Coalition costings merely to strengthen the odds of a Coalition victory.

After this, it was almost a fait accompli that the Independents would side with Labor and allow them to form Government.

Abbott then broke another formal signed agreement—the one he'd made with the three Independent’s and the Labor Party before the Independents had decided upon which Party to support. The agreement was on Parliamentary reform, and was sealed with not only a written agreement but also a group hug on the Parliament House lawns. It specified 22 areas in which parliamentary practices would be changed to create a “new paradigm” of parliamentary cooperation.

First on the list was for the provision at all times of an Independent speaker who would have his vote paired so he wouldn’t lose it. It was designed to aid the stability of Parliament in the current term.

Days after losing the fight for Government, the Coalition announced they would not be supporting pairing of votes for the Speaker, meaning Independent MP Rob Oakeshott would not be able to become Speaker and that the Labor Party would need to provide an MP to fill this role. The reason the Coalition gave for breaking the barely week-old agreement was that they had just received advice – laughably, from sitting Liberal Party member MP George Brandis QC – that the agreement was “potentially” unconstitutional. Why Brandis had not provided this advice prior to the Coalition signing the agreement was not adequately explained. Brandis’s advice came at the same time as separate advice from the impartial Solicitor-General who said that the agreement was perfectly legitimate.

The conclusion that Abbott forced the Labor Party to provide one of their own as Speaker to reduce the Labor Party majority to a single vote is compelling. Certainly, it is unthinkable that Abbott would have broken the Agreement had the Coalition managed to secure enough votes to form Government. There is no other explanation than that it was a cynical move designed to bolster the chances of the Opposition gaining power. At the same time it provided support for the proposition that Tony Abbott is not only not bound by his word, but will even break signed agreements for cynical reasons of political expediency.

Tony Abbott is the kind of politician that will tell a fib to progress his argument. Similarly, he will blithely break a commitment or renege on an agreement if that will also progress his political cause. It may sometimes be desirable for a Prime Minister to to tell a lie in the national interest, but it is definitely not desirable for an Opposition Leader to varnish the truth to secure voters' support. The bottom-line is that the Australian electorate cannot now be entirely sure where Tony Abbott really stands on any issue. They may like to believe him, they may think they know what he intends, or feel pretty sure, but they can never, really, ever be absolutely certain.

Tony Abbott swears that he will never bring back Work Choices, that he’s telling the truth on this, and on other things, and that he can be trusted, but how do we really know that he’s not just spinning us another line?