The thought that Costello might come back (backroomers are begging him to) puts Abbott’s leadership deficiencies in a spotlight like no other.

Unlike the beaming former treasurer, he seems indecisive. He seems inarticulate. He seems shifty. He seems likely to go back on his word. He jumps like Chicken Little from crisis to crisis, panicking and getting it wrong — often.

“After the crime comes the cover-up."

He doesn’t say that any more.

He is against child abuse, but spoke up for the child abuser, John Nestor. And so on.

‘Havering’ is a good Celtic word that describes what he does — a kind of jumpy, agitated two-bob-each-way, don’t quote me, for Christ’s sake don’t quote me.

He also suffers from what others have called The Las Vegas Syndrome. What happens in Vegas stays in Vegas. 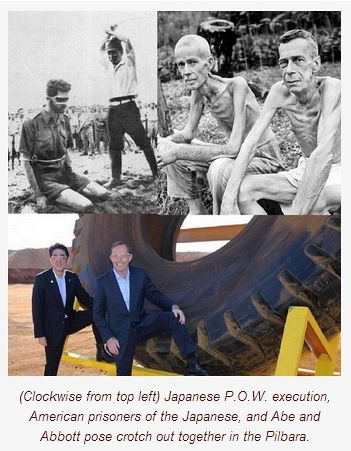 Thus, he tells Japan he admires the ‘skill’ and ‘honour’ of their wartime accomplishments — though many of those accomplishment were slaughters, rapes, enslavements and exemplary beheadings.

And the net result is people don’t believe him. He never delivers in what he’s promised.

Where are the MH 17 bodies? Where is the MH 370 Black Box? Where is the cancelled Schoolkids’ Money? We’re still getting it. Do we pay the seven dollars, or what? What is going on here?

He’s like a 50s crooner who’s turned up without his Big Band. The band is coming, he assures the audience. Meanwhile, I’ll do these bird imitations I’m good at. This is the budgerigar.

We expect more from a prime minister than this.

We’d like to know, for instance, what side we’re on in Syria.

We’d like to know if he’s abolishing, as Pyne threatens, all research in our universities.

The truth is, he doesn’t know these things. He’s not used to having to have policies he’s settled on himself, decided about as leader.

In the past, he did what Howard wanted. And he opposed what Gillard did. The idea of deciding himself, fine tuning himself, what part of the billionairesses’ baby bonus should alter or be cut back or be scrapped is beyond him.

He just looks at the headlines and yells:

“The sky is falling!”

And then havers and dithers about what happens next.

And it’s too late now for him to begin to seem calm and dignified and decisive and commanding — like a leader. Like a prime minister.

He’ll never get there now.

And he’s cactus. He’s a dud. And the people sense it.

He’s last year’s news. And the news has turned sour. And the game is up.

And he’ll join soon the severed heads of Brandis and Andrews and Hockey and Sinodinos and O’Farrell and Baillieu and Buswell, gnawing the basket. 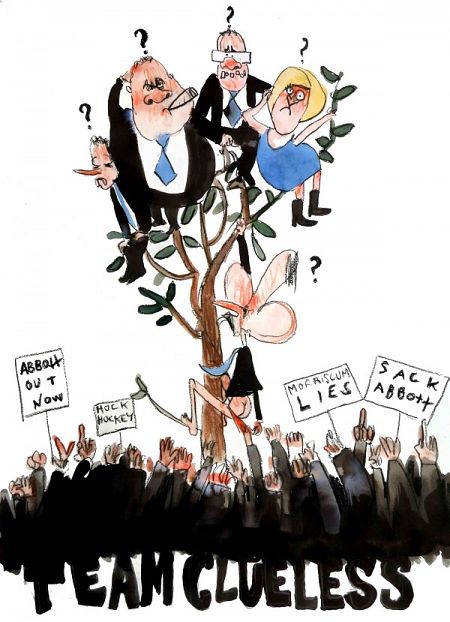