WAR AGAINST AGEING DEFENCE VETERAN PENSIONERS, widows and families, waged in our name, has to stop. Now.

No reloading the ammo. No miserly crumbs scattered in their direction. No entente cordiale.

Take them out of Hockey's Budget crosshairs.

No more political spraying of Agent Orange. No more kicking them in the guts. No waiting for them to die so that we don't have to give them back pay well overdue, let alone give them financial equity and some measure of peace of mind in their dotage; instead of this continuing mindless obfuscating and fiscal greed.

We know where the Tomb of the Known Australian Soldier is to be found. It is within the Seventeenth Parallel of our national conscience; where the other bodies from the Vietnam and other squalid wars are buried.

Then there are the bodies of the walking dead, that remain above ground and in our midst, but well off the radar of successive Australian governments.

It is with utter contempt and despair that Independent Australia reveals that, as we go to press, since November the 26th, Prime Minister Tony Abbott has had on his barnacled desk what is in effect, a begging letter from Colonel David K Jamison, AM (Rtd), representing the diminishing band of brothers and sisters of the Australian Defence Service and Ex-Service Organisations and their widows and families, who for decades have been pleading for financial justice from successive Australian governments.

Now that Parliament is closed for business (even when it was open, it was closed for business) and the shutters pulled down, it is unlikely that Tony Abbott, his brawling Cabinet, or the inept Opposition will spare even a Scroogelike thought for our ageing war veterans during the holidays.

As it is the Australian Parliament has a shamefully low number of sitting days when compared with other countries.

Without question, the nation has indecently pocketed stolen monies from these pensioners and betrayed their wider community.

But we do not have to desecrate their memory to bring restitution to those pensioners who today are barely alive, riddled with ailments and PTSD and who endure the insufferable shame and injury of being human discards and little more than political waste matter of inconvenient wars in their own country.

This is "Team Australia" at its worst.

There is no justification for the persistent persecution and financial isolation of our veterans.

Colonel Jamison, ADSO Executive Director Alf Jaugietis and so many others have for years been in the trenches against successive Australian Governments, and, in latter years, Independent Australia and myself have supported them and campaigned on their behalf — although I am ashamed to say, not as well as we might have. Mea culpa.

Independent Australia has obtained a copy of the letter sent to Prime Minister Abbott. It belongs to Australia and Australians.

It is a cri de coeur.

I again write on behalf of the national leaderships of the Defence Service and Ex-­Service Organisations listed below concerning the recent budget initiative to wind back the method of indexing Veteran and War Widow Pensions (including the Veterans' Disability Pension) to the pre-2007 formula of CPI only and also on the recent ADF pay determination.

Though we understand the need to rein in government expenditure and make the pension system more sustainable we cannot agree with the measures your government has taken to achieve this. We see extensive waste and duplication in Federal and State government activities and administration that do not seem to be subject to determined rectification action while at the same time your government is perceived to be focussed on the more vulnerable sections of the Australian community to achieve the desired budget outcomes.

We are very disappointed with your response of the 14th October and again ask you to personally intervene to inject a sense of fairness towards our veterans, war widows and service personnel as the overriding principle and to reconsider the budget proposals that adversely impact on our veterans and war widows.

We ask also that you instigate a reworking of the Commonwealth’s position on the Workplace Remuneration Arrangement (WRA) to provide an outcome for our service personnel that at least matches the expected increases in living costs over the next three years. Further, we ask you direct that the percentage increases to Defence engendered charges such as married quarter rent, uniform and ration charges etc not be more than the salary percentage increase over the period of the WRA.

On Behalf of the Defence Service and Ex-­‐Service Organisations listed 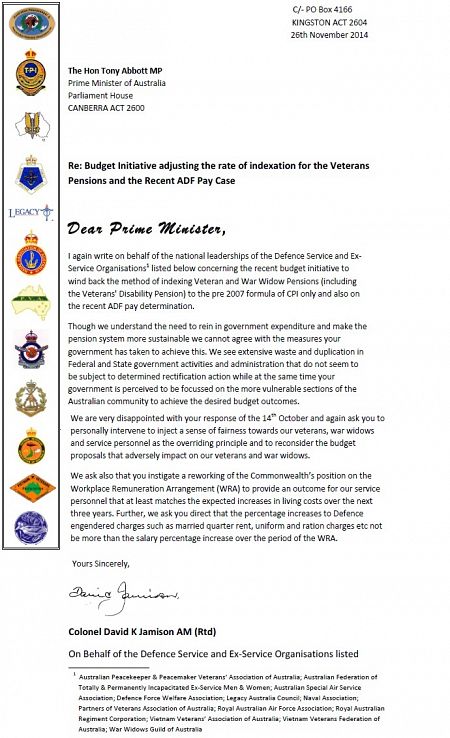 A copy of the letter sent to Tony Abbott (Source: supplied)

On their behalf, Prime Minister, we ask you to do the right thing.

Our current serving personnel deserve your attention. As do those who served you yesterday in yesterday's wars.

Afghanistan and Iraq and other theatres of war are already yesterday's wars. And like so many of yesterday's wars, they remain untruced. But our defence personnel are not yesterday's men and women. They are our brothers and sisters.

Let us catch these veterans in our embrace. We have already forgotten them in the going down of the sun.

Let us remember them in its rising.