Tony Abbott's Christmas turkey: a mandate to do anything

Tony Abbott's Coalition do not have a mandate to implement a stream of weak and unpopular policies made up on the fly, writes Peter Wicks.

If there is a word that has been overused, over hyped and had its meaning stretched almost beyond the point of recognition it is mandate.

Tony Abbott and his motley crew of ministers, who appear to almost universally be failing in their portfolios, are constantly telling us that they have a mandate for this and a mandate for that, as are the News Corp lackeys that treat every word emanating from the Coalition like gospel. In fact, anything that the Opposition disagrees with they claim to have a mandate from the masses on. Although, conveniently, this rule did not seem to apply when the Coalition were in opposition.

The Oxford Dictionary describes a mandate as follows:

1 an official order or commission to do something: a mandate to seek the release of political prisoners

2 the authority to carry out a policy, regarded as given by the electorate to a party or candidate that wins an election: he called an election to seek a mandate for his policies

Looking at the two definitions above, what stands out to me initially is both of them are singular in tense. What I would deduce from this that is a mandate is an authority to carry out a single act.

In regards to a political debate, the mandate after an election would seem to be the single act of forming government. It is clear that the Coalition were given a mandate by the people to do that, however that is where the mandate begins and ends. There is certainly no open license to implement a never ending stream of weak policies made up on the fly.

For the government to claim a clear mandate on any policy or decision they would require a plebiscite or referendum on the matter.

A clear example of this would be the debate raging around marriage equality.

It is clear that the Coalition have a prehistoric view of same-sex marriage based on fear, bigotry, hatred and endorsed by religious extremism. The Coalition also seem to be using bully tactics to override any move at state level to allow equality and common sense to prevail.

As I write this, we have troops risking their lives in Afghanistan to fight against religion becoming too entwined with state. Religion had its time to rule the world – the Dark Ages – but that time has passed.

As those living in the real world would realise, the public is overwhelmingly in favour of allowing same-sex couples to marry and live their lives together how they see fit. In the UK, even a conservative government passed legislation to allow same-sex marriage, complete with the blessing of the queen.

This is just one example that demonstrates how the Abbott government does not have a mandate on any of their specific policies.

In fact, if we look at some of the areas Abbott and his band of merry ministerial men and token woman claim a mandate, it becomes abundantly clear that no such mandate has been given — not even close.

For example, consider the debt ceiling debate. What sort of mental incompetent runs an entire election campaign and term in opposition on the need to reduce debt drastically, yet then claims a mandate to increase debt by a couple of hundred billion dollars?

Only on Planet Abbott could this make sense.

As for his mandate on his environmental policies, this is also unclear at best.

It is clear that Abbott's campaign against the “Carbon Tax” worked a treat. After all it was backed up by the Murdoch press, the shock-jocks, and every climate change denialist, moon landing and holocaust denying idiot with a few letters after their name. As a result of his misleading campaign, the majority want to see the “tax axed”, even though the carbon pricing is working and emissions in the economy are falling, especially in the electricity industry.

Then Opposition Leader Tony Abbott stands in front of a sign that reads ‘Ditch the witch’ at an anti-carbon tax rally in Canberra last year. (Image by Andrew Meares via afr.com.au)

It seems like the slogans win over the solutions every time.

However, recent polling shows that despite wanting to see the carbon tax removed, the majority of the country don’t want to see Abbott’s alternative policy implemented either. In fact according to polling, the unpopular Carbon Tax is preferred over the ludicrous “Direct Action” policy, which seeks to implement the direct action of rewarding polluters with cash handouts in the remote hope they will change their polluting ways.

Many argue that there was a clear mandate on stopping the boats, and it is true there certainly was a major push from the then opposition during the entire period of the Rudd and Gillard governments on this issue. There were scare campaigns waged, slogans for bogans pumped out, bumper stickers made and “Stop the Boats” was branded on every brain in the country.

I’m sure this period in history will be looked on with shame in years to come.

The government have used this supposed mandate to do all sorts of things, with one of the costs arguably being our relationship with Indonesia, as our new asylum seeker policies were causing conflict between our nations before the spy saga.

On top of the attempted media censorship by Minister Morrison we have seen the sacking of asylum seeker health advisors, deteriorating conditions in facilities such a Manus Island, Nauru and Xmas Island, mothers separated from children, more deaths at sea and so on and so on... 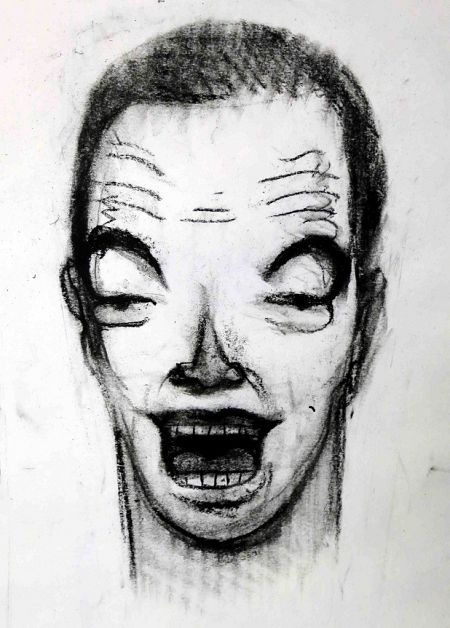 Yet the boats continue coming and, if there is one thing that has clearly changed since the Coalition took over, it is that we no longer have the co-operation of the Indonesians.

The Coalitions backflip on the promise to the electorate on the GONSKI education reforms certainly was one of the many things that has blown up in Tony Abbott's face as well as shown the country Christopher Pyne is far from worthy of his current position on the front bench.

In fact, Abbott's eventual bowing down to the public after a massive backlash at this broken promise should be seen as proof that even Abbott doesn’t believe he has a mandate to do whatever he likes.

Then there are the 50,000 workers who work in the automotive industry, both in the manufacture of vehicles and parts. I’m sure these good people weren’t looking to give Abbott a mandate to destroy their livelihoods, particularly when you look at one of the Coalition's strategies during the election campaign.

Some of you may remember the “Who’s Next” campaign by the Coalition during the election campaign which focused on the car industry.

Closing a loophole in the fringe benefits tax that allowed companies to use vehicles as an untaxed salary inclusion affected a handful of voters around the country, however the Coalition seized this as an opportunity to put the boot in to the Rudd government.

Below is a picture of campaign advertising by the Liberal Party on this issue being towed around by imported motor-scooters. The ones in this picture have been abandoned in a no standing area and are blocking in a parked car:

In an open letter to the car industry, employees and companies – amongst other things – Tony Abbott stated [IA emphasis]:

The Coalition understands the importance of business and consumer confidence and wants confidence to return Australia’s car sector.

Australians should know the Coalition supports their efforts and wants them to succeed.

You have our support now and into he future.

The full letter can be viewed here: 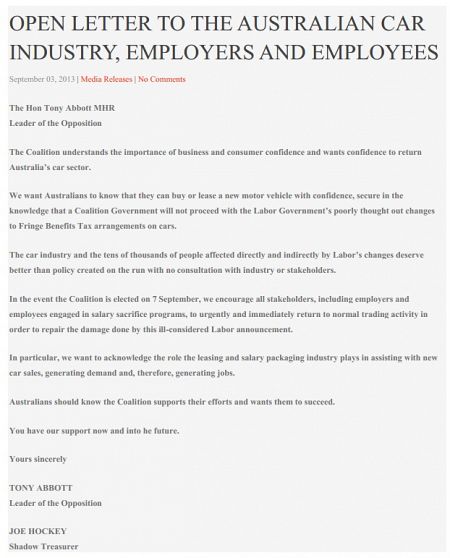 The letter is written by Abbott, co-signed by Hockey and has more than likely been checked by a team of Liberal Party staffers, yet it went on a Liberal party website with all of these people missing the misspelling of the word 'the'.

I know it may seem trivial and a bit like the pot calling the kettle black – as I am prone to the occasional typo myself – however, I self-edit and don’t have a cast of thousands triple checking my work. Besides, I couldn’t resist.

Anyway, that understanding Tony Abbott talked about in his letter certainly disappeared very quickly, as did the support. As those living anywhere but under a rock would realise, after approximately three months of a Coalition government the decision has been made, Holden is closing down in Australia in a move that will most likely see Toyota go shortly after.

This will see the parts industry also collapse. The parts industry is a part of the already struggling manufacturing sector and employs approximately 50,000, with up to 200,000 jobs at risk in support services, whose families now face uncertainty this Xmas.

It is ironic that all those bogans with the Southern Cross stars and “Fuck Off We’re Full” stickers on the back of their Holden utes for whom Tony Abbott’s asylum seeker policy and future changes to the Racial Discrimination Act seemed tailor-made will no longer be able to buy a new Holden in a few years thanks to the guy they were tricked into voting for. 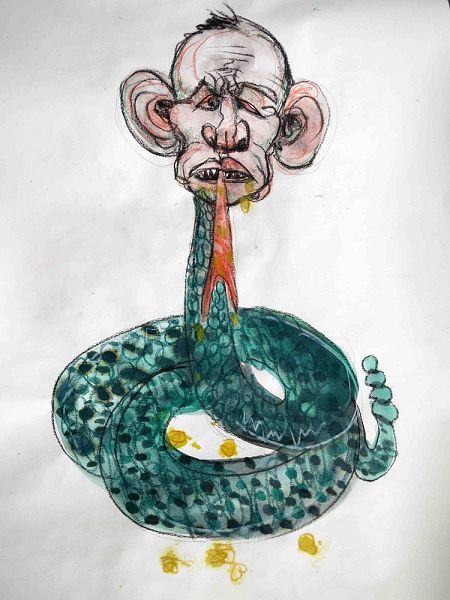 The Coalition has not supported the car industry in Australia as Abbott said he would, instead they have killed it with their lack of support.

So, when it comes to supporting our car industry, Tony Abbott has broken yet another gospel promise. This one in a carefully prepared statement and in writing.

What Australians were promised was a government of no surprises and no excuses.

What we have received is broken promises and denial.

We were told Australia was now “open for business”, yet we are in a diplomatic disaster with Indonesia, China and East Timor. Not only that, but unemployment is on the rise and perhaps one of Australia’s greatest icons has announced it will soon be “closed for business”.

Winning an election and forming government does not mean that the Coalition have a mandate to make things up as they go along.

The current opinion polls are the proof of that.

Can I get off now?

You can follow Peter Wicks on Twitter @madwixxy. The originals of John Graham's art, as featured at the top of this piece and elsewhere on IA, may be purchased for very reasonable prices by contacting the editor via email at editor@independentaustralia.net.