If Tony Abbott is elected on September 7, Australia will drift back to the strange backward place he and his group inhabit, says Judy Crozier.

Society is made up of many bits and pieces – communities, demographics, small towns, big cities – that develop at different paces. Some move rapidly; some very slowly.

Tony Abbott would be a case in point. He has moved slowly, and drifted somewhat to, well, another place.

There are plenty of indicators of this, of course. One of the latest is the reference to a female candidate as having "sex appeal". Some may find that a minor issue, but it did seem to be something that slipped from his mouth a little too easily.

It joined that pile of revelatory gaffes that includes the reference to women doing the ironing and the housework, and the ones about abortion being the easy way out, or the casual reference to the generic school principal as "he".

It joined that all-time classic Abbottism:

"If we’re honest, most of us would accept that a bad boss is a little bit like a bad father or a bad husband. Not withstanding all his or her faults, you find that he tends to do more good than harm. He might be a bad boss but at least he’s employing someone while he is, in fact, a boss."

Many of us took from that, Tony doesn’t spend a lot of time fretting over bullying, bashing, domestic murder, or avoidable industrial accidents.

It’s as if he can’t be bothered. Or it’s as if he has missed the past four decades entirely. Though, presumably he wasn’t alone in this. Presumably he is in sync with an entire demographic that has not seen the need to pull back the curtain and only reluctantly ever answers the door.

He really does think, when confronted with the issue of the recognition of the rights of gays, that it’s a matter of fashion.

There’s a certain laziness here. It represents the approach that says that some things aren’t worth noticing, learning, respecting. They’re just not important. He is comfortable where he is and really can’t be bothered to take on new information, or understand new dynamics.

He and his group are at one remove from most of us.

While it seems to me that his Paid Parental Leave scheme is so outrageously unaffordable that it is doubtful it will ever actually see the light of day, its very existence begs for some analysis.

It sprang from between Mr Abbott’s ears (rather suddenly) primarily to distract us all from Labor’s more modest version, which has, apparently entirely unnoticed, now supported several hundred thousand parents with new babies. Well, that worked. Everyone’s talking only about Abbott’s version.

But the PPL also indicates a mindset that is well worth looking at. Firstly, of course, there is no tradition among Abbott and his Very Dries of broad-based, holistic social policy. His PPL indicates no interest in supports such as better childcare or more accessible education for either adults or children, equal access to health and so on. That’s not the point.

What is the point, then? Well that may be found in a comment on the PPL left by an approving voter on the Liberal Party Facebook page, where an Abbott admirer writes:

'It’s not about a handout it’s about supporting the women who do have jobs and have been paying taxes. Encouraging hard working women to actually take 6 months to have a baby [sic!] rather than encouraging the low socioeconomic welfare groups to reproduce.'

‘This policy actually puts some thought in to balancing out our future generations so my children don’t grow up outnumbered 10-1 by welfare babies.’ 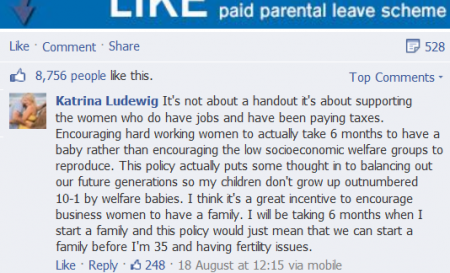 So, not about redressing any balance, then. Or at least, not as might usually think of it.

And the attitude that appears to loom behind the Libs’ PPL, lurks elsewhere as well.

While Abbott clearly doesn’t recognise value unless comes with a price tag, he also has no interest in understanding how the rest of the world functions in 2013, or, indeed, where it is headed.

No doubt much of the obfuscation over budgets is just that, and exists because the Libs must simply seem to be different from Labor, and Labor must simply be made to look brash and profligate. But there is every indication that behind all that is also a belief in those old-fashioned values of patrician control, of top-downness, of everyone in their place.

To them, it’s not a class war. It’s just how things are.

And, for Tony Abbott at least, to exist in this comfortable place where imbalance is balance, where inequity is just how things should be, also includes choosing what it is you care to notice.

Remember, this is the guy who has not yet moved on from yards and inches.

Thus, Tony Abbott may genuinely think that the technological revolution is about downloading video games.

He has never taken technological change seriously enough to know either where it does or what it is capable of.

His attitude arises from a profound lack of interest in the multi-faceted society he wants to lead; it’s an attitude that has led to our current parlous lack of depth (or truth) in public discussion about public policy.

Should the Coalition be elected on September 7, Australians will wake in a very strange place — that place where Tony drifted to and stuck.