We now have a new series of legislations limiting freedoms, but very little discussion about their context or their necessity, writes Judy Crozier.

BEFORE THE DOWNFALL of the Iron Curtain, there were clandestine meetings at which philosophy was taught by Western academics to European Eastern Bloc students hungry for, well… thought. For questions and analysis and meaning. For expansion and exercise of what we humans believe we do best.

Some companies in Europe now actively look for a background in the humanities in their new recruits ‒ philosophy or something with links to philosophy ‒ since this is about considering ideas; evaluating these and the context in which they appear. Making inferences, drawing lines. Recognising subjectivity. Recognising, in the end, the importance of the freedom of thought and, from that, the freedom of discussion. Recognising that thinking outside the box takes some training in recognizing the box.

In Melbourne lately, there has grown up from the work of LaTrobe University Anthropology students a growing network of free discussions led by academics and other thinkers and experts in their field. On any topic, really. This is the Melbourne Free University, recently expanded to include special sessions for refugees. Many of whom could be forgiven for thinking that thought is not something that occurs much here in Australia.

You’d think so, certainly, reading or watching our mainstream media. You’d think so, looking at what passes for public discourse on politics or social issues or economic issues. Or planning.

Three words at a time are not enough, you know.

I have a proposal arising from this musing on our apparent incapacity to recognise the importance of ideas. It is that the media ‒ as much of it that is in a position to do so, given the ownership constraints governing most of it in this country ‒ ask some questions, research some history, examine some definitions. Come up with a confrontation or two; encourage some fact-based argument.

We have right now, for instance, is a new series of legislations limiting freedoms. But where is the discussion about context?

It’s a thing governments do in times of war — this legislating to limit freedoms and increase secrecy. And so, are we to consider ourselves at war? What kind of war is it, and with whom?

You may consider the answer to this to be obvious, but it is something that needs some discussion — after all, once upon a time the ‘enemy’ was declared, the war was declared. There was some clarity, something I am not sure we could claim now. Is the person in the street able to answer the question: who is the enemy?

What we have now, in the Middle East, is a mess that is (arguably) our own making. This isn’t necessarily to argue against a war, or war-making, but it most certainly begs quite a few questions about directions, methodology and causes — not to mention social issues closer to home.

In the meantime, if you are going to limit transparency and take away freedoms, reasons need to be given of a much more forceful and undeniable kind than have so far been forthcoming.

Further, when the Luftwaffe and the Rising Sun made war a rather cut-and-dried thing and restrictions to freedom of movement or speech were brought in by Allied governments, existing social freedoms were, in fact, a good deal more limited than they are now. Or were.

It was not until a few decades ago that the press claimed as its aim fearless and independent reportage. Suddenly, the complacency of the 1950s that accompanied the heavy hand of apparently benevolent control gave way to a new steeliness. The idea was that the media was out for the truth.

The idea was that the media had become an indispensible wing of democracy.

But the role of the media and the press is now, few people could deny, not so cut-and-dried. Not now that so many outlets are but portfolios in international capitalism.

Personally, I can see quite a few philosophical topics arising here — ones of fundamental importance to our lives as citizens of what we think of as a free and fair society.

When WWII brought repressive legislation in support of the war effort, was it a good thing altogether, or did it have other ramifications? One could consider the rise of the secret services and their arguably contradictory role in what we call a democracy. One could, conversely, say their rise was necessary and inevitable, though perhaps at this point you could argue that it was the desire by isolated and conservative obsessives to direct and control led directly to Macarthyism and its equivalents here and abroad.

So, what is the effect of the current crop of legislation, in a world where we had thought the establishment of personal and civic freedoms had moved on even since those days, when we considered we were in a heroic battle against fascism?

Arguably, in any case, there has been over the past few years a creeping change in what we consider to be normal. Some of which may have been due to the last batch or batches of legislative winching-back of freedoms; after all, now we hold people incommunicado for several days without turning a hair, if someone somewhere thinks terrorism may be involved. This is in spite of the well publicised case of poor Dr Haneef, we all recall.

Or do we, really?

Many of our freedoms have been depleted by simple capitalist deregulation. Thirty years ago we would have been appalled at the invasion of our homes by salespeople on the doorstep and on our phones. We don’t shriek with rage now; we may grumble; we probably shrug.

All around us, I posit, is evidence of the diminution of our personal freedoms. Many of them we don’t notice, or we noticed at first until they became another part of warp and weft of life. Until we forgot what used to be normal.

Where will these latest legislations leave us? Will we forget how things used to be? Or will sunset clauses mean we can return in ten years to something we might recognize now?

Is this legislation necessary? If yes, to what extent? Why? What will be their effect on life, thought, the media?

Are we still too embarrassed by the memory of Howard’s contempt of the “chattering classes” to claim our right to think and talk?

Isn’t it time to accept thought, context, the past and the future back into our daily discourse? 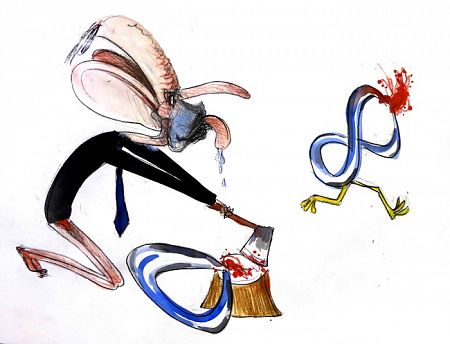