Tony Abbott has a problem with women, says Peter Wicks, but the way to fix it is not to to get other women to condescendingly attack some of these same women. 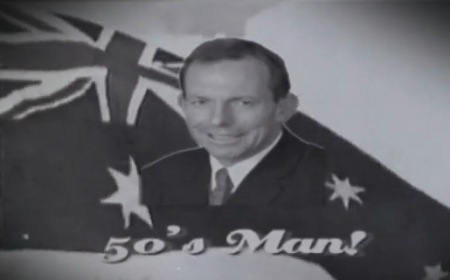 AS MY NAME would suggest, I am not a female.

Whilst I’m not a female, I still know condescending language when I hear it. I also recognise it when it comes under the disguise of a woman’s voice.

The Liberals latest tactic of referring to any woman from the Labor camp as being part of a“handbag hitsquad” is a new low point in trying to repair Tony Abbott’s female image problem. Just because it is coming out of the mouths of Kelly O’Dwyer and Julie Bishop does not make it any less condescending either — indeed it may make it more so. After all, have they been told what to say by the men in their party?

This so-called "handbag hitsquad” is made up of Nicola Roxon, Tanya Plibersek, Julia Gillard, and Anna Burke so far, all of whom are women I’ve never seen carrying a handbag.

The inference is that any woman who can out debate, outsmart, or show Tony Abbott in poor light, is not smarter, or more capable, but is in fact using her sex as a means of putting him down by beating him up with an imaginary handbag.

Not only is this sexist in the extreme, condescending, and downright offensive, but it is also pretty stupid, even for Abbott.

You see, everything has a flipside. In a debate, or argument, there are always two sides to the coin.

If four women beating up Tony Abbott with handbags is the image that Liberals want us to picture when Abbott debates these women, then what are we supposed to picture when Julia Gillard debates Tony Abbott, Joe Hockey, Christopher Pyne, Greg Hunt or any of the other male members of the Liberal Party? A bunch of blokes beating up a female leader?

I would have thought this would be an image Tony Abbott would like to avoid after the all controversy of the past couple of weeks. In fact, I would go so far as to say that the Liberal Party would be wise to avoid putting the words “women” and “beating” in the same sentence until after next election, or a new party leader is in place.

It is no wonder that the polls are turning around. In a week where Tony Abbott’s attitude towards women, and where his dodging of questions relating to his throwing punches into a wall either side of a female counterparts head, have only been overshadowed by his Parliamentary Secretary, CoryBernardi’s bestiality fantasies, I would have thought imagery of Tony Abbott in any sort of violent clash with women would best be avoided by him.

Maybe this “handbag hitsquad” image is supposed to portray Abbott as someone who has to always defend himself from violent attack from women. Is this possibly being used as a way to soften the impact of his wall thumping intimidation episode? If it is, it is rather offensive.

The Liberal strategists are clearly in a tail spin. The carbon price has turned out to be a non-event. Tony Abbott was caught out lying again on television, twice in two days, over the Olympic Dam project closure, and the misleading spin he tried to put on it. Then there was the wall thumping student politician from hell incident.

If, rather than debating policy, or discussing ways to take this country forward, they choose to put handbags in the spotlight, they have nobody but themselves to blame for their woes. I don’t claim to be a rocket scientist, or some sort of Einstein, but I do know this much — with Malcolm Turnbull as the Liberal leader we wouldn’t be talking about all this.