Tony Abbott — the gift that keeps on giving

Just like with last night's Budget, Tony Abbott has given Bill Shorten gift after political gift since the election — so why is he seemingly unable to capitalise on them, asks Michael Galvin.

I HOPE BILL SHORTEN woke up happy this week.

Tony Abbott has given him a Budget that should make it a piece of cake for him (Shorten) to make this government a one-term case study in political ineptitude and certain defeat.

Bill, all your Christmases have come at once.

Even a drover's dog should be able to show, over and over again, how the poor and the vulnerable − the ordinary people − are the biggest losers in this Budget. Abbott is brazenly using the relatively good state that Rudd and Gillard left the nation's books in — not to cut spending, so much, as to shift spending, away from the "undeserving poor" (I am sure this is the world-view of most of the government) and towards other purposes, like building roads and such.

Why is this good news for Shorten?

Because in my opinion Abbott's budget is much less likely to plunge Australia into the "recession we had to have" than it might have been, given their small government obsessions. This means that Shorten can go to the next election promising to restore a fair go for the losers from this Budget and highly likely to have an economy functioning well enough to make those promises credible and affordable.

Why, then, am I not confident that Shorten will do better than a drover's dog and lead Labor back to victory at the next election?

Well, dozens of comments on this website allude to Shorten's strange inability to say anything that cuts through, even though Abbott has given him political gift after gift since the election. Why he cannot rise to the occasion is almost as interesting as why Abbott cannot stop himself showing his pathological tendencies.

The morning after the Budget was no different.

I watched Shorten being interviewed on Sky TV. Now, several hours after the interview, I cannot tell you what the main points were that he was making. I know he made several points in quick succession, but they were lost on me.

I don't think he had yet made up his own mind how to attack the Budget, or what form of words to use. Was it to attack the broken promises, or to attack the substance of the decision? Who knows? If it's both at the same time, and in the same sentence, it's confusing and incoherent.

I think he even said something along the lines of:

"We'll still be supporting some of decisions the government has made, even though we disagree with them."

Amazing. Maybe I heard him wrong.

Anyone looking for a succinct, memorable couple of phrases to encapsulate Labor's response would have been sorely disappointed.

I predict the following: neither Abbott nor Shorten will be leading their parties into the next election.

Abbott, because his unpopularity and general weirdness, will be costing the Libs too much in the polls; and Shorten, because he showed himself completely unable to unwrap the gifts that Abbott kept giving him. 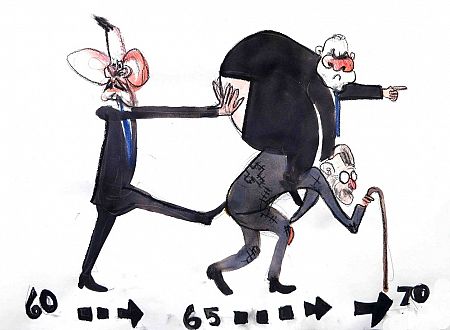