Time for Tony to take up something useful

All conservative governments need secrecy to survive and this one’s cover is getting blown wide open on a daily basis. Bob Ellis says Tony Abbott should read the tea leaves and do the sensible thing.

ALL TORY GOVERNMENTS work on secrecy and it is hard to see how this one can long survive when its cover, daily, is being blown.

It is unusual for a government to be so derisible so soon.

Thatcher’s was, and Howard’s was, yet both persisted for over a decade. MacMahon’s was, and was gone in eighteen months.

This morning, though, a new low was reached by this dread bunch of chittering Neanderthals. By refusing an apology (like Obama’s) for the bugging of an opposite number, Abbott made sure that no boat that comes here will be accepted back by Indonesia. He made sure, too, that many more boats will set out and many more children drown.

It is time the Senate appointed Bob Carr as their negotiating representative in this region and asked him to sort something out, on their behalf. It is time the Opposition dealt with Indonesia separately. Abbott and Bishop’s new Cold War is disastrous and must be mitigated by separate action lest a hot one, after border incidents, begins.

It is time too ‒ time already ‒ that Abbott considered his position and, after taking thought, gave way to someone with tact — like Turnbull, or Palmer, or Truss. Or apologise, abashedly, for his hairy, chest-beating global incompetence.

And he should get the hell out of national politics, as he is no good at it, and take up something useful, like surf lifesaving.

Bob Ellis will be giving an address at the IA Christmas function at the NSW Parliament on November 29. For more details and tickets, click here. 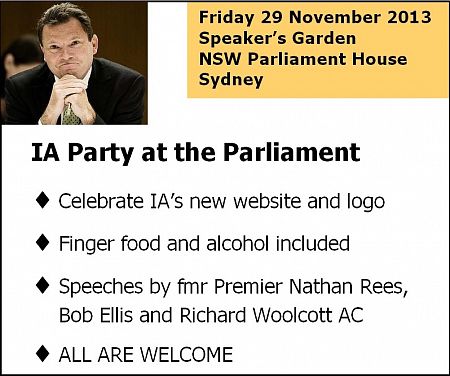