Time for Abbott to stop fudging on the citizenship issue

The fudging, blocking and delaying from both conservative governments, in Australia and Britain, suggest the date when Tony Abbott renounced his British citizenship will be politically harmful to the Prime Minister. Law lecturer Ingrid Matthews looks at the facts.

IN THE U.S., being born in that country is a Constitutional requirement for standing for the Presidency. Anyone born outside the U.S. is not eligible to stand. There was once some talk of changing this so that Arnold Schwarzenegger aka the former "governator" of California, would become eligible to run for president. A sex scandal broke, he disappeared from public life, and so did the debate.

This is a constitutional matter. A legal fact. The political and cultural requirements are numerous and complex. For instance, there is no requirement in the constitution that a presidential candidate also be a Christian. But the current political reality is that candidates are compelled to state their adherence to the Christian religion and end their speeches with ‘God Bless America’. This is so despite the fact that the framers of the American Constitution were determined secularists. Freedom of religion and freedom from religion is the secular liberal tradition.

The private letters of U.S. Constitution framer Thomas Jefferson clearly show his secular outlook and contain the phrase ‘separation of church and state’ to explain the First Amendment, which opens with this line:

‘Congress shall make no law respecting an establishment of religion, or prohibiting the free exercise thereof’

Atheists are usually required to demonstrate our knowledge of your religion in order to refute it.

In this tradition, Jefferson supported his argument by quoting the gospel of Mark (12:17):

‘Then Jesus said to them, "Give back to Caesar what is Caesar's and to God what is God's." And they were amazed at him.’

Because Barak Hussein Obama is a black Democrat with a funny sounding Muslim-ish name, a group of right wing conspiracists made up a story: that Obama was not born in the U.S.

This is simply a lie.

It gained traction in all the usual ways: via the lie-spreading machine that is Fox ‘News’, funded by millionaire Donald Trump, who donates generously to the Republican Party and increases his already obscene wealth under the demonstrably terrible ‘economic policy’ measures favoured by the extreme right wing. 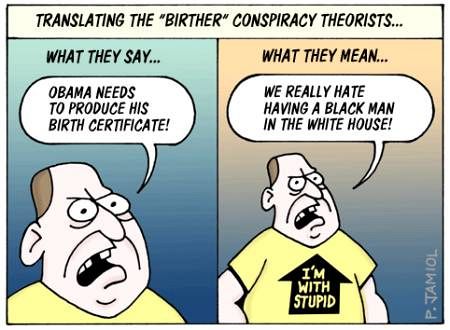 The whole shrieking mess can be translated into a simple invalid argument: Obama is black, therefore he is not eligible for the presidency.

The situation in Australia is different. Not for the first time, we have a foreign-born Prime Minister. This is neither a legal nor political problem. The constitution does not even mention the prime minister, let alone direct that the person holding that office be born in Australia.

Section 44 of the Australian Constitution lists the grounds for disqualification on who may become a candidate for election to the Parliament of Australia. It states in particular:

(ii.) Is attainted of treason, or has been convicted and is under sentence, or subject to be sentenced, for any offence punishable under the law of the Commonwealth or of a State by imprisonment for one year or longer: or

(iii.) Is an undischarged bankrupt or insolvent: or

(iv.) Holds any office of profit under the Crown, or any pension payable during the pleasure of the Crown out of any of the revenues of the Commonwealth: or

(v.) Has any direct or indirect pecuniary interest in any agreement with the Public Service of the Commonwealth otherwise than as a member and in common with the other members of an incorporated company consisting of more than twenty-five persons:

shall be incapable of being chosen or of sitting as a senator or a member of the House of Representatives.

Here’s the thinking behind the provision on foreign powers. While the states run day-to-day internal matters such as health, education and policing, the Commonwealth must deal with external affairs on behalf of all Australians.

So, if a member of the Commonwealth Parliament holds dual citizenship, they immediately risk a conflict of interest where the Australian Government is negotiating, or going to war against, a foreign power. This is an unacceptable level of risk, because of national security.

So to stand for public office as a dual citizen is in breach of our founding legal document, the law that authorises all other Australian laws. Again, this is not necessarily a problem.

If the Constitutional breach is seen as inadvertent – a mere oversight – we extend the principle of charity. This is the same rule that gives the batsman the benefit of the doubt. People make mistakes all the time. Where there are humans, there is human error. In the first instance, we give them the benefit of the doubt. They said it was an oversight, and it probably was. It’s a small problem with a simple solution.

Renounce the other citizenship, become an Australian-only citizen, if necessary hold a by-election. If you win the by-election after renouncing the non-Australian citizenship – the citizenship of a foreign power – both the legal and political problems are resolved. That’s it.

@TonyAbbottMHR if you've renounced your citizenship to the UK why block FOI about it? Is there something to hide? pic.twitter.com/qKbAnHcB9j

It is a different case altogether to repeatedly stand for public office not once, but twice, or three or four or five times, while not being eligible to stand under s44 of the Australian Constitution. It is certainly a substantially different matter if the person who did this is the Prime Minister, a person who holds qualification from an elite university, a highly paid member of parliament who knows or ought to know that what they are doing is in breach of the Constitution.

Someone in this position is attributed with constructive knowledge, that is, if you say you didn’t know, the law says you ought to have known, in this case on the basis of the responsibilities and remuneration of your office, and the foundational principles of the Westminster system, such as ministerial accountability.

There is no crazy conspiracy ‘birther’ movement in Australia. There is a group of people on social (and now some traditional) media asking whether the Prime Minister has stood for public office while ineligible to stand and, if so, how many times.

Comparisons with the birthers should be dismissed out of hand as weak analogy. That is, there are too few similarities, and those similarities are very broad (both arguments are founded in political oppositionism and use the Constitution to make their case). There are too many highly relevant differences and the differences are very specific.

We at least have a right to know the truth. FACTS: http://t.co/U1zruOMy1c PETITION: http://t.co/Q99JsVWSeX pic.twitter.com/BFOE7lkOMg

The birthers simple seek to discredit the president and their opposition is racist as well as political. In Australia, we are asking whether the Prime Ministers tendency to lie goes all the way to his election to public office itself.

The question is easily answered. The Prime Minister’s office tells us he has renounced his British citizenship. It refuses to say when. The fudging and blocking and delaying from both conservative governments, in Australia and Britain, suggest the date will be politically harmful to the Prime Minister.

My guess is that the date he renounced British citizenship is relatively recent and will show that he wilfully, not inadvertently, stood for public office more than once while being ineligible to do so.