When the Australian Financial Review surprisingly declared the ‘World is Fukt’ last weekend, were they revealing much more than they intended? Lyn Bender considers.

It could be the most accidentally and heroically honest front page ever to go to print in Australia.

The special Anzac day edition had this pulled from its papers, except for the Western Australian edition.

The time difference may have meant it went early. The editor has apologised and explained that unfortunately the Western Australian financial review got the unexpurgated — that is, the intended to be dummy version.

But he didn’t actually retract its words.

He didn’t say the world is, of course, not fukt.

'The Australian Financial Review editor-in-chief, Michael Stutchbury, has apologized to Western Australian readers of the national paper for a set of front-page headlines which read in part: “World is Fukt”.'

Someone in Sydney ‘pressed the wrong button’ ? Really?

Nevertheless, we have had a glimpse into the subtext of a prestigious mainstream newspaper.

Despite all the glossing over, do they know and believe:

Were these three items, intentionally linked? Do they tell their own story? Is the whole world “fukt” — or just our world?

Is the world, or just Australia, fukt?

There are at least three reasons for saying it might be.

Under the cover of a probably boozy long weekend, where we were all urged to remember the glory days of combat, three big unveilings occurred.

In no order of significance these were:

Number one: The environment is fukt!

Greg Hunt, the Minister for the environment, released his white paper outlining his much-derided Direct Action plan for emissions reduction.

In short, it is to pay selected polluters not to pollute ‒ pretty please ‒ and to impose no penalties, to reach the meagre target of five per cent emissions reduction by 2020.

The Climate Change Authority has, by the way, deemed this target to be inadequate.

But no worries, they are on the Libs' abolition hit list.

It just gets more wacko at every turn. Warburton is currently under investigation for allegations of foreign bribery. This is known to the Prime Minister.

The plan to remove the carbon tax and replace it with Direct Action has been criticised by the UN Climate Chief Christiana Figueres as a lot more expensive and less effective than a price on carbon.

On top of that, eminent professor Ross Garnaut has bagged Direct Action as being

It is a white elephant that will not achieve the necessary emissions reduction as it stands. It is costly both for the environment and the economy and is described here in IA by Jeff Schiller.

Direct Action has even been denounced by Clive Palmer, who has called it dead, hopeless and a waste of money — although it must be remembered that Palmer is a mining magnate, who has withheld his carbon tax.

Indeed, Palmer has threatened to take a case to the high court, on the grounds that the mining tax is unconstitutional. Palmer, who has now reinvented himself as an MP, has had various positions on abolition of the mining and carbon tax. His position consistently trends towards abolition — surprise, surprise.

The glaring conflict of interest is his giant interest in fossil fuels and the Galilee Mine – a $6.4 billion dollar potential white elephant recently approved by Greg Hunt.

Despite his voiced concern for the orphans of veterans, Palmer and his Palmer United Party are hinting at threatening to block the repeal of the mining and carbon tax in the Senate.

Of course, Palmer is merely shadow boxing with his old foe, Tony Abbott to get what he wants. His stated scientifically ignorant belief is that only three per cent of emissions are caused by humans and 97 per cent is caused by nature.

So why act on human emissions? Get nature instead.

Makes sense — if you are a big polluter.

Number two: The strange case of the planes

Two days earlier, in time for the celebration of Gallipoli, Prime Minister Tony Abbott announced the biggest expenditure in the history of Australia’s defence spending — the purchase of 58 F-35 Joint Striker jets by the year 2023.

Even more remarkably, it has bipartisan support — despite the cost and criticisms. Indeed, even Liberal Dennis Jensen has labelled it a dud decision.

Nevertheless it provided a great opportunity for Tony Abbott to be photographed in the cockpit of a replica warplane, giving a cheesy thumbs up.

Acting Greens Leader Adam Bandt declared that in a time of professed budget emergency, the F-35 Joint Strike Fighters were a $14 billion leap of faith:

“Tony Abbott’s priority should be pensions not poorly performing planes.”

All of which segues nicely into…

The budget emergency, the belt tightening, the heavy lifting, the debt crisis — these are all scary things the Australian people are repeatedly told are looming.

But is it just a big sham, faked by Tony Abbott and Joe Hockey, as Bandt contends?

Of course, Joe Hockey refused to ‘speculate’ on the big budget announcement. Except that this mess is inherited from Labour.

Listen to Hockey try to tiptoe around Australia’s undeniably robust economic position in the following interview, with the astounding claim Australian should not be benchmarking itself against the “laggards” of the G20 — the 20 richest nations in the world:

Intimations have been circulating to arouse fear in the plebeian masses.

Health, Medicare pensions and disability benefits have been declared to be on the table - or the chopping block. Deep cuts have been forecast, decried or hailed as necessary.

The smoke and mirrors in the heavy lifting budget metaphor have been analysed in IA by Mark Chapman here.

Some experts warn that a crudely implemented austerity policy – which is what Joe Hockey is aiming for with his “end of entitlements” schtick ‒ is actually bad for the economy.

Bad for all — but especially for the poor.

In an article for the New York Review of Books describing how the theoretical economic basis for austerity crumbled, Nobel prize-winning economist Paul Krugman detailed a discredited theory based on faulty calculations.

He explained, as John Maynard Keynes had argued:

“The boom, not the slump, is the right time for austerity.’

And that cuts should wait until economies were strong. The logic behind this is obvious to all. Deprive an ailing economy of sustenance and what else can occur but death or disability.

Paul Krugman describes advocates of austerity as ‘petulant and delusional’, issuing ‘cockroach’ policies or ideas that have been flushed away by Europe’s poor results.

We only need to look at the stalled British economy to understand the foolishness of austerity in constrained economic times.

Krugman sees austerity as contracting the economy — not curing its debt.

It acts like the cure of bloodletting. The patient gets worse, so you bleed them more. They keep getting worse and if the bleeding continues they expire. Voila, recession and depression.

But the final lunacy indicating that we are fukt, rests on the reality that with unchecked human induced climate change, we really are in deep crap. As I discussed in IA here, we do indeed have a stupid government of climate deniers. As Professor Ross Garnaut declared, climate change will disrupt our entire way of life in Australia, socially and economically. No habitable planet equals no economy.

The World Bank has warned us — the longer the world waits to address climate change, the greater the cost. This is cost in every way, including the economy.

The cost of inaction is greater than the cost of action.

Without a stable environment, the economy and we – in the words of the Financial Review – are, indeed, Fukt. 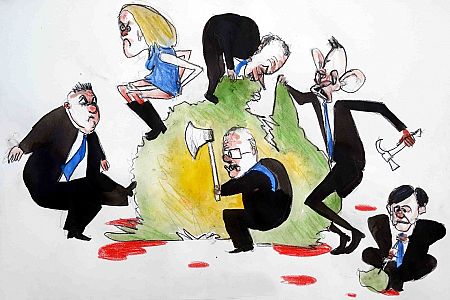