The world in 2020: Some countries greater than others

With the second decade of the 21st Century just ended, is the world getting better or worse? Alan Austin reviews the year and the decade.

THERE WAS PLENTY to be dismayed about in 2019, but plenty to celebrate also. Let’s start with the positives. 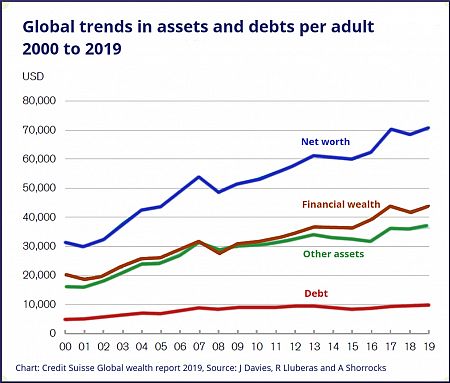 There is more than enough food to feed the world. Local famines are the result of distribution issues, not supply.

Smoking shows curious trajectories. In some rich countries, smoking rates have now halved. But as cigarette advertising has been curbed there, the tobacco companies have targeted poor countries. In Lesotho, for example, smokers are up from 17.6% in 2000 to 26.7% today. Worldwide, the decline is from 27.7% to 20.5%.

Availability of electricity, clean water, sanitation, garbage disposal and medical care continues to increase worldwide. Access to electricity in the least developed countries has increased from 19.3% in 2000 to 51% today. Good, but still a way to go.

Generally, the world has become safer over the last decade. Several states and countries have followed Australia’s 1996 lead with more restrictive gun laws. These include New Zealand, Norway, California and Illinois. Both Brazil and Italy loosened gun restrictions this year, so we shall see if fatalities there rise or fall.

Conflicts still rage in Kashmir, Myanmar, the Palestinian states, North-East India, Colombia, Afghanistan, Syria and Somalia. But the long-term trend is towards fewer armed conflicts. The graph below shows fatalities in each post-war decade. As the world’s population has increased greatly over that time, deaths relative to population have declined more steeply than this chart shows. 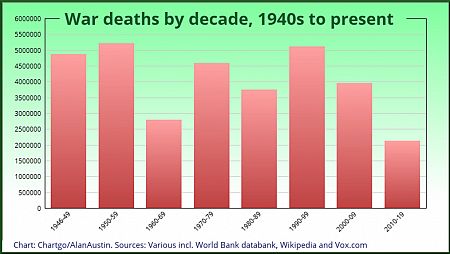 The number of people who believe a husband is justified in beating his wife for various causes is declining worldwide, but only slowly.

In Albania, women who believe physical punishment is appropriate when a wife goes out without telling her husband is down from 19% in 2009 to 3.7% today. Good. But in Burkina Faso, this is only down from 53% in 2003 to 33% today. Not so good.

Finland’s MPs formed a new coalition government in December comprising five political parties, all led by women. Strikingly, four of them are under 35, including Prime Minister Sanna Marin, 34.

Other advances in the last year and the last decade include in employment rates, wages, productivity, electronic communication, access to education, housing, global travel and tourism, space exploration and science broadly.

Concerns remain in other areas, including:

Fortunately, none of these is without hope. It is not inevitable that these are in a downward spiral. Some are cyclical. Others seem to be worsening because some in the media want citizens in a state of anxiety.

Birth rates are declining in most countries but not all. The sooner poor countries in Africa and elsewhere are assisted to achieve stable and prosperous economies, the sooner the threat of overpopulation will recede.

The USA has provided an extraordinary case study in how a once-democratic system can be subverted by corrupt political interests. The fact that the current President has just been impeached is a hopeful sign.

Mass protests against oppressive governments with the support of large swathes of the population have been mounted recently in Hong Kong, Chile, Lebanon and France.

Australia, Britain and the U.S. remain the three developed nations where the majority of the voters seem profoundly ignorant of many political and economic realities. This is primarily due to fake news disseminated by the mainstream media, led by News Corp. This need not continue indefinitely.

The use of renewable energy continues to expand worldwide, again unevenly. Most governments have indicated a commitment to global action. Greta Thunberg is Time magazine’s person of the year.

In all these areas more must be done. But optimism is justified. Happy new year. And happy new decade.

Greta Thunberg is an ordinary teenage girl who, in summoning the courage to speak truth to power, became the icon of a generation #TIMEPOY https://t.co/6X9Bit3V6F