The Uglies faction and our anti-Commo history

Australia's post-WWII migration record has been characterised by the persecution of Communists and the promotion of fascists, says John Ward. 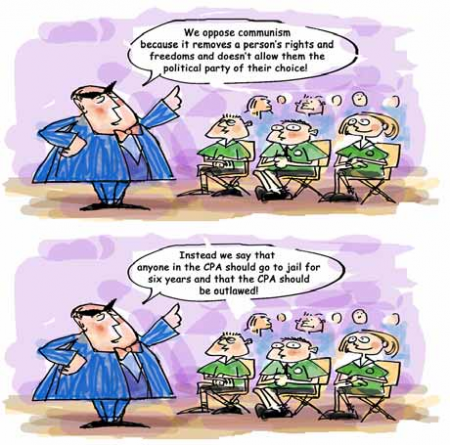 BORN IN 1935, I was a pre-war kid who did not know his dad, because he had enlisted in the second AIF by September 1939.

One day, he came home from the war ‘Shell Shocked’, a drunk and violent bastard.

As a result I have spent most of my life suffering PTSD. My mother fled to Victoria from Sydney because she feared I would kill my own father. At 13, I had become proficient in defending my mother and sisters by knocking him unconscious by hitting him with beer bottles and half house bricks to the back of his head, while he bashed or strangled my mother thinking she was a Nazi in the Afrika Corps.

So my interest in how he got that way, led me to join the Army, so as to learn more about his war and what it was to be a 'Digger’.

By then wave after wave of ‘Dagoes’, Balts, New Australians and displaced persons of all kinds – among them Germans – fled to this country from an utterly destroyed Europe.

Through those years I found that Menzies was able to send us to war simply because we were British first and Australian second. That he sent us to Korea, to a ‘secret war’ in Indonesian Sarawak (10,000 troops including SAS) in 1964, and begged the Vietnamese Government to ask us for our help in a vain effort to ensure the US would remain our great and powerful friend.

All of this occurred without once consulting the Australian people.

When the UN, led by Bert Evatt and aided by Jessie Street, moved to make the declaration of human rights the wonderful commitment it is, I wept with pride at being an Ozzie.

But, as time proved in our history, it was all downhill from there because, while Menzies sought to re-create a conservative political force in this country after the United Australia Party self-destructed, the Labor government was knowingly admitting Nazi war criminals combatants and collaborators as refugees.

After 1945, the Chifley government found itself in an environment where the US provoked the Cold War against Soviet Union.

De-Nazification was stopped in Germany and fascists continued to dominate the police and military in Italy, Chile, Argentina and South Africa.

Chifley locked Australia into the western security web – and in doing so surrendered our national sovereignty to the new intelligence order in Washington – as well as creating ASIO, ASIS, DIO and DSD to enforce the interests of the ANZUS alliance over those of Australian citizens.

When Menzies was elected in 1949, his government set about implementing the Communist Party Dissolution Bill, the sort of law that made Singapore, Malaysia, Argentina, Chile and till 1994, South Africa, police states.

Before the bill was thrown out by the High Court, plans were eagerly drawn up for concentration camps and the internment of those they called “listed persons” – 16,600 unionists and their families – without trial on the grounds that they were “communist agitators”. Australia narrowly escaped becoming another South Africa when Menzies referendum to overturn the court decision was narrowly defeated.

Into this 1950′s mess poured the Nazis, protected and used by ASIO to control and monitor the growing migrant groups. Together with the Croatian Ustasha, Hungarian Arrow Cross, Romanian Iron Guard, the SS controlled Slovenian militia. Groups derived from former members of these were organised with the tacit support of the Menzies and successive Liberal governments. With the deposed regimes of occupied Europe now represented in the Liberal Party, pro-Nazis held significant power over pre-selection of Liberal Parliamentary candidates.

Lyenko Urbanchich came to Australia after WWII he then found a comfortable place in the bosom of the Liberal Party, ever happy to embrace, as “good anti-communists”, from the collapse of the fascist Axis. In the 1970s, Urbanchich headed the “Liberal Ethnic Council”. His faction known as the Uglies, control up to 30 per cent of the Liberal Party State Council votes and are the power base of Tony Abbot, Bronwyn Bishop, Philip Ruddock, Nick Minchin, John Howard and others.

Perhaps the Nazi history in our conservative parties explains the present 9,000 Volt and razor wire fences around our concentration camps, (sorry, detention centres) and the racial purity tensions in our immigration department and policies.

Going back in time, prior to WWII, the UAP attempted to deny Egon Kisch entry to Australia. Kisch was a prominent Jewish communist anti-war activist, whose books had been banned and burned in Germany because he was a vocal critic of Adolf Hitler’s regime. Kisch wanted to visit Australia in 1934, but Menzies pointed out that:

“…every civilized country had the right to determine who should or should not be allowed in…”;

“since Kisch was a revolutionary and that revolution involved violence, he was not to be permitted entry”.

Nothing much has changed since then.

Today, the AFP is finding a traffic in blank visa documents to overseas ‘people smugglers’ who can get false asylum seekers into Australia for a price, with a very small the chance of being detected because this country, like the US, has no way of technically identifying whether you have not left the country other than through reports from citizens with an axe to grind.

The UNHCR set up a system to process asylum seekers in Indonesia, which is bound to fail because there are simply not enough protection officers (maybe 10 to 20) to cope with the demands placed upon them, a total of 30 people, including clerical assistants, are responsible for asylum seekers in Indonesia, Brunei Darussalam, the Philippines, Malaya, Singapore and East Timor.

Australia is one of only ten of the 185 member states of the United Nations (UN) who have established annual resettlement quotas above and beyond their acceptance of persons arriving spontaneously at their borders. Australia has a quota of 12,000 per year, over and above those who arrive at our borders.

We made a commitment in 1951 and again in 1967; however, after Howard repudiated that promise, we live with the dishonour of our word and of our forebears. Forebears who, by the way, thought they had just fought a war against Hitler to make the world a better place.

Turnbull resorts to poppycock on renewables at Big Mining's bidding

17 February 2017, 6:30am The poppycock campaign against renewable energy by coal and oil interests using the ...

Unlawful reallocation of clean energy investment by the Coalition

The Uglies faction and our anti-Commo history

28 January 2012, 4:39pm Australia's post-WWII migration record has been characterised by the persecution of ...
Join the conversation
comments powered by Disqus
News updates