The Turnbull Government: Those that would destroy the ABC 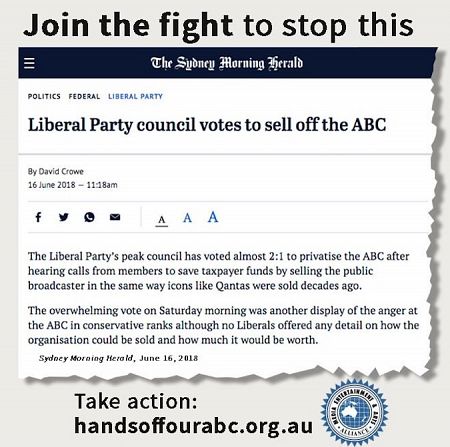 The 110 members of the annual Federal Council of the Liberal Party have voted overwhelmingly to sell off the ABC.

Who would have guessed it?

By a ratio of two to one, MPs and other delegates supported privatisation, except for services provided at a loss to rural areas.

The arguments for the sell-off were laughable.

According to Mitchell Collier, the federal vice-president of the Young Liberals who moved the motion:

“Privatising it would save the federal budget $1 billion a year, could pay off debt and would enhance, not diminish, the Australian media landscape.”

Save $1 billion? He shows no sense whatsoever of the loss of services the ABC provides that would result from its sell-off to Murdoch or other media magnate. He cares nothing for the jobs, the workers or the people who rely on the ABC for their news, information and entertainment.

Stopping the tax avoidance industry would "save" the revenue $20 to $30 billion a year but I don’t see the "free" marketeers championing that. Couple that with a small net wealth tax on multimillionaires and billionaires and we could wipe out the budget deficit overnight.

No one, not even Minister for Communications Mitch Fifield, spoke against the motion. That is because as a supporter of the right-wing organisation, the Institute of Public Affairs (IPA), Fifield supports the idea but knows politically he cannot say so. So, for public consumption, he voted against the motion.

The Saturday Paper revealed Fifield's real views, expressed back in 2008 when he said:

“Conservatives have often floated the prospect of privatising the ABC and Australia Post. There is merit in such proposals.”

According to the Saturday Paper:

‘But Fifield conceded it would not be easy politically. He anticipated “widespread misunderstanding of the consequences by the public” and acknowledged that “any government prepared to go down that path would need to prepare the ground … ”‘

Instead of supporting its overt privatisation, Fifield used weasel words to cover up his long-term goal and the long-term goal of his IPA and other Liberal Party mates, to sell off the ABC.

“We do have a range of measures that we’re seeking to implement to enhance the efficiency, the accountability and transparency of the ABC operation.”

These words are code for bringing the ABC into the realm of the Turnbull Government’s (small) groupthink. It is part of a pattern of frightening the ABC into submission to the Government’s worldview. Thus the Prime Minister has complained about two Emma Alberici articles. In the last five months, Fifield has made six complaints against the ABC. In my opinion, there is no substance to these complaints. They are aimed at muzzling it.

The hardheads in the Libs know they don’t need a fight over ABC privatisation; they can achieve the same ends doing what they’re doing now - declaring their support for public broadcasting while slowly starving it to death.

The Government has been preparing the ABC for privatisation. It is a classic tactic. Run down a public asset and then use that as a reason to sell it to "improve" it. How has the Government run down the ABC? Let me count the ways.

It was the Turnbull Government who appointed former Murdoch executive Michelle Guthrie to the position of managing director of the ABC. She has cut staff and talked about "improving" the ABC. "Improving" in this context means making it a right-wing mouthpiece — which it is not, yet. It is, however, "normalising" and making respectable the views of the IPA and other reactionaries to audiences across Australia. This is not balance — it is pandering.

Stop the dumbing down of the ABC https://t.co/vY2OVayP7t via @smh

Far from being a home of the left, the ABC is a conservative organisation which runs some good entertainment programs and sometimes okay political programs. When was the last time a socialist commentator appeared on ABC TV or radio? Okay, ABC radio stations have interviewed me twice in the past three years, once for my poetry and once for my tax expertise, so these don’t count.

What this Government does not like is objective analysis. The ABC sometimes does that and it gets the Government’s goat up. Far better for them an Alan Jones or Peta Credlin spouting the Government’s line than a journalist asking questions that require a real response.

It is the public which supports the "old" ABC over the Murdochised one. This is because they have relied on it for many years or because they appreciate what used to be its even-handed delivery of news and debate. You cannot, for example, rely on commercial interests to deliver vital information, entertainment and services to the rural and regional sector. It isn’t profitable.

A news bulletin from 2020: "Several families were killed in a raging bush fire near Kilmore today. They were unaware of the approaching danger because the newly privatised ABC radio service saw no profit in broadcasting emergency services information". #auspol

The Australian is not profitable either, but Rupert Murdoch keeps it going because he thinks a $10-20 million-a-year loss is a small price to pay to influence Australia’s political system.

The problem for those who would destroy the ABC is that, according to Australian National University analysis, the general public is, by and large, well to the left of politicians and the media. Politicians and the media are the ballast that drags our politics to the right. Rather than representing our interests they represent the interests of capital. They disagree sometimes on how best to do that. The destruction of the ABC is part of that debate among those who would manage Australia capitalism.

Some readers might say – as Fifield did – that selling the ABC is not Turnbull Government policy. Treasurer Scott Morrison and Environment and Energy Minister Josh Frydenberg said much the same thing. They would say that wouldn’t they?

Make no mistake. The Liberals and the Murdochracy, as thick as thieves, are mounting a war of attrition upon the ABC. Death by a thousand cuts. They must not get away with it. https://t.co/mvEbUz2QeZ

But what they really think is different. I have already outlined what Fifield really thinks. They are in effect already underfunding the ABC to keep it quiet and compliant and eventually sell it off.

You cannot trust the conservatives when it comes to the public broadcasters. Remember Tony Abbott the day before the 2013 election?

He said there would be:

All turned out to be lies. And speaking of SBS, the Liberal Council also voted for an "efficiency" review of SBS. Be afraid.

All of this gives Labor wonderful ammunition and they will make political capital out of it. They had already committed to restoring the $84 million in Turnbull Government funding cuts.

How, then, can we defend the ABC? The time for being meek and mild is over. Let’s organise protests across the country. Perhaps ABC workers could walk off the job until funding is restored, and a new direction for the national broadcaster that more adequately reflects Australian society and its left-wing views begins? Otherwise, the Turnbull Government will strangle the ABC by stealth.

Read more by John Passant on his website En Passant or follow him on Twitter @JohnPassant. Signed copies of John's first book of poetry, Songs for the Band Unformed(Ginninderra Press 2016), are available for purchase from the IA store HERE.

PLEASE DONATE TO THE ABC FRIENDS CROWDFUNDING APPEAL! The ABC is being strangled by your government. We need funds to mount rallies in July, pay for newspaper advertising and the creation of more videos to increase political pressure. JOIN THE FIGHT! https://t.co/PjuqAgLkBQ pic.twitter.com/8Ha1NaVwOY