Why not tax the rich instead of screwing the less well off?

John Passant examines Labor's social welfare policies and finds they are edging closer to those of the Coalition rather than a progressive workers' party.

I HAD BEEN wondering if Labor (ALP) were going to be Hillary Clinton or Bernie Sanders in our election.

As the ALP has begun announcing policies to cut social welfare, the answer is becoming clearer. They are just another party of neoliberalism and budget deficit fetishism. They are Hillary, not Bernie.

Why, for example, has Labor backflipped on its previously strong opposition to removing the Schoolkids Bonus and to imposing a new pension assets test, both of which cut living standards? Over four years, this would "save" $4.5 billion and $3.6 billion, respectively.

According to Opposition Treasury Spokesperson Chris Bowen, you can blame ratings agency Moody’s. Moody's said after the 3 May Coalition Government Budget, that the forecasts were optimistic and warned that Australia’s triple-A credit rating was at risk from ongoing Budget deficits and increasing government debt.

Bowen also blamed the Abbott/Turnbull Government. Trebling the budget deficit means we too, like the Turnbull Government, have to attack pensioners and families with schoolkids, seemed to be his basic message.

Labor should be working on an economic model that challenges neoliberalism. It's flawed ideology, we need an alternative. #qanda #ausvotes

So already we are seeing "putting people first" has some exclusions. There will be more exclusions in the run up to the election, in an attempt by Labor to show what good economic managers they are and how they can make the tough decisions.

Of course, what this really means is Labor is attempting to show the rich and powerful how they can run capitalism in their interests — not that of ordinary working people. If Labor are prepared to backflip on the schoolkids bonus and on pensions, what else might they back flip on? I’d bet money on Labor "adjusting" Family Tax Benefits after years of opposing any changes.

Before the election, they won’t backtrack on their commitment to education or Medicare, but after the election, If they win government, who knows? After all, if your number one priority is the triple-A credit rating then presumably nothing is sacred in the hunt for budget "savings".

Actually, something is sacred. Labor won’t tax the rich to fix up the Budget mess. While they won’t throw $48 billion at companies in tax cuts over ten years like the Government, they also won’t tax capital or the rich to reduce the deficit.

Australia is a low tax country, on a par with Turkey and South Korea in terms of tax as a percentage of GDP, and just above the U.S. This graph from the Treasury, sourced from OECD Revenue Statistics, makes the point well. 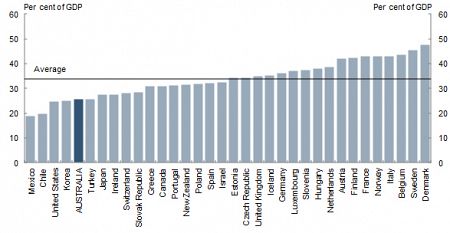 According to the Treasury:

Australia’s tax-to-GDP ratio is low by international standards. In 2010 (Australia’s 2010-11 financial year), the latest year for which comparable international data is available, Australia had the fifth lowest tax burden of the OECD countries (Chart 1) and has typically ranked in the bottom third of countries since 1965 (when comparable data was first available). In 2010, Australia’s tax-to-GDP ratio was 25.6 per cent — below the OECD average of 33.8 per cent.

There is also a myth that Australia’s tax system is progressive. In fact, analysis from NATSEM, contained in the ACOSS report on inequality, shows that Australia’s tax take (including GST as well as income tax) across various income quintiles fluctuates around 25%, with those on lower incomes as a generalisation a bit below and those with higher incomes a bit above that figure. However, it gets worse when we compare the two ends of the income spectrum. The bottom 5% pay 34.2% of their income in taxes while the top 5% pay 30.1% in tax. 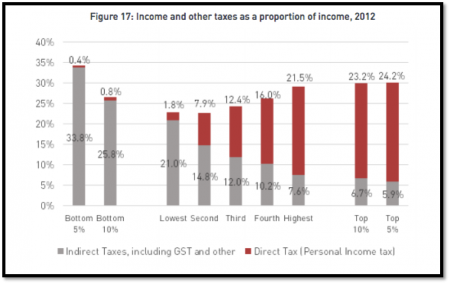 So a party that wanted to put people first, instead of attacking families and pensioners, might consider taxing the rich and powerful instead. Making the income tax system more progressive with higher rates for those on high incomes (say kicking in at $130,000 where few workers are) would be a good start.

So, too, would addressing the top 10% of income earners who gain almost half the tax benefits (about $17 billion) from the $40 billion in superannuation tax concessions, the capital gains discount and negative gearing losses. Instead of getting just a little from them with the minor changes they have so far proposed, why doesn’t Labor abolish these concessions and use the $40 billion in revenue to improve pensions and public health and education, with the rest going towards budget deficit reduction? Alternatively, just abolishing the benefits for the top 10% would give Labor about $17 billion for socially useful spending. 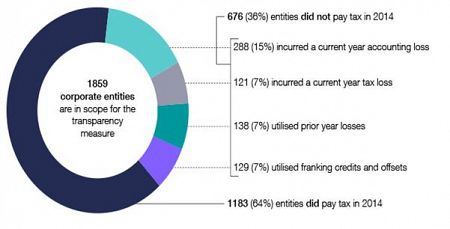 The Commissioner of Taxation’s recently released Corporate Tax Transparency Reports show that 36% of big business paid no income tax in 2013/2014. Many more have effective tax rates below 10%, while the statutory company tax rate is 30%. The amount of revenue those untaxed companies earned was $454 billion. A small "Buffett" style tax on these non-taxpaying companies – a fee, if you like, for the privilege of operating in Australia – of say 3% would yield on these figures about $13 billion. A further reducing fee on this with effective tax rates less than 20% would produce billions more.

Wealth in Australia is very unequally held. According to ACOSS' report on inequality, the top 20% own 60.8% of all the wealth, while the bottom 20% own just 0.9%.

Thomas Piketty and other economists have argued increasing inequality of both income and wealth threatens the economy and democracy. He and others have proposed a global wealth tax to stop this. Australia could take the lead and impose a net wealth tax on say the top 10% of wealth owners who, according to ACOSS, own 45% of Australia’s net wealth.

The incoming governor of the Reserve Bank has estimated that Australia’s net wealth is $10 trillion, so that top 10% own about $4.5 trillion. A 1% net wealth tax on that 10% would yield about $45 billion annually, more than enough for the Budget deficit fetishists to have their fantasies fulfilled. Or even to spend on socially useful proposals like addressing climate change, poverty, health and education to name a few.

More divide between rich and poor than in 1950's Australia. https://t.co/OxqkOjkMuY

If that is a step too far, what about death duties? These are wealth taxes that arise on the transfer of wealth from one generation to the next. Most developed countries have them.

In the 1970s, Joh Bjekle-Petersen abolished estate and gift duties in Queensland and the other states, panicked by images of this tax competition seeing millions flock to the Gold Coast, followed suit. Labor could easily structure Commonwealth estate and gift duties that applied to the top 10% of estates — by my back of the envelope calculations, estates worth somewhere around $3.5 million to $4 million.

Labor won’t do any of this. It proposed an increased tobacco excise tax, effectively a tax on poorer people because they smoke more to try and address their alienation. It will cut social spending on pensioners and families. It will, no doubt, refine Medicare and university spending and Gonski. I can imagine if elected they will discover a big black hole to justify all of this.

What it won’t do is tax the rich and powerful since that is who Labor, like the Coalition, really rule for.

John Passant is a former assistant commissioner of the Australian Tax Office. Read more by John on his website en Passant. You can also follow him on Twitter @JohnPassant.

The liberal-democratic model of capitalism is becoming increasingly skewed towards entrenched wealth. https://t.co/P0DEkeAvNS

Inequality overload: World's 62 richest people now own as much as poorest half https://t.co/0kHKrP9Ydm @IndependentAus