The things we do for love: Joe Hockey after dark

The one thing Joe Hockey needs to be able to bring down a Budget that cuts money to the needy – moral authority – he does not have any more.

The Sydney Morning Herald headline, Treasurer for sale, and the ‘VIP’ meetings Joe accorded to those who paid up to $22,000 to the Millennium Forum — his North Sydney backers’ front organisation, means every cent he allots to advantage big business hereafter, every cent he denies teenagers, old people and the mothers of school children, is tainted.

And he really should stand down as treasurer till he is investigated and Mathias Cormann announce the Budget, in his comic Schwarzenegger accent, in his place.

Since Askin’s time, the kickback to the crooked mate has been the Liberal way in New South Wales, and those ‘colourful Sydney identities’, Hockey and Abbott, have splashed about in the trough of this tradition for years now. One has only to think of Abbott’s personally administered slush fund ‘Australians For Honest Politics’ which was used to gaol, wrongly, Pauline Hanson and David Ettridge and to slander, lethally, Cheryl Kernot, to realise how many legs this influential centipede has walked on down the years since Robert Askin opened his gambling den, the Forbes Club, and NSW police kept Four Corners, at gunpoint, out of it.

There is no reason to suspect this method of dealing (so celebrated in Rake) ever ceased.

Nick Greiner ended the luxurious sleeping trains to Brisbane and Melbourne, and sold off the twinette carriages to a mate, for, I think, $800 each — for use in a private nostalgic rural tourism plan that never eventuated. There were the gambling licences, and the development permissions, James Packer so smoothly achieved in Darling Harbour. There was the $20 million Assistant Treasurer Arthur Sinodinos was to get for securing former NSW Premier Barry O’Farrell’s signature, if he could, on a $500 million dollar contract to sluice sewage smoothly to some new-built western suburbs. 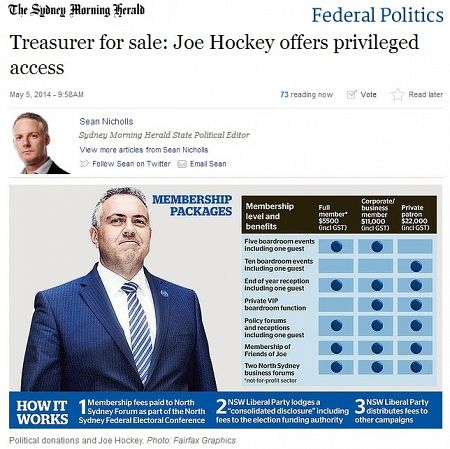 Greiner, wonderfully – and what a goose he is – on radio a fortnight ago said lobbying was an essential part of the democratic process and he, himself, would have accepted the now notorious Grange and, moreover, drunk it.

He said this a fortnight ago, which shows how accepted, how smugly boasted, how self-righteously embraced and how long-standing it is.

And the treasurer and the prime minister are part of it. Bribed men who, lying, said no student, old person, ABC employee or mother would be worse off.

It is hard to imagine a GG as honourable as Sir Peter Cosgrove not demanding from them reasons why he should not dismiss them and call fresh elections if – as it seemed – their acquisition of government was so riddled with dishonest process, and dishonoured vows.

It is equally hard to imagine what they would say in response. 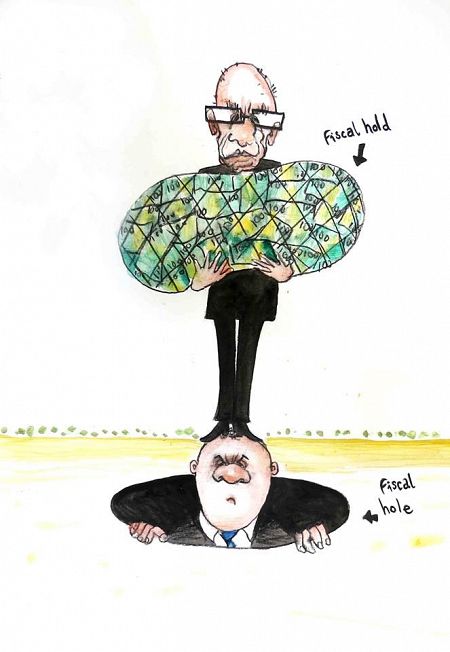