Lending credence to the momentum behind Bernie Sanders' grassroots campaign, a new poll [PDF] released this week finds that Democratic primary voters prefer socialism to capitalism by a wide margin. Nearly two-thirds of those polled also believed that socialism has a beneficial impact on society. 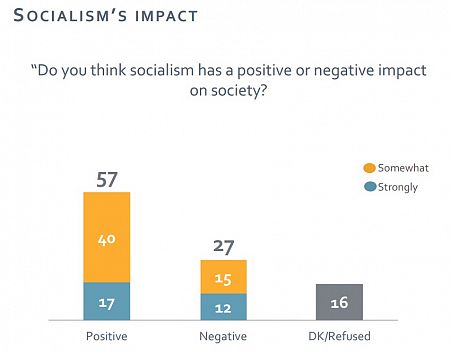 The conservative organization, among others, feigned surprise regarding its findings:

One might argue that the poll was intended to underscore how, as one conservative Super PAC official noted, far left Democratic voters have moved:

The poll was careful to avoid mention of the current election – and the candidate who is running as a "democratic socialist" – focusing instead on the differences between ideologies.

'Which of the following statements do you agree with most?' the poll question was phrased, and went on to define the two systems.

'... say it's not the government's job to pick winners and losers and that government intervention only leads to inefficiency. They say that capitalism produces the greatest amount of personal and economic freedom [and the best outcome for society] even if some people are left behind because they can't compete.'

The poll stated that people who support socialism, on the other hand, believe that 'corporations have too much control and that the capitalist system is set to favor the rich and powerful' and the government should

'... take a larger role in managing the economy to make sure that every individual has equal access to basic necessities and public goods, even if that means that some people have to transfer their wealth to others.'

In response, 40 per cent of those polled said they preferred socialism while only 25 per cent chose capitalism:

The preference for socialism held true for all demographic groups:

The kids are all right: an overwhelming majority of young Democrats like socialism. https://t.co/QtZtT2QsNT pic.twitter.com/iBgSQCVM2J

While Bernie Sanders was not specifically mentioned, his running for president on a platform of democratic socialism prompted the poll, Politico reported:

"Now you finally have someone who’s running for president — not just running, but doing very well, is very competitive, may very well be the nominee — who calls himself a socialist,” said Mike Shields, a veteran GOP operative and former Republican National Committee chief of staff. “So we thought it would be worth going past the leadership of the party to see what the primary electorate itself thinks."

The overarching concept of democratic socialism and such issues as free tuition for public universities and a single-payer healthcare system have defined Sanders' campaign. The senator's swift ascent among Democratic voters further supports the poll's findings, and such results also point to the potential for Sanders' momentum to build ahead of Super Tuesday.

This story was originally published by Common Dreams on 22/2/16 under the heading 'Most Democrats Prefer Socialism to Capitalism' and has been republished under a Creative Commons licence.