The sage of Jacksonville

The sage of Jacksonville, Peter Wicks, reports on what's gone on in the wake of Michael Williamson's arrest on Thursday. 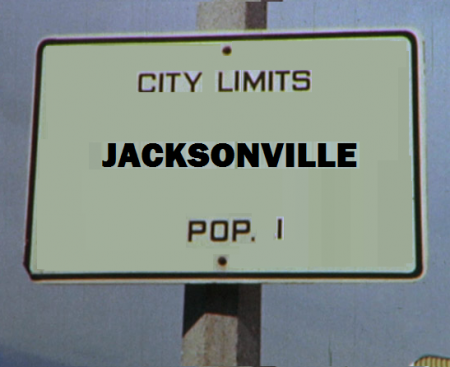 AFTER a day of guessing, blind finger-pointing and pure speculation, we can be sure of one thing, Michael Williamson is in a bit of a pickle sandwich. Although many would suggest it is another type of sandwich.

Williamson was charged with 20 offences yesterday and let go on $50,000 bail while his house was searched, and items such as computer equipment removed.

Most of the charges relate to alleged attempts to hinder the police investigation, and these have included allegations relating to destruction of evidence and falsifying documents.

Mentioned by Detective Superintendent Colin Dyson were American Express Cards and the famous black bag that was allegedly attempted to be removed during the police raid on the HSU Pitt St offices back in May. Dyson has also told us that there are five former and current HSU officials under investigation who were allegedly recruited by Williamson to help destroy evidence.

In relation to these investigations, so far it can only be confirmed that Chris Williamson, Michael’s son, is one person being looked at for his part in the “black bag affair”. However, Bob Hull, who currently has a ticket in the upcoming election must have had a restless night, as it was his car that Chris, Michael, and the black bag were allegedly making a bee-line for.

Not only were the arrest and charges predicted here the evening beforehand, it was also predicted that the alleged blowhard, Kathy Jackson, would be standing in front of anything that resembled a camera and claiming vindication. This was, I am told, quite a problem with local kids using their camera phones, however she did manage to find a couple of TV cameras into which she could sprout the predicted spiel.

Kathy Jackson – who in the upcoming election is backing the tickets of Katrina Hart in NSW, and Fleur Behrens and Marco Bolano in Victoria – would do well to remember a few things.

Any of the spotlight she seems to so desperately crave, when shining on her, also throws light on her ex-husband and former HSU Vic Branch No 1 Secretary Jeff Jackson, along with her current fiancé, Fair Work Australia VP and average dancer, Michael Lawler. These blokes, I’m quite sure, much prefer the dark at the moment. Jeff has questions of his own to answer re HSU members' money and Michael is facing growing concerns over his alleged involvement in both the running of the HSU running and the FWA investigation into his fiancé’s union.

Some of you may remember this piece I wrote a while back that gave the details of Jackson having all the data cleaned off one of Michael Williamson's old notebooks via Premier Network Services, below is a link to the job sheet. I’m unsure if Strike Force Carnarvon are looking at this evidence, but if not, I would strongly suggest it may be an idea. 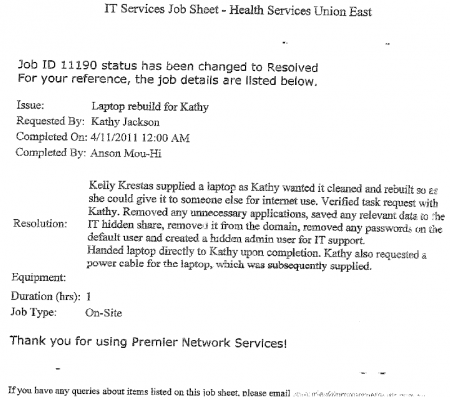 In the meantime, acting HSU national president, Chris Brown, reminded us last night that Victoria Police have an active investigation into Kathy Jackson in progress now, however allegedly due to the volume of documentation, this investigation is expected to last several months.

In regards to the Michael Williamson charges, this is just the tip of the iceberg. These charges are all to do with hindering investigations, and attempts to pervert the course of justice. These charges alone could carry up to seven years imprisonment in total in Michael is found guilty on all.

The real substance in the sandwich will come when we come to the actual investigation that was attempting to be hindered ― which is, of course, the Canme investigation. However, it needs to be remembered that there is also the United Edge and Studio 19, which Williamson also owns and has HSU connections.


"I just want to say to the members that I understand that today is a confronting day for union members, but hopefully this will help members in their decision to vote for a fresh start in union elections."

I tend to agree, though where we would disagree is that I tend to think that a fresh start does not involve replacing one allegedly corrupt faction in NSW with the faction that has left the Union in Victoria utterly decimated.

A truly fresh start would not involve any connection with Kathy Jackson, Marco Bolano, Fleur Behrens or Katrina Hart.


(Catch up on the whole story, including our 26 investigative stories at our dedicated Jacksonville page.)