AUSTRALIA'S hard right is about to receive a serious, if not fatal, body blow.

As we now know, the entire Trump administration colluded with the Russian Government to alter the course of the U.S. election.

During 2016, Russia waged intense cyber-warfare against democratic forces in the United States. Russia employed Bulgarian hackers by the score and bots by the thousands to destroy, not only Clinton and Sanders, but also Republican candidates like Bush and Rubio.

Putin wanted only one man to win: Donald Trump. The one guy who could guarantee the unfettered expansion of the Russian kleptocracy.

The links between the Trump mob and Putin are deep and becoming more complex by the day, as revelation after revelation of Team Trump’s collusion with the Russians to hijack the presidential race pour forth on a daily basis. 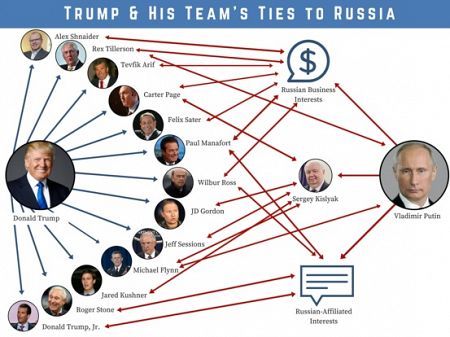 Trump has an immense web of ties to Russia (Image via swalwell.house.gov.)

It is, as they say, dead-set gnarly.

And it is going to get much worse.

Trump and his cronies are under investigation by the FBI, the Senate Investigation Committee and the House Committee — although the latter might not go anywhere since its head, Republican Devin Nunes, has been accused by the likes of John McCain of conspiring to destroy the House investigation:

The head of the Senate Investigation Committee, Democrat Adam Schiff, also weighed in.

Lt General Michael Flynn, forced to resign his position as Trump’s national security advisor for allegedly misleading the aforementioned Nunes over his contact with the Russians (turns our he was also working for Turkey), was made a "patsy" and is now seeking immunity.

According to the Wall Street Journal:

'Mike Flynn, President Donald Trump’s former national security adviser, has told the Federal Bureau of Investigation and congressional officials investigating the Trump campaign’s potential ties to Russia that he is willing to be interviewed in exchange for a grant of immunity from prosecution, according to officials with knowledge of the matter.'

And according to the ‘Counsel to Lt General Mike Flynn (Retired)’:

'General Flynn certainly has a story to tell, and he very much wants to tell it, should the circumstances permit.'

People seeking immunity usually share two traits: they are guilty and they dob on people higher up. The only "up" for Flynn was Trump himself.

Talk about "rats in the ranks".

But we have a few here as well.

Pauline Hanson is on record as praising Putin.

Asked about Mr Putin on Channel 9, Senator Hanson praised the Russian President as a man "standing up for his nation".

"I've got no problems with Vladimir," she said.

"I think the whole fact is – and I'm hearing from other people – Vladimir Putin and Donald Trump are strong leaders. You may not agree with what they do, but they are prepared to make a decision and they have the country's best interests at heart.

"That's what people want from leaders here in this nation."

Team Trump/Putin has taken a seat at the heart of One Nation.

'The former Trump campaign economist who is now the key economic adviser to Pauline Hanson's One Nation has company tax cuts, desalination plants and the Reserve Bank in his sights as the minor party ramps up its economic policies.'

Thanks to Senator Malcolm Roberts, Pauline even cracked an invite to Trump’s inauguration.

Would you believe it? I have been gifted tickets to the Presidential Inauguration Ceremony of @realDonaldTrump - What an honour! #auspol

In the end, Pauline didn’t go. She claimed work commitments, but it is worth noting her chief-of-staff James Ashby’s previous criminal conviction might have made U.S. travel tricky — and Pauline hates flying alone.

If Queensland Labor does not beat One Nation to a bloody pulp over Hanson's gushing love for the traitor Trump and his kleptocrat tyrant buddy Putin, they are in the wrong caper.

These are the kind of rulers Pauline would have Australia live under.

If you think the Liberals are bad …

And let's not forget the Beast. Cory Bernardi will be forever tainted by his stupid trucker’s hat firmly aligning him with Trump’s version of populism — lie, cheat, betray, bluster. He is shown to be a complete goose, all ideology and zero discernment.

And the Australian Alt-Right? Their former Breitbart hero, Steve Bannon, is Trump’s chief campaign strategist and that is working out pretty well so far. He has given us a new equation: AR = t, where AR = Alt-Right and t = traitors.

So, as you follow the fortunes of Hanson, Bernardi and the far right through 2017, remember one thing: the Russians are coming.