The misery of foreign farming in Africa

Farming cash crops such as coffee and sugar for Western importers has brought misery upon Africa, says Evaggelos Vallianatos. 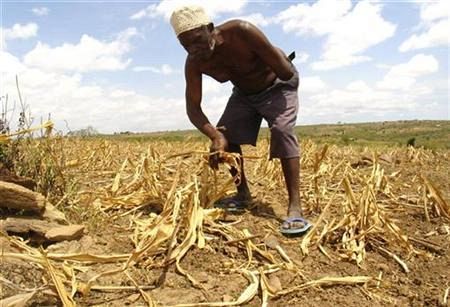 In 1769, J. H. Bernardin de Saint Pierre, a French royal officer, said he was not so sure that coffee and sugar were "really essential to the comfort of Europe". But he was certain that these two crops

"…have brought wretchedness and misery upon America and Africa. The former is depopulated, that Europeans may have a land to plant them in and the latter is stripped of its inhabitants, for hands to cultivate them." (1)

About two and a half centuries later, in 2011, Africans are producing, more or less, the cash crops they were forced to cultivate during the time of Bernardin de Saint Pierre: cocoa, coffee, sugar, peanuts, cotton, rubber, tea, palm oil, timber and tobacco.

The violence of the old colonial system keeps resurfacing in the bleak faces of malnutrition and hunger.

For example, millions of Africans are desperately malnourished and hungry in the horn of Africa. In August 2011, the Food and Agriculture Organization of the United Nations reported that 12 million people in Djibouti, Ethiopia, Kenya, Somalia and Uganda required "emergency assistance." The UN News Service repeatedly emphasizes the "acute malnutrition" and "dire" famine conditions in Somalia.

Somalia is not merely starving but, since the early 1990s, is without a government. Warlords have divided the country into satrapies — some fighting a jihad against Christians and Americans, in particular; others armed by America track down and kill those supporting the Islamists fighting the United States. The CIA is using Somalia to wage a proxy war against "terrorism."

Despite these cycles of hunger and violence, business as usual and warfare dominate Africa. Without Russia funding wars against capitalist America in Africa, most African states have turned to the exploitation of their natural resources with borrowed money and ideas from the West. And since they have very little to export save their rare minerals or petroleum, Africans continue the colonial tradition of cash cropping. However, cash crops for export take more and more of the best land from local food production, forcing peasants to bring additional marginal land under cultivation. In addition, Western experts and their governments are convincing Africans to industrialize their agriculture.

In fact, just like the Rockefeller Foundation in the 1940s and after spearheaded the making of Mexican farmers in the model of Iowa farmers, now the Gates Foundation is in charge of an even more destructive practice for Africa: embarking on the road to genetic engineering whereby African or imported crop seeds will have their natures scrambled before they reach the soil, becoming products of Monsanto. Mike Ludwig of Truthout has documented how Monsanto and Gates Foundation "push GE crops on Africa".

Africans eat mostly imported wheat, corn and rice — though rice in West Africa is at the heart of peasant farming. About half of the African people eat roots, tubers and plantains.

In addition, Africans eat elephants, monkeys, gorillas, chimpanzees, zebras, lions and tigers. This "bushmeat" is now a large business facilitated by logging, modern weapons and the demand for exports. Bushmeat also serves the cuisines of hotels all over Africa.

Why Africans eat their rare wild animals and fewer and fewer of their own agricultural crops goes to the very heart of their hunger and dependency on others.

The Europeans heaped scorn on the fantastic variety of Africa's indigenous cereals. They classified the African grains as cattle feed. That is why – and not so much because of urbanization, perishability of food or labor requirements – many of the 2,000 varieties of indigenous grains, roots, fruits, and other food plants have been "lost" — at least from the daily diet of most Africans.

But these foods still exist in Africa and they are the answer to the tremendous food insecurity of so many millions of human beings in both Africa and elsewhere in the world.

In a 1996 study, "Lost Crops of Africa", the US National Academy of Sciences says that Africa's native cereals – like rice, finger millet, fonio, pearl millet, sorghum, tef, guinea millet and dozens of wild cereals – present a "local legacy of genetic wealth upon which a sound food future might be built".(2)

Africa's cereals are also tolerant of heat, cold, drought, water logging and infertile land. They are also nutritious and tasty. Thus, these African native cereals do what genetic engineers dream of doing to wheat, rice and corn.

The Academy of Sciences study says that Africa's "lost" plants may benefit more than Africa because "they represent an exceptional cluster of cereal biodiversity with particular promise for solving some of the food production problems that will arise in the twenty-first century".(3)

The worst of those "problems" is the narrow base of biological diversity afflicting American crops. In their relentless search for crops to fit giant machines, huge farms and profit, American scientists and agribusiness men rely on a handful of crops for most of the country's food. The Academy had this tragic reality in mind in praising the "lost" cereals of Africa.

These crops of Africa present Africa and the rest of the world with a great opportunity to join the African peasants, who still use many of these indigenous food plants, in building Africa's food security around Africa's own food, people and culture.

Convinced of the science and justice for food security for Africa, I tried to do something about it. This was 1996 when the Academy study came out. I was then working for the US Environmental Protection Agency (EPA). It happened that, in 1995-1996, EPA seconded me to the UN Development Programme (UNDP) in New York. UNDP is the UN agency for uplifting poor people out of poverty — or so I thought.

I focused on the Academy report. In a memorandum of April 16, 1996, ("Food Security for Sub-Sahara Africa"), I urged the UNDP to adopt the findings of the Academy study, translating them into policy. This meant the UNDP siding with the peasants and traditional, not industrialized, agriculture. But the UNDP is not in the business of revolution, so it ignored my recommendations.

When I returned to the EPA, I made another effort to convince policy makers in Washington DC of the wisdom of the Academy report on Africa. In 1998, I met the director of global programs of the US Agency for International Development (USAID), an organization of the State Department. The senior official of USAID was a Harvard professor of anthropology. When I explained that the Academy report had an answer for helping Africa out of famine and hunger, he said to me I was dreaming. "Don't you watch TV," he asked me. "Don't you know that all that president Bill Clinton cares about is Monica Lewinsky?"

I told the professor that the sexual interest of Clinton was none of my business. I said Clinton might be convinced of doing something of great importance for Africa — and America. But the professor would have none of this.

Despite this disappointment, I talked to two officials at the White House Office of Science and Technology Policy about helping Africa fight hunger. I volunteered to prepare a briefing for President Bill Clinton. I proposed a small project costing a few million dollars. This would involve duplicating seeds and distributing those seeds for growing food. I was certain such a gesture might be just what we needed to set the course for a different strategy for development in Africa.

I never heard from those officials.

Probably the UNDP, USAID and White House bureaucrats figured out my innocent project had deeper implications — the dismantling of the colonial cash cropping culture and the distribution of that cash crop land to the peasants.

Clearly, coffee and sugar made Africa very unhappy. The French observer of the mature, but beastly, colonial system, Bernardin de Saint Pierre, was right — Europe, and the Europeans in America, tore Africa to pieces for their pleasure. In the Congo, for instance, Belgian and French soldiers and agents of cash cropping companies carried "fire and sword from one end of the country to the other" in order to force the Africans to work rubber.(4)

An African writer and observer of the evolving colonial system, Chinua Achebe, captured the anguish of Africa in 1959 when he said, "all our gods are weeping". Foreigners disrupted the peasants' sacred farming with cash cropping and forced them to abandon their ancestral gods.(5)

It would not be easy for Africa to return to her pre-colonial culture. The entire international system would oppose that kind of metamorphosis. Even scrapping sub-Saharan Africa's plantation agriculture alone would cause alarm (and even violence) in Europe, North America and Africa (and probably panic in the international system's powerful agencies like the World Bank, UNDP, the UN Food and Agriculture Organization and the World Trade Organization).

Yet, cash cropping for the benefit of a few Africans and foreigners ought to find no more room in Africa. Only then, the gods of Africa would cease weeping — and the lengthy process of reconstruction might have a chance to heal the enormous wounds of foreign domination and ruthless colonialism.

In Africa, agriculture will nurture freedom and democracy when all land from the cash crop plantations passes on to the peasants. In addition, giving land to the African peasants is certain to inspire their distant relatives in the United States, the threatened black family farmers, to keep fighting for their land and freedom.

1. J. H. Bernardin de Saint Pierre, "A Voyage to the Isle of France, the Isle of Bourbon and the Cape of Good Hope; with Observations and Reflections Upon Nature and Mankind" (London: J. Cundee, 1800) 119-120.

(Evaggelos Vallianatos is a former analyst with the US Environmental Protection Agency (EPA) and is the author of "Fear in the Countryside" and "Harvest of Devastation". This story was originally published in Truthout on Wednesday 9 November 2011 and has been republished under a Creative Commons licence.)