The Liberals after Brock

With the polls turning decisively against them, cracks appearing daily and the South Australian election result denying them a blue continent, Bob Ellis says the Wolves are being turned away from the door.

After Brock’s decision, a narrow one, Weatherill will be Premier for six more years. Marshall will be overthrown next year. Labor will take Victoria in November; New South Wales in March; Queensland, probably, in April or May; and Abbott will be overthrown and replaced, by Hockey maybe, soon after our hundredth Anzac Day, and the Liberal Party disintegrate thereafter and the Katter-Palmer party replace it and the Joyce Nationals interbreed with it and become the second force.

Three hundred changed votes in Ashford might have prevented this — but there you go.

The ‘Blue Continent’ scenario – so beloved of Kelly, Grattan, Uhlmann and the two Joneses – is now inoperative, defunct, redundant, and past caring; and our oldest, most resilient party is on the way back. It will be a red continent, probably, by 2017, with only a blue Tasmania.

This is because … well ... it’s because the face of the Wolf has been shown protruding from the sheeps’ garb in every state; because Holden, Toyota, Qantas and Ardmona show they mean us ill; because Sinodinos shows how greedy they are; and Morrison how cruel; and Brandis how bigoted.

It is not the party any more of Hewson, Chaney, Peacock, Fraser, Collins, Hamer, Hasluck, Casey, Menzies, of Commonwealth Scholarships and a protected rural sector. It is not the party that, under Chipp, ceased censoring art films and, under Holt, enfranchised Aborigines and abolished White Australia; not the party that, under Fraser, protested an invasion by Soviet Russia of an adjacent country by seeking to boycott the Olympic Games, and welcomed boat-arriving refugees from a country we helped ravage in a losing war.

It is a party more squalid, corrupt, small-minded and mingy than that. It is more like the party of Smith in Southern Rhodesia or Orval Faubus in Arkansas.

On the weekend, Abbott applauded O’Neill for closing down an investigation into a murder, and the violent injury of sixty men by prison guards with clubs and knives. He spent another $10 million looking for wreckage in an area of sea the size of Queensland — money that will now not be spent on the disabled, or dyslexic schoolchildren, or cancer research, or saving honourable industries. He will spend a hundred million, two hundred million, looking for bits of plane that could have been spent on flood relief, or a robotic cure for blindness, before someone tells him – Palmer, perhaps, Credlin, perhaps – that it is money wasted.

Figures like these, and figures like those attached to $inodino$, mean they have no credibility now. $800 million goes to Murdoch — but not $1 to schoolkids buying text books. Billions in tax relief to Rinehart — but not a dollar to Holden, or Toyota. Children’s lives are being smashed by the sacking of their father and their forced removal to a smaller dwelling in a distant town, away from their friends and their good school.

And the Wolves don’t care.

These kids are fair game and fine feasting for some longtime party crony who puts another $10 million in the bank and buys a chalet in Gstaadt. If ever there was a worship of the golden calf and a breaking of the ten commandments, it is here, and now, by these awful, sabre-toothed people.

Killing. Stealing. Coveting. Dishonouring our parents’ generation. If it’s wrong, they’re up for it. If a dollar can be swindled out of the blameless and the needy, they will find a clause to extract it.

They are what Shaw called, in words he gave his character Jesus of Nazareth:

‘The spirit of the wolf, striving to return.’

Morgan shows them on 46.5 percent, two-party preferred, losing a million votes and fifty seats, and two Senate seats in Western Australia; and even Newspoll, which mostly favours the Wolves, has them on 48 and losing government.

George Brandis has a weird notion of freedom. Personally, I'd like to live in a society free of racism, bigotry and hate speech. 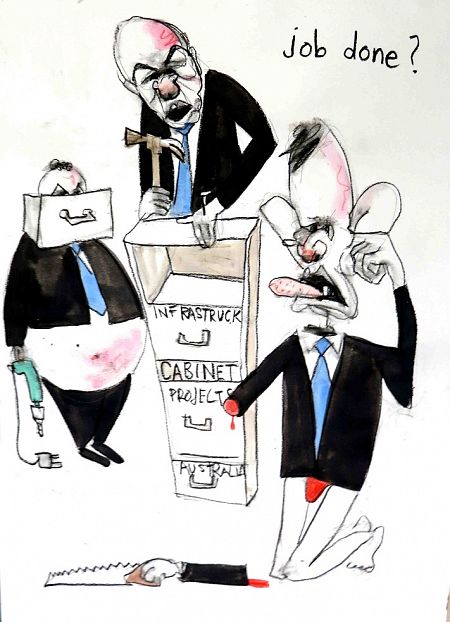