Across the nation, the news gets worse for this bunch of weirdos posing as a Government, writes Bob Ellis.

One thing we won’t see this weekend is a poll of any kind — especially a Preferred prime minister one, because it would have Shorten 14 or 16 per cent ahead, and SkyNews doesn’t want that.

Abbott still deludedly carries on as if the Budget has a raindrop’s chance in Hell of getting through and Palmer can be persuaded to vote for nine-tenths of it and he, Palmer, is not serious about free universities and giving money back to the old.

Across the nation, the news gets worse for this bunch of weirdos posing as a Government.

The students who finished their university course five years ago will now pay $3,000 to $7,000 more.

Morrison has cancelled $140,000 – a sum as small as that – for the refugee advocates because of Labor’s "failed economic management", though Abbott promises a $½ billion more to search for a plane in the sea that might have gone to schoolkids’ texts, uniforms and outings. Meanwhile, Turnbull is publicly chiding him for sneering at Palmer, whose good they will need most.

The penny may have dropped for Abbott, I think, since the desolation in his bare, blank smiles and shrieky voice is vivid now.

But Hockey thinks he still has power and influence. That he is the least successful Treasurer in our history has not dawned on him.

.@JoeHockey going after pensioners in #budbet2014. Well, someone has to pay for all those mining tax breaks #auspol pic.twitter.com/zfm4C1BnC9

He has got the deficit levy through, enraging his party’s backers; he will drive, by killing off their languages, a few dozen more First Australians to suicide; and he will get, probably, the reward-for-pregnant millionaires bonanza through, enraging eight million lesser, older women — but everywhere else he looks is a valley of dry bones.

The new HECS arrangements will not get through — for the dead or the living.

The GP co-payment will fail and 50 per cent of the Liberal vote in the over-fifties go to Palmer or Labor.

He will have to explain why his bottom line is $20 billion sandwiches short of a picnic — yet is not serious enough to have a double dissolution over.

Joe is in deep trouble and in normal circumstances would fall on his sword to placate Palmer, but this will not occur.

It’s because he showed, when saying dead students’ pregnant widows should be made to pay for unfinished courses no-one now will benefit by, he showed himself to be a hateful person; a snake-oil merchant who said: hey, get sick now, old girl, die now, old girl, but with your money we’ll cure cancer later.

He also said "the Federation is broken", which is effectively saying ‘Australia is broken’, though many of us thought it had a future. He showed our national concepts, like the fire brigade, and the surf life saver, and the mutual society, are foreign to his dog-eat-dog way of thinking and ethic of revenge.

He calls it an Age of Entitlement — we call it a Fair Go. He owns two farms and four houses and calls on us to ‘sacrifice’ our health and our children’s education so he can keep them. And he hopes this call will be convincing.

Joe Hockey's budget beyond the Australian concept of fair - The Age http://t.co/aqPMBPdMKV

It is a treasurer’s job to be disliked, but this is difference. Old women want to spit on him and this is rare.

Abbott has 1.5 million votes less than he won with in September and it is unlikely he will get any more than two or three hundred of them back. It is more likely he will lose ten thousand more. This means his own seat will go, Hockey’s, Morrison’s, Dutton’s, Pyne’s, Julie Bishop’s, Malcolm Turnbull’s and 40 others, and Philip Ruddock be the only significant Liberal left standing after the cataclysm that will come if Abbott is not replaced in the next few days or, at worst, by September.

And I am not betting money on it and I might be wrong, but I think it’s extremely likely he will be gone by Friday, with his successor – Dutton, perhaps – sacking Joe by Monday week.

And so it goes. Maybe. 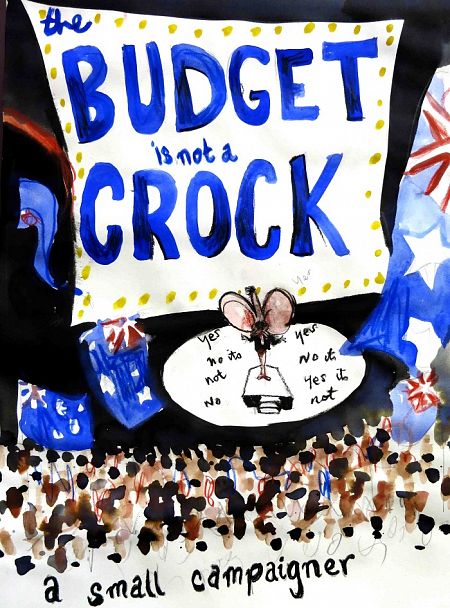