The incredible shrinking prime minister has finally dropped his bundle and lost his nerve.

In desperation, after six months of dithering, Malcolm Turnbull has gambled on an early election in July. He claims, with a straight face, that he must resuscitate a Howard-era relic, long dead, buried but not cremated, the ABCC, whose seven years of partisan attacks on unions cost taxpayers $135 million the last time it was inflicted on the construction workforce. He talks over Leigh Sales when she presents government evidence that the ABCC did not result in improved productivity. But there's more.

Apparently a Registered Organisations Commission (ROC) is also vital given a fifth of our workforce still in a union workplace.

Only with an industrial relations zombie and union bashing as its centrepiece can his government function as it should. Secretly, Mal's hoping that the Senate will be rid of its unrepresentative swill, even though LNP control of the upper house via a double dissolution is far from guaranteed.

He is referring to the Senate and also to Abbott and his Monkey Pod opposition.

Turnbull hopes to put a spoke in Abbott's wheel. The rabid right currently setting his government's homophobic, fundamentalist agenda can all back off; tighten up and fall in behind. Yet on the day of his big call, Abbott is madly claiming it will be an election fought on an Abbott agenda he quickly reinvents to feature refugee turn-backs and free trade agreements but no cuts to health or welfare. He does put in a plug for the ABCC and the ROC.

Turnbull is forced to fire his first big shot at his own side. In the Australian Financial Review on Tuesday, he tweaks his budgie-smuggler's beak. Abbott is wrong. Look at my fantastic achievements: media law reform, Senate voting reforms, changes to section 46 of the Competition and Consumer Act and last year's innovation statement. No-one could take this rebuttal seriously.

A double dissolution is a wild punt from a man who knows he stands to lose everything; a man whose opinion polls already have him on the skids and whose party rednecks are laughing at his lack of authority over them. Certainly, he may have seemed to do well out of high risk ventures in the past, as Tony McGrath, the liquidator of HIH, alleged in 2004 when naming Turnbull in his inquiry into how FAI came to be so overvalued just before HIH paid $300 million too much for the business. Then, as now, Turnbull fought tooth and nail when disaster seemed to be looming..

Let's just drop the pretence. Malcolm Turnbull doesn't give a toss about the building industry watchdog but he'll do anything to be top dog. 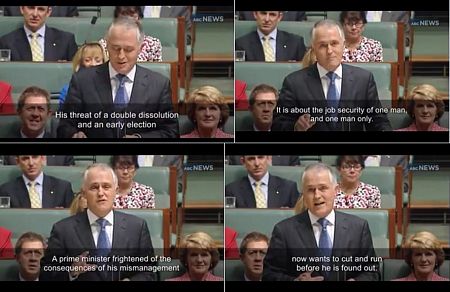 When words come back to bite you! Malcolm Turnbull in 2009 on Kevin Rudd's threat to call a double dissolution over the ETS. Click on the image to watch the video (via abc.net.au)

Desperate to assert his authority over a divided party, damaged by his predecessor's destabilisation campaign and unable to put together a coherent narrative on tax reform or budget repair, Turnbull needs an early election before his pose as a progressive and effective Liberal leader is revealed to all to be just a cruel hoax.

After six months, Turnbull has disappointed many Australians' hopes that he'd be something different — a better PM than the embarrassing incompetent he knifed. Not being Abbott made him popular for a while, but he has failed to manage any greater expectations. His policies are Abbot MKII and his pretensions to be an expert economic leader have been flatly contradicted by his indecision, inertia and death of ideas. A one man leadership debt and deficit on his own, Turnbull has created a policy vacuum his opponents have eagerly filled.

The Turnbull policy vacuum has enabled Labor to defeat the government's GST plans, at least this time around. Labor has also been able to set out its own policy ideas. It's a curious form of leadership. Under Turnbull the Liberal Party seems as if it's in opposition again, chasing Labor initiatives rather than making the running itself. And fobbing us off with promises.

It's too late to defend inertia by claiming all will be revealed in the Budget. Not only is the nation entitled to be having the debate now, voters have run out of trust in "later". We've been burnt before. The treasurer's promises, thought bubbles and retreats so far inspire no confidence in his grasp of economic policy. Yet Morrison is Turnbull's appointee.

Making Scott Morrison treasurer may have neutralised a political rival but it's provided the nation with an incoherent, gibbering economic basket case in return. Too many of Turnbull's cabinet choices have been similarly poor decisions. And, now, the relationship between treasurer and PM appears to have broken down irretrievably. Monday, Morrison learns from the media that his budget will be a week earlier; that his PM has decided to go for a double dissolution.

"The Treasurer has been completely emasculated and has no influence over tax policy or even the timing of his own budget," Shadow Treasurer Chris Bowen says in a press release. A side-lined treasurer cannot help the LNP campaign.

Hey Scott Morrison! Malcolm's started the clock ticking on an election...so...where the bloody hell are you? #auspol pic.twitter.com/SdO917GN7Q

Turnbull's a captive of his right wing on policy. Now he's making a bad case out of a bad policy to prove them wrong. The ABCC bill is bad law which under John Howard was a failure, which delivered much higher rates of injured workers, higher numbers of fatalities. When Labor gutted the ABCC, productivity soared.

Let's be clear. The claims being made for the ABCC are a shonky pretext for union bashing. Turnbull is consumed instead by a desperate need to control his own party dissidents. At the core of his campaign is a gamble to win over the right. The right of his party mistrusts Turnbull. It sees him as too soft and too pink to be trusted with the hard right heel of the Liberal Party — the dryer, meaner party of John Howard.

The case for the ABCC is based on lies and hyperbole. Leigh Sales could have reminded the PM of his massive Government misinformation campaign, in which Nigel Hadgkiss, its Liberal appointed Director of Fair Work Building and Construction (FWBC) falsely claimed there had been 1,000 crimes and 948 workplace breaches on building sites.

Under questioning in the senate estimates committee 22 October 2015, Hadgkiss backed off the crimes claim. There were 1000 complaints. Many were trivial. The Director admitted to the senate, complaints could include a drainpipe over someone's back fence.

They were not crimes, nor were there 948 workplace breaches. All up, there were only 36 proceedings brought in 2014/15, of which only 12 were successful. Despite all of this being in the public domain, it still suits the Liberal leaders to repeat this tosh in Parliament, with the whole stitch-up being faithfully reported as fact by The Australian.

If Turnbull wants to run an election campaign on the ABCC, he could make a start by cleaning up the lies. To reassure us that it's needed he must justify why the ABCC needs its extraordinary, security agency powers.

Just read this when LNP start to tell you about Union corruption. How many unionists prosecuted to date?? pic.twitter.com/Jz3Aid8yTf

Or he could come clean about his motives. This will not be an election about cleaning up the union movement or fixing a hamstrung construction industry and Turnbull knows this. His double dissolution bluff is all about besting Tony Abbott.

So far, on day two of the phoney campaign, Turnbull's early election gambit, which is based around a pretext based upon a lie, is looking like the rattle of a desperate man. Australians are being forced to go to the polls early because after six months of indecision, capitulation to conservative forces and a failure to meet any of the hopes his backers held for him, Turnbull has left himself with no other option. He may say it's about the ABCC and the need to set his country’s workplaces free, but for Turnbull, as always, it's all about me.