In the midst of the recriminations within the NSW Labor Party in the wake of the latest ICAC revelations, one politician can hold his head high, says Peter Wicks. 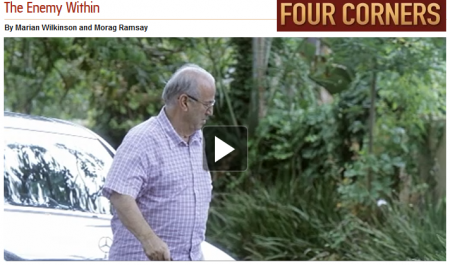 EVEN THOSE OF YOU who didn't watch ABC Four Corners last night (11 March 2013) already knew what a mess the NSW Labor Party was in prior to the last State election.

Those of you who did watch it were probably not too surprised at the carnage that was on display.

What looked like a revolving door of leaders, and factional power playing at its worst, has undoubtedly left a stain on the Party that will take more than a bottle of laundry detergent to remove, no matter what the secret active ingredient.

Thankfully, events in Victoria over the last few weeks have shown us that the disease is not just a NSW disease ‒ as it has often been described ‒ nor even just a Labor disease.

The Coalition in Victoria has members facing corruption investigations, MP's leaving the Party, and an embattled Premier face down and bleeding from the back, assassinated in his first term.

Any suggestion that Baillieu fell on his sword is the stuff of fairy tales. If he did indeed fell on a sword, then he must have fallen on it backwards and surrounded it with steak-knives first.

I won't go into the actions of the likes of Obeid, Tripodi and McDonald, there has been enough said about it already, and probably more to come. Nor do I want to throw my hat in the ring in the tussle between Bob Carr and Morris Iemma; I made my mind up on that one long ago.

What I did want to write about is the positive side in all of this — and there is one.

Yes, there are lessons to be learned from all of this, but not all of them are bad — one in particular is quite inspiring.

I think what people are looking for in their politicians these days, is someone who will stand up for what is right, someone who is true to their beliefs and works tirelessly for their community.

Someone like Nathan Rees, the Labor Party’s NSW MP for Toongabbie.

Many people remember Nathan Rees as a Premier who got voted out by his own Party, but that is not even half the story.

Nathan Rees lost the Party leadership, and therefore the job of premier, for trying to clean up the Labor Party’s act — the act that is now playing out at the NSW ICAC (Independent Commission against Corruption).

Nathan was the first, and the only, Premier to dump Tripodi from his positions, weakening the faction. He had the foresight, as well as the courage and the determination, to take on these factional heavyweights for the good of the Party and the State.

For his efforts, the factions came down on Nathan and he was savagely and publicly pushed from the top job.

Before the caucus meeting that saw Rees go in as premier and come out a backbencher, Nathan gave a speech in front of the press. The full speech can be seen here, however here are some excerpts:


Throughout the past 15 months, my ability to do good has been impaired at every turn.

A malign and disloyal group well known to the NSW community has made the business of government almost impossible.

The presence of such a group within the nation’s oldest and proudest political Party is intolerable.

Their treachery and disloyalty can be borne no longer.

For that reason, I embarked three weeks ago on a campaign to clean up NSW politics and break the hold of these malignant forces on the public life of our State.

Then later in the speech:


I will not hand the government of NSW over to Obeid, Tripodi or Sartor.

Under my leadership, there will be no going back.

The old regime will never again dictate the fortunes of our Party, nor will they regain the levers of control.

A government that is modern, ethical and progressive.

A government in which the people of NSW can have confidence, trust and respect.

Nathan put his hand up to lead the NSW Labor Party at a time when nobody else would, and his determination to clean up government is probably one of the most admirable, yet underrated, acts in Australian politics over the last few decades.

Not only did Rees have the guts to try to rid the Party of the cancer that is all over the papers and news today, but even after being betrayed and knifed for his actions he has had the determination to keep standing. After suffering such a humiliating blow, most others would slink off into the shadows and resign. Not Nathan; he made a commitment to his constituents and vowed to stay on and fight for them, so that is what he did.

The US military swear an oath to defend their nation from all enemies, domestic and foreign; Rees chose to defend his party from domestic corruption and paid a heavy price for it.

Rees chose to stay in politics and ran again in the 2011 election despite Labor being at its lowest point in living memory and facing annihilation. He fought a tough campaign and succeeded where many thought he wouldn’t and was re-elected, despite the odds being stacked against him.

Rees is a politician we call all learn something from, and someone we should all look up to no matter what side of politics you are from.

He fought against his own Party to rid it of corruption and to bring it back to its core beliefs and values. He has been a fantastic local member and has worked tirelessly for his community. He has the strength of spirit to stay on for the good of his electorate despite suffering a beating from within his own party.

In the world of politics, it is great to see someone with the strength of his convictions and the guts to follow them through. We need more leaders like Nathan Rees; leaders who put community interests ahead of self interests, even at their own peril.

In the midst of all the finger-pointing and accusation throwing going on in the NSW Labor Party in the wake of ICAC, there is at least one man who can hold his head high through it all.

Isn’t that what we all want from our politicians?