The importance of being Abbott

Tony Abbott's luck has run out, says Rodney E. Lever — not only do the people despise him, but the mogul who put him in power has now washed his hands of him.

Michael Moore, a former minister for health of the Australian Capital Territory Legislative Assembly, lives in the heartland of Canberra, close to the centre of our national government.

As a columnist for Canberra's CityNews newspaper, he has written regularly about the activities of a string of governments and the bevy of politicians who come and go inside the nation's capital.

I lived in Canberra for several years way back in the period when you could run into prominent politicians anywhere in the city and chat with them.

I remember one night when I shared a men's urinal, shoulder to shoulder with Robert Gordon Menzies. It was during an interval in a play we were both attending. The play was, I still remember even now, The Importance of Being Earnest, by Oscar Wilde.

Menzies stood there at the urinal and stared at me as if wondering who I was. I tried to look anywhere else in the embarrassment of meeting the great man in such circumstances.

But that was Canberra then, back in the early 1950s.

Michael Moore has written one of his columns referring to the "fair go" that once existed in Australia between the politicians and voters, when candidates stood on the back of a truck with a microphone or a "loud hailer" and harangued the public passing by, some of them yelling insults at the speaker asking for their vote. 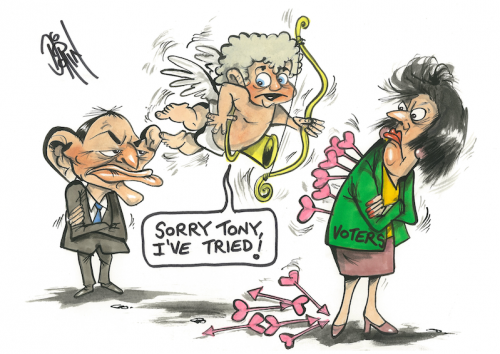 Moore / Hard fight for a fair go from the Liberals http://t.co/nZygy8Ut57

Moore reflects on the Canberra of today, where the fresh new Liberal government led by Tony Abbott started out with a tax break for mining companies and, at the same time demanding that average Australian families should "shoulder the burden," meaning the slugging of Medicare, the $100,000 charge on eager young Australians wanting to earn a university degree and a few other brutal changes to our national lifestyle.

The days of the "fair go" had dissipated into a smothered past and the deluded voters were angrier at their government than Australians had ever been, even in wartime.

The strange relationship that Tony Abbott struck with Rupert Murdoch was the fundamental base with which the new government began its term.

Murdoch has brushed off Abbott effectively by now. He had failed to carry out the Murdoch plans for Australia. For Murdoch, he no longer exists.

Tony is on his own now, caught between a rock and a hard place. The hard place is Peta Credlin whom he refused to sack as Murdoch had instructed, and the rock is the cold shoulder Murdoch always gives to brush off people who don't carry out his orders eagerly and willingly.

For all his new promises to the voters, it is only a matter of time before Abbott has to pack his bag and leave The Lodge forever. The Labor Party is eagerly awaiting a return to power Federally, as they have just done in Victoria and Queensland.

The rules must be followed. Bronwyn Bishop says so!

Speaker Bronwyn Bishop rules the question out of order and Labor erupt in laughs. What a farce. #auspol #qt pic.twitter.com/6AIbnnpewt