MIDDLE CLASS welfare. It’s a topic guaranteed to ignite both sides of the political spectrum in the kind of arm waving and foot stomping that would make a toddler proud. Talk of tinkering sends a shudder of fear through the mortgage belt.

To the left, it’s all about wealthy households taking more than their fair share, usually as a result of sneaky, vote-buying strategising by duplicitous centre-right politicians. Hello, Johnny Howard.

On the right side of the political table, it’s usually bemoaned as the central cause of the budget emergency and all that’s wrong with Australia’s over-entitled hoi polloi. Thanks for nothing, K-Rudd.

Middle-class Australia cops a pre-budget slap over "what's in it for me?" culture http://t.co/3fU6QAOhUz pic.twitter.com/lNYHkr9qkj

A recent study by a group of academics from Curtin University, published in the Australian Economic Review, finds little evidence to support many of the widely-held assumptions which usually accompany such debates.

The study by Alan Tapper, Alan Fenna and John Phillimore based at the John Curtin Institute of Public Policy, analysed Australian Bureau of Statistics data from 1984 to 2010. They found no evidence of a significant increase in "net" social support (and "net" is the key point here) to the middle-income quintiles. 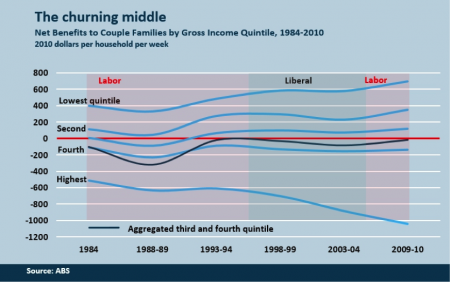 The study goes on to explain,

‘critics seem to consider the “welfare” aspect of “middle-class welfare” in gross rather than net terms and disregard the impact of household taxation.’

This graph shows that, despite some oscillation, when the third and fourth quintiles are aggregated, there has been no significant change since 1984 in net transfers for those between the 40th to the 80th percentile, or the middle-income 40% of the population. The bottom 40% made strong gains over the same period, whilst tax receipts from the top 20% increased markedly.

This means that while middle class welfare in gross terms did increase during the period, when that amount is adjusted for increases in taxation on a quartile basis, the increase in welfare to the middle 40% effectively evaporates. Yes, the middle income group received more welfare but they also paid more in taxation. Each effectively cancelled the other out.

So what actually happened for the middle income groups was an increase in “churn” of their transfer dollars. They paid more in taxation to various governments during the 26-year period, and additional receipts were then returned in the form of new benefits and entitlements.

From 'middle-class welfare' to Robin Hood. The facts on Australia's distribution of wealth https://t.co/xgE6f8d9qC

The research also shows no significant net difference in social spending toward the middle income groups whether Labor or the Liberal party held government.

Compared to other Organisation for Economic Co-Operation and Development (OECD) nations, Australian spending on welfare falls below average. The 2014 OECD average of welfare expenditure as a proportion of GDP was 21.6%, while Australian expenditure was 19% of GDP. To put this in context, this amount was marginally lower than countries such as United States, Poland and the Czech Republic.

The report also noted that transfers from the top quintile to the bottom quintile actually increased during this period, which means that the vertical redistributive nature of the welfare system is working as intended.

As the authors of the study note,

‘redistribution has been funded by a rapid growth in private incomes of the top quintile — exactly what one might expect or wish for from a progressive welfare state.’

Despite all the hoopla and politicking it appears Australia’s welfare system is both lean and effective.