Hillary's knockout performance will overturn pre-debate polls showing her as unappealing as Trump. She's well on her way to the keys of The White House, says contributing editor-at-large, Tess Lawrence.

DONALD'S TRUMPET was off key, whilst Hillary was on message.

The Grand 'Ol Party's Donald Trump, with masterly and frightening ease, has hijacked the Republican Party as if it were a vacant block of real estate just begging to be turned into a branded Trump tower leasehold.

Once the Joker in the pack, Trump has morphed into a serious contender, now redneck and neck with the Democrat candidate Hillary Clinton, on her second attempt to become the president of the United States.

Polls taken just before the debate indicate both contenders are equally unappealing to the people.

But Tuesday night's (U.S. time) Grate Presidential Debate is set to change all that.

Without question, Hillary won the first of three presidential debates. It made compelling television to see Hillary trumph “the Donald” who curiously, constantly sniffed throughout the debate.

Did anyone else notice or is it just me ?

Although Trumph's height is said to be around 6ft 2-3inches, and Clinton 5ft 4-5 inches, he failed to politically intimidate the diminutive former secretary of state.

As she reminded us, in the first term of President Obama's administration, she was part of the team that ''took out” al-Qaeda leader Osama Bin Laden in 2011.

We were led to believe that Clinton's lectern had been modified so that on television, both speakers would appear on an equal footing. That clearly was not the case. 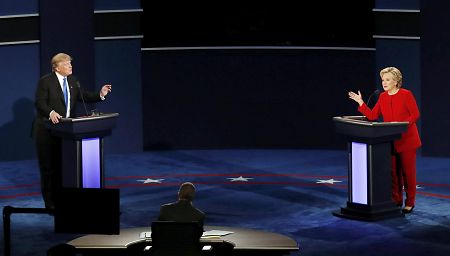 Clinton and Trump show their difference in height. (Image via http://g.wsj.net/elections/2016/)

However, that worked to Hillary's advantage. Trump appeared all ego, bravado and brawn, whilst his rival for the Oval Office challenged not only his temperament but his brain.

A not-for-profit university, with alumni as diverse as The Godfather director, Francis Ford Coppola and notorious stockbroker fraudster Bernie Madoff, this is the third consecutive time that Hofstra has hosted the Presidential Debate.

The cosmetic grooming of both candidates is pertinent to the study and analyses of political combat.

He wore a dark suit and the ubiquitous blue tie so beloved of our own Liberal Party. She wore a bold China Red trouser suit. Both seemed to have shed a few kilos in past weeks.

TRUMP: NO COCHINEAL FAKE TAN OR BLACK IS THE NEW ORANGE HAIR

There was little sign of the cochineal coloured fake tan favoured by the faker Trump, or the orange-hued hair dye.

Instead his hair was more whitish than usual and his matte studio make-up heavily contoured to make his face look less bloated and jowly. The cut of his suit and his long line jacket was almost a frockcoat, all designed to make Trump look slimmer but the shoulders were ill fitting and simply made his imposing stature look unkempt.

Clinton's team, likewise, had her streaked hair styled in what I call the “Washington Wave”, not disimilar to that worn by Nancy Reagan when I flew with her on Air Force One. Softening, flattering but not too girlie.

At times on the gruelling hustings, like Trump, Clinton has looked haggard, puffy, tired and unwell.

CLINTON AND TRUMP: BOTH FACES CONTOURED. D'YA HEAR THAT KIM?

Indeed, now we know after her near collapse at the September 11 Memorial Ceremony, that she has been unwell with debilitating and dangerous pneumonia.

Image is almost everything. So is physical demeanour and body language is a dialect we can all interpret for ourselves. Trump hardly ever smiles, have you noticed that? He snarls.

Clinton has constantly had to fight the perception that she is cold and distant and lacks empathy.

She and her team had clearly worked on overcoming this for the first debate. Although her smile was well rehearsed, she got closer to the audience than at any other time in the campaign.

She was hard hitting and Trump rarely got away with his habitual vacuous filibustering. She was like Mohammad Ali in the boxing ring, luring Trump to swing grandiose but empty punches, that continually failed to hit his target.

Round by round: Our analysts say Clinton outpunched Trump during last night's debate https://t.co/eg6KHi2WWG pic.twitter.com/6FMNO0CdRG

TRUMP CRASS AND FLASH TRASH DID HIM IN

His self-aggrandisement about a Trump building on The White House's Pennsylvania Avenue further established his crassness and flash trash, as did this ghastly venal response to Clinton:

Here are some more killer exchanges from the debate's transcript that prove that unless he has a brain transplant in the interim, Trump will lose the presidential campaign.

Well, let's stop for a second and remember where we were eight years ago. We had the worst financial crisis, the Great Recession, the worst since the 1930s. That was in large part because of tax policies that slashed taxes on the wealthy, failed to invest in the middle class, took their eyes off of Wall Street, and created a perfect storm.

In fact, Donald was one of the people who rooted for the housing crisis.

"Gee, I hope it does collapse, because then I can go in and buy some and make some money."

Well, it did collapse.

That's called business, by the way.

Third, we don't know all of his business dealings, but we have been told through investigative reporting that he owes about $650 million to Wall Street and foreign banks. Or maybe he doesn't want the American people, all of you watching tonight, to know that he's paid nothing in Federal taxes, because the only years that anybody's ever seen were a couple of years when he had to turn them over to state authorities when he was trying to get a casino license, and they showed he didn't pay any federal income tax.

That makes me smart.

So if he's paid zero, that means zero for troops, zero for vets, zero for schools or health. And I think probably he's not all that enthusiastic about having the rest of our country see what the real reasons are, because it must be something really important, even terrible, that he's trying to hide.

Washington University will host the next presidential debate on October 9th.

The thing is, will he turn up? He's running scared and he is no match for Clinton, despite his tough talk and excuses.

His dismal performance has ignited Trump's towering inferno. He's on the ropes.

And Hillary is well on her ascent to her political Everest and the keys to The White House.

I don't imagine she'll be inviting her new neighbour Donald Trump in for a cuppa anytime soon.

BUT THE WORLD NO LONGER CARES Hillary beats Trump in round one https://t.co/o5OTrjKbIm @IndependentAus