The good, the bad and the unpredictable

Australia has been in fast reverse on climate change action with Tony Abbott at the helm, however his plans have been turned upside down by Al Gore and Clive Palmer. Lyn Bender attempts to make sense of this mismatched trio.

THE RECENT STARTLING EVENTS in the Senate should give us reason to hope that democracy has not been stifled, despite Tony Abbott's worst intentions.

Abbott’s heavy-handed attempts to order the Senate to do his bidding have proven less successful than he seemed to expect. His grandiosity and narcissism, which cannot brook any opposition, has been dealt a blow. Much of his atrocious budget seems unlikely to get through. And the unpredictable Clive Palmer is beating him at his own game of back flipping.

Furthermore, Palmer has accused the Abbott Government of trying to pull a swiftie, by gagging debate to disguise an unacceptable amendment. Palmer proposed a strong amendment to ensure carbon tax savings were passed onto consumers. Ricky Muir Palmer and Palmer United Senators have voted with the Greens against the repeal of the carbon tax, which may yet go down, though not easily.

Just as we were wondering what to make of the latest climate deals done over dinner lunch or breakfast by three extreme and enigmatic personalities – Al Gore, Clive Palmer and Tony Abbott – we are beginning to see some of its results. The survival of Australia’s climate policy now hangs in the balance.

So what drives these three players? Perhaps we can draw hope that one or more of them might yet save Australia’s carbon pricing policy in some form.

The media has been buzzing with questions.

Is Al Gore really a good guy; or just ‘crazy ‘Clive Palmer’s fool? What on earth makes Clive Palmer tick? Has Abbott, the certified bad guy, been virtually sidelined as a power player. The new Senate players were greeted with disparagement and chortling from much of the press, but they seem to be taking their jobs very seriously and may even get the last laugh. Tony Abbot has many enemies and some of them are now in the Senate.

Commentators politicians and the media were completely caught off guard when Clive Palmer – the jokester, trickster, mining magnate nouveaux politician – appeared alongside the hero of the climate change movement. Palmer stood beside Al Gore, the man with globally acknowledged charisma and gravitas, declaring himself a convert  to climate change science. He would still vote for the axing of the carbon tax but conditions applied.

The Coalition did a little dance in parliament. Abbott’s vow to kill the carbon tax would at last be achieved. The Coalition quickly sought to claim this as a victory.

From the Murdoch press:

“What we have seen today is vindication,” Environment Minister Greg Hunt told reporters in Canberra.

“The announcement this evening means that the Senate will be following the coalition’s plan.”

The Senate was being brought to heel. It was ending in the Government’s favour.

But many aired their confusion.

I received a group email from Christine Milne the next day headed:

Some commentators announced that, instead of enhancing PUP leader Palmer’s prestige, the joint appearance had sullied Gore’s credibility. After all, only three months before, Clive Palmer was denying the strong impact of human emissions on the earth’s climate.

Others saw the public pairing as a victory for  environmentalists and climate action.  Palmer may have announced his intention for his new PUP senators to vote to repeal the carbon tax, but important conditions applied. The key pillars of the former government’s green architecture would be saved.

So is Clive Palmer – called fat and mocked mercilessly – seeking his own salvation through saving the earth? Or is he just another, rich opportunist, seizing his moment on the podium alongside altruistically credentialed Al Gore? Does Clive want to find his fifteen minutes of ethical fame, or is it just another brick in his wall of narcissism?

In his favour he has consistently maintained a solution to refugee deaths at sea would be to fly them directly to Australia. But it seems only yesterday that he was declaring that global warming was 97 per cent due to natural causes. Yet, in a magical twist of seeming enlightenment, he has now embraced what over 97 per cent of scientists are saying.

Watch and note his admiration of Al Gore, which comes across as being genuine:

He seems to be quietly bursting with pride standing alongside former U.S. Vice President Al Gore, whom he calls “a great leader.”

Palmer is speaking more slowly than his usual spray of one-liners. His higher cortex and reflective brain seems to be engaged.

Tony Abbott has been left looking sheepishly relieved. He will at least now be able to repeal the carbon tax as promised. But Australians are left literally gobsmacked.

Who can we trust and who has integrity? Or, put simply, who the hell are these guys anyway?

On the other hand, there is Al Gore:

Then there is the wildcard — Clive Palmer:

What can we make of this? Are Clive and Gore really on the same page? Can we trust Clive to hold fast to his bargain, and what of Abbott?

So what is the view of good guy, Al Gore?

Al Gore's take on Clive Palmer: deep down he has a sense of social justice and keen sense of right and wrong http://t.co/bUup8JaSvU

Watch here as Gore stresses that he “likes” Clive and

“There is no question in my mind that he wants to make the world a better place."

He goes on to say “he wants to do the right thing” and that he cares deeply about social justice.

On Abbott, Gore’s opinion is not so complimentary.

Abbott is still a “denier” and that he should

Direct action – giving money to polluters to stop polluting – is “a dodge” and “silly”.

While Gore is “disappointed” that the carbon tax will be repealed, he is delighted with what has been supported for retention by the Palmer United Party.

“It’s not the Labor way or the Liberal way; but the right way that counts.”

Perhaps we can hopefully conclude that Clive is having his moment of truth. And as the PUP senators’ votes may be crucial; this can only be a good thing for us all and hopefully the climate.

Gores final opinion is that climate denial is “extremely odd and self-destructive” and will be relegated to “the dustbin of history”.

We can only hope that a changed Clive Palmer genuinely agrees. 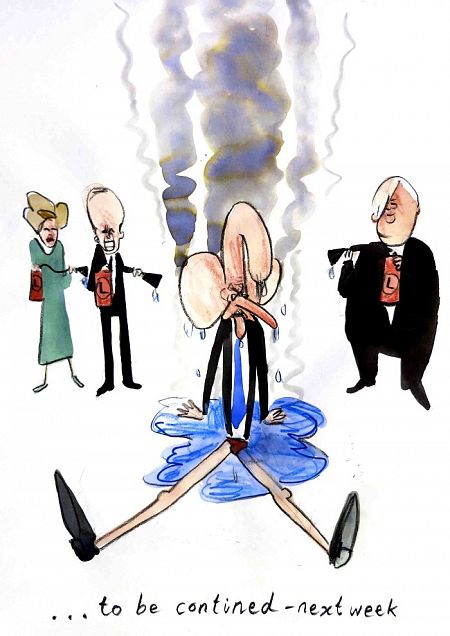