Cruel arithmetic and the future of Turnbull: Herbert holds the key

The Coalition under Malcolm Turnbull have gained a bare majority of 76 seats — but will he get to 77 and why does it matter? Managing editor Dave Donovan crunches the numbers to predict the winner of the last in-doubt seat.

COUNTING CONTINUES today in the last "in doubt" seat of Herbert, where LNP sitting member Ewen Jones leads Labor challenger Cathy O'Toole by just 12 votes. It is incredibly close and could fall either way today. 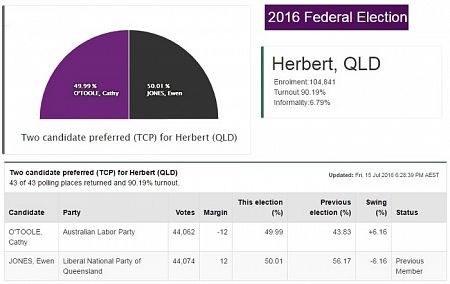 The lead has seesawed between Jones and O'Toole over the last two days and the smart money seems to be on Jones to end in front — but as you will see later in the piece, I'm not so sure about that. But whatever way the crumbs fall — the results will soon be in. Maybe today, after a seeming eternity of counting and conjecture, we will know the final Federal election result.

If Jones wins this seat, the Turnbull Government will have a majority of two rather than just one. For Turnbull, this could be the difference between being toppled by Christmas or leading the Government until the next election — and standing a solid chance of further electoral success then.

The difference between 76 and 77 seats may not seem so much and so it isn't — arithmetically, at least. But in practical terms, it is the difference between being held to ransom by every Coalition backbencher with a grudge or agenda, and sliding by on Easy Street, more or less.

You see, Turnbull is not popular in the Coalition — especially not amongst the disaffected far right flank, led by such renegades as Senator Cory Bernardi. Bernardi, whose politics and personal style falls just slightly to the right of Attila the Hun (what Janet Albrechtsen calls "centre-right"), has just set up his own proto-party – the Australian Conversatives – which has been described as a  "conservative life raft" for Bernardites should things under Red Mal become just too leftist and intolerable.

Janet Albrechtsen saying that "the left is all about emotion, while the right is all about facts and logic". Srsly. pic.twitter.com/8SY6bypIkE

Does Bernardi have any supporters in the Lower House? With a slender one seat majority, Turnbull will have to negotiate with outliers over unpopular initiatives. Thus, his own unruly backbench may become his most obdurate opposition.

For instance, if the crossbenchers and Labor are against a proposal – say, a divisive gay marriage plebiscite or retrospective superannuation changes – it would only take one rebel backbencher to cause a humilating loss by Turnbull on the floor of the Parliament. With a majority of two, it would require a conspiracy by Coalition backbenchers – a lower house "Rebel Alliance", if you will – to overcome the Government. That seems far less doable and likely.

Indeed, with a majority of only one, an unpopular Turnbull Government some time in the future could even be ended by a backbencher with a grudge. For example, a disgruntled backbencher could at some stage in some hypothetical future, side with Labor and the crossbenchers in a vote of no-confidence in the prime minister on the floor of the House and so bring down a shaky Turnbull Government. It is possible.

Of course, you may well say, no self-respecting "Australian Conservative" would ever do this and help to bring in a Government of equality-seeking socialists, but it is certainly a bargaining chip every power-hungry backbencher would hold in his or her hands, giving these MPs immense personal power over Turnbull. With a two seat majority, this bargaining chip becomes next to worthless.

With a one seat majority, Turnbull is on the edge, at the beck and call of every backwater conservative seeking to nobble, frustrate and foil him. With a two seat majority, the PM is alert, but not alarmed. And so, Herbert holds the key.

The deadline for the receipt of all postal and other votes has now passed, so we are now into the final stages of counting. We should, therefore, unless the AEC is even more insufferably slow than usual, we should have a result in Herbert today. Of course, this result will be subject to a compulsory recount if the final margin is less than 100 votes, as seems likely.

So, I crunched the numbers for the Townsville seat over the weekend.

Based on the voting patterns seen in Herbert in this election so far, I forecast Cathy O'Toole to reverse the difference we saw at close of voting on Friday and win by about 13 votes.

The forecast presumes that the trends in all the different vote types – absent, provisional, postal and declaration – will continue in exactly the same way we have seen in this count so far. They may not, however given that we now have a statistically significant sample size for all vote types in this electorate, I would suggest it is a reasonable assumption.

Of course, this is a slim victory indeed and even a small variation in the trend for any vote type could swing the count one way or the other.

For instance, provisional votes are currently falling to O'Toole by around 60-40. Though 762 provisional votes have been processed, only 166 formal provisionals have so far been declared formal and counted, thus making the margin of error larger in that class. If the gap between O'Toole and Jones in provisionals falls to below 55-45 – more in line with the other vote types – Jones will probably win.

My detailed analysis is below: 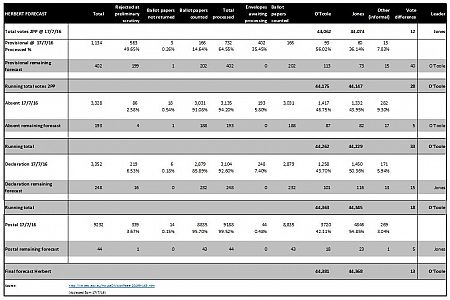 If O'Toole wins, of course, Turnbull will be denied that crucial 77th seat and so will be at the mercy of all ratbag rightwingers in the Coalition ranks.

So, turn your eyes to Herbert, friends, for the race that may decide the fate of a nation — or at least of a Malcolm.

Managing editor Dave Donovan is a qualified accountant and former statistician. You can follow him on Twitter @davrosz.

Turnbull donated a million to the Libs during the campaign. Nonsense! More like $2 million. https://t.co/2RQGLLKLRP pic.twitter.com/TYqtQl4MbQ

Know sooner. Subscribe to IA for just $5 (or less) instead.