The fallacy of fiscal austerity and the myth of crowding out

The May budget is expected to announce a series of deep spending cuts to "balance the books". Sydney University economist Dr Matthew Smith says (via The Conversation) these austerity measures are not only grounded in false economic theory, but could be catastrophically counter-productive.

IN THE LEAD-UP to the Federal Government’s budget in May, we’ve been told to expect deep cuts in government spending. Such a policy is said to contribute to a short run decline in Australia’s economic activity, but will lead in the longer term to a greater sustained expansion as the private sector grows and blooms like flowers in spring.

This argument is a fallacy — grounded in a false economic theory. I’ll explain why.

The fiscal austerity argument is essentially based on 'crowding-out', which contends that expanding the size of government will in the long run crowd out the private sector. So shrinking government through fiscal consolidation will release resources enabling the private sector to expand.

The fundamental basis for this argument is that competitive market forces push the economy toward a state in which resources, capital and labour, are fully employed — referred to as 'full employment'.

In economic theory, this long run tendency to full employment is essentially based on the 'substitution principle' — that the demand for labour and capital will each functionally increase as their respective prices decline in relation to each other.

The theory can be illustrated this way. Suppose the economy is in a downturn and there is unemployment. The competition for jobs would then drive down the real wage of workers in general and, because the cost of employing people has fallen, it will be more profitable for firms to employ a more labour-intensive technique of production. So they substitute labour for capital, increasing the demand for labour.

However, if there is unemployment, then it means there is not a sufficient demand for products in the economy. So, for the economy to adjust, there requires also to be a reduction in interest rates to generate private investment spending and stoke aggregate (or total) demand, to get the full-employment caravan back on the road.

This investment response also relies on the substitution principle. Lower interest rates make borrowing cheaper and make it more profitable for firms to employ a more capital-intensive technique, brought about by higher expenditure on capital equipment.

A significant group of economic writers have objected to this tendency to full employment, traditionally on the grounds that even in conditions of unemployment, wages will not decline as is required by the theory.

But there is a much more substantive scientific objection to this theory of a tendency to full employment.

Some 50 years ago, leading theorists in economic science, predominantly from Cambridge University and the Massachusetts Institute of Technology joined in what is called the “capital debates”. These debates were controversial because they demonstrated some serious logical inconsistencies in the traditional theory of production and distribution. They essentially revolved around the problem of measuring the total stock of capital of an economy as a homogeneous quantity when it consists of heterogeneous capital goods (that is, different kinds of machines, equipment).

What the capital debates established is that the substitution principle – which underlies the theory of adjustment to full-employment – is only valid in an economy which produces one type of commodity. So, for an economy, such as Australia, which produces a multitude of different goods (most of which are used as inputs for producing other goods) using a variety of different production methods, the substitution principle is not valid — completely undermining the theory.

What this result means is that in general, if real wages do decline due to unemployment, it is as probable that the demand for labour will decline as it will increase, as firms find more capital-intensive techniques are more profitable than labour-intensive ones. So demand for labour declines, substituted by capital.

The consequence is that there is no predictable relationship between real wages and the demand for labour and the rate of interest on capital and the volume of investment expenditure. Hence, the economic theory which supposes that competitive forces cause a long run tendency to full-employment output is, in general, not valid.

Deprived of this theory, crowding-out has little merit — and fiscal consolidation leading to private sector growth, has little theoretical support. As I said at the beginning, it is a fallacy.

It can of course be argued that a fiscal policy which changes the composition of government expenditure and the tax mix could in the long run induce stronger growth — but that would rely on contestable assumptions about how in general the private sector responds in terms of capital spending, consumption and technical innovation to increase productivity. It could not rely on a theory that competition operates as a tendency to a full-employment economy.

In fact, by increasing the rate of labour unemployment and unutilised capital equipment in the short term, fiscal consolidation runs the risk of contributing to slower longer term growth.

Higher unemployment tends to undermine consumer confidence and spending, while firms with greater unused productive capacity are likely to downsize their investment expenditure so that the overall growth in private investment is slowed.

Hence, the most useful thing governments can do to promote stronger trend growth is to use fiscal policy to prevent significant downturns in the economy, which undermine the confidence to spend.

According to the statistical data of the International Monetary Fund, in the years since the UK’s Conservative-Liberal coalition government chose to implement an austerity fiscal policy in 2010 – a year in which the economy recovered from the depressing effects of the global financial crisis – Britain's annual growth rate has declined significantly, with the average below 1%.

More spectacularly, in the several years since the European sovereign debtor countries of Spain, Portugal, Italy and Greece each implemented fiscal austerity, their economies have contracted sharply with no signs yet of any sustained recovery.

If it is indeed the objective of policymakers to wind back public debt as a proportion of GDP, then the best policy is one which promotes sustained economic growth and a healthy growth in tax revenue — that will not be achieved by fiscal austerity. 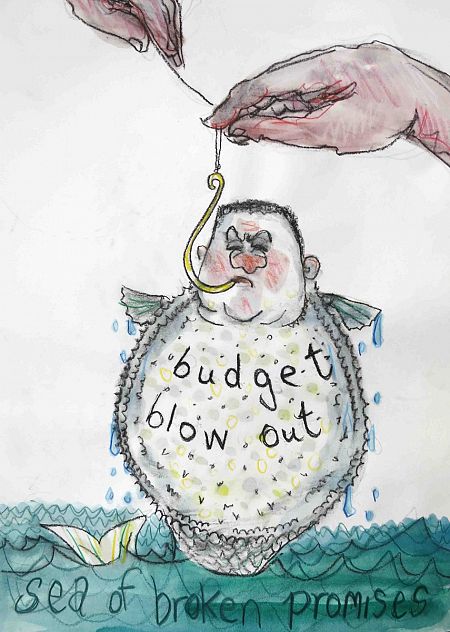