The Eden-Monaro By-election proved to be an entertaining democratic flirtation offering something for everyone, writes Dr Binoy Kampmark.

ELECTIONS should be cherished as a chance for voters to engage in the democratic ritual called “voting for your representative”. However, many do not care a jot, at least in Australia, that a representative is a fusty person with no other purpose in life than filling the ballot position. A good portion vote for the party their parents did. Once elected, soon forgotten.

Australia also offers the grandest of political processes and little in terms of hefty ideas in the political arena. The light on the hill can be reduced to a set of boxes on a preferential voting system. The figurehead is stuffing in a procedure that is revered over the substance of what is offered.

That system is its own enemy. Compulsory voting systems produce drizzles of boring predictability, punctuated by the rarest of surprises. One exception can be the by-election. In the Westminster system, the byelection is tentative titillation, distraction, flirtation. It is a night out from your old party spouse, a tryst off the track.

Swings are permitted, often on a grand scale. Vote for fringe parties. Knock yourself out, but never up, since commitment is not necessarily going to be on the cards. As a voter inconvenienced by the realisation that you will have to vote again very shortly, you can tell your traditional party to take a good look at itself as you pack in your lot with the opposition candidate for a steamily brief holiday away from reality. The Australian by-election, in other words, is a chance to have an alternative ballot "shag".

The Eden-Monaro ballot shag had a little bit of everything for the commentators and candidates. Would Prime Minister Scott Morrison’s bungled handling of the bushfire crisis bite? Where would the coronavirus crisis and the Federal Government response feature? It also offered the Morrison Government a narrative that they would not be quite so hammered as they normally would be in these small contests. It gave the Labor Opposition Leader Anthony Albanese a chance for his party to hold on to a seat, which he genuinely risked losing. 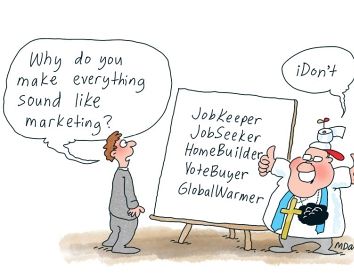 The political class acts as if the Government should be taken seriously, but it's grossly incompetent, corrupt, deluded. That the Opposition can’t beat them is a calamitous failure.

It also provided the Nationals with a huge headache, largely in the form of NSW Deputy Premier John Barilaro. Barilaro had been initially keen on nominating for the Nationals, hoping to leapfrog from state politics to the Federal parliament. But things did not quite turn out that way. In May, he attacked fellow National, Deputy Prime Minister Michael McCormack, for offering insufficient support for his candidacy.

“You will never be acknowledged by me as our leader. You aren’t. You never will be.”

For the briefest of moments, there had been a suggestion that the Coalition Government would concede to only running one candidate in the fight, but that proved chimerical. The Liberals’ NSW State Transport Minister Andrew Constance initially threw his hat into the ring — an effort that lasted all but 24 hours. Barilaro, champing at the bit, was none too pleased, describing his contesting colleague as a “c*nt”.

Constance, in turn, reflected on the parlous state of politics in Australia:

“I need to remain focused on the bushfire recovery and be grateful for the opportunities I already have.”

Seeds of confusion had been sown.

McCormack was also agitated: having Barilaro in the party Federal ranks might add unnecessary dynamite to his already fragile hold on power. The red carpet treatment would not be forthcoming.

“To feel threatened by me clearly shows you have failed your team and failed as a leader."

With the bucking Barilaro and wounded Constance out, the dust settled — in a fashion. A three-way contest unfolded featuring Labor’s former Bega Mayor Kristy McBain, the Liberals’ Fiona Kotvojs and Trevor Hicks for the Nationals.

The Liberal candidate had attracted attention for her group submission in support of the Religious Freedom Bill in 2018, which included the following:

'Religious schools and organisations should be allowed to positively discriminate in employment for people who adhere to their beliefs on marriage.'

“She has a more conservative position on climate than Tony Abbott.”

The vote – and tedious commentary – wore on through the Saturday evening television coverage. Victory in the seat would have changed little in the lower house for either party, but the chattering politicos thought otherwise. Governments should lose such elections; opposition parties should win them. This had been the case for a century. But Morrison’s personal popularity is high, though it has failed to translate into voting attitudes; Albanese seems to exist in a state of permanent political eclipse. There was a sense that Labor might fail in retaining Eden-Monaro and, in so doing, light the fires of a potential coup against their leader. Much hot air was emitted.

Each politician on the ABC election panel knew their brief. Senator Kristina Keneally – who has often been more a heel of Achilles for the Labor Party than its talisman – was doing her best to convince that Labor should be doing far worse, the seat being “notionally Liberal”. Her counterpart in debate and commentary, Environment Minister (Australia still has them) Sussan Ley championed the credentials of the Prime Minister. The ABC’s Jane Norman did her best to steer proceedings and prod matters; election analyst and perennial psephologist Antony Green held court.

Ultimately, the victory claimed by McBain was one of a small-margin and even smaller effect. Commentators and pundits were squeezing blood from the stone, but it seemed that Labor had held on with the unremarkable phenomenon of preferences, cushioning a fall of three per cent in the primary vote.

Rupert Murdoch’s attack dog The Australian growled with resentment at what it saw as the “bastardry” of Barilaro.

Norman observed that the result:

“...simultaneously helped to strengthen Anthony Albanese’s leadership of the Labor Party while giving Scott Morrison a shot in the arm, having withstood a possible protest vote over his handling of the bushfire crisis.”

Some Labor insiders, such as the long-in-tooth Joel Fitzgibbon, felt that the dip in the primary vote was insufficient for the ALP to win Federal office, though expressed satisfaction at the party’s move towards the “sensible centre”.

In other words, it was a by-election with a little something, however small, for everybody.